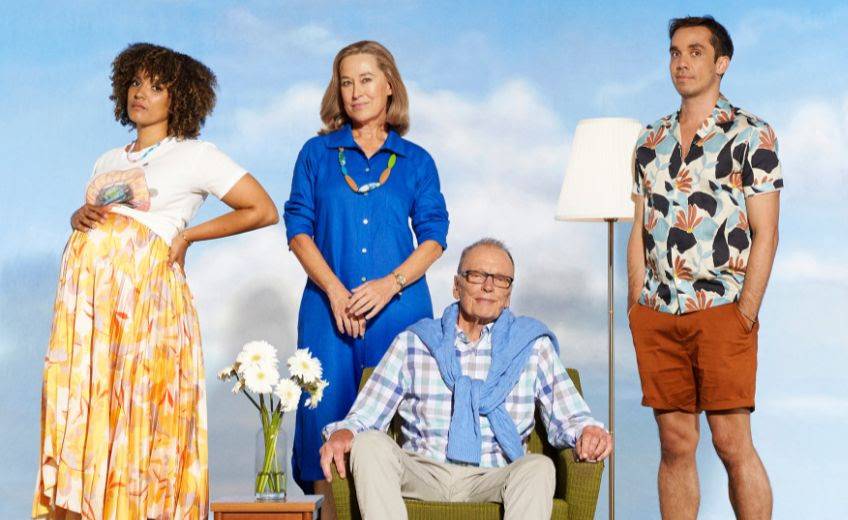 Grand Horizons explores what happens when older couples separate after many years of marriage.

Stage legends John Bell and Linda Cropper are set to unite in a play about a couple who, after 50 years of "married bliss", decide to divorce much to the dismay of their children.

Bell - well known as one of Australia's great Shakespearean actors and founder of the Bell Shakespeare Company - plays octogenarian Bill while Cropper, who played matriarch Geraldine Proudman in the TV series Offspring, is his wife Nancy in Sydney Theatre Company's production of Broadway comedy Grand Horizons.

Named Grand Horizons after the retirement home the couple find themselves in, the play explores a family turned upside-down and takes a look at the enduring and unpredictable nature of love.

As Nancy and Bill's two adult sons struggle to cope with the news, they are forced to question everything they assumed about the two people they thought they knew best.

Cropper, who is returning to the STC stage for the first time in 11 years, said it was exciting to be telling a story that "puts an older woman at its heart".

Bell said it was "fascinating" to deconstruct family dynamics and delve below the surface of everyday behaviour.

"Grand Horizons will resonate with families facing challenges with parents going into care, with children who fear the established family dynamic disturbed by parents acting unconventionally and with older people reassessing the fruits of a lifetime's marriage," he said.

The play, written by Bess Wohl, debuted in early 2020 on Broadway and was originally set in America. Now STC's resident director, Jessica Arthur, has recontextualised the production to an Australian setting and the show is set to have its Australian premiere at the Roslyn Packer Theatre in June.

Arthur said the complex family dynamics in the play were universal and had been written with "such care" by Wohl that it was easily adaptable to an Australian context.

"Australian audiences will find individual resonances with the detailed characters and situations that are so beautifully crafted by Bess Wohl," Arthur said.

"I am keen to mine the complexities of the characters. I am also excited by the fact that it offers up perspectives and experiences that we don't see often enough onstage."

Grand Horizons is playing at the Roslyn Packer Theatre from June 7 to July 3.