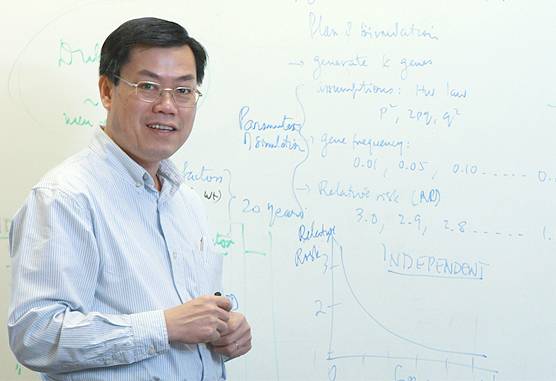 WORK IT OUT: Professor Tuan Nguyen has helped develop the skeletal age calculator. "It's never too early to start thinking about bone health," he says.

Whats your skeletal age? It may well be much older than your date of birth especially if you have osteoporosis or a fracture.

ARE YOU at a higher risk of deadly fractures? Sydney scientists have developed a 'skeletal age' calculator which predicts your bone fracture risk.

Reseachers at Garvan Institute of Medical Research have come up with a model to predict the biological age of bones that may improve the management of osteoporotic fractures.

The skeletal age calculator gives a personalised estimate of an individual's risk of bone fracture and premature death.

It will be accessible to doctors and health professionals and aims to better identify those at risk of a first bone fracture and subsequent fractures, and also estimates how fractures impact life expectancy.

Osteoporosis, a disease which reduces bone strength and increases bone fracture risk, is a major national health issue and estimated to affect over 900,000 Australians.

Lead author Professor Tuan Nguyen, head of the Genetic Epidemiology of Osteoporosis Lab at the Garvan Institute, said there is a lot of complacency in the community when it comes to bone health.

"A fracture shortens life expectancy, even more so in men than in women" he said.

"Only 20 per cent of those with fragility fractures are taking approved treatments for osteoporosis, which could significantly reduce their risk of further fractures.

"We hope that calculating a person's skeletal age, which may be much higher than their actual age, will identify those who are at higher risk of fractures and encourage them to speak to their doctor about how to better manage their condition."

From age 50, bone fractures affect one in two women and one in three men. For women, the lifetime risk of a hip fracture is equal to or higher than the risk of developing an invasive breast cancer.

With each fracture, the risk of future fracture increases two-fold and studies have shown that pre-existing fractures increase the risk of premature death by about 50 per cent in both men and women.

One in three adults over 50 dies within 12 months of sustaining a hip fracture.

There are already existing models to predict the risk of an initial fracture, such as the Garvan Fracture Risk Calculator that is already available to doctors.

But it remains unclear why some individuals do well after an initial fracture, while others go on to sustain further fractures and have a higher risk of mortality.

The team set out to develop a model to complement existing tools, which could simultaneously predict an individual's risk of subsequent fractures and consequently, their chance of premature death.

The team used data from Garvan's Dubbo Osteoporosis Epidemiology Study, which was started in 1989 and is the world's longest-running large-scale study of osteoporosis in men and women.

Their model incorporates an individual's age, bone density, history of previous fractures and other health conditions to calculate a personalised estimate of 'skeletal age'.

"In our new model, we quantified the intricate transitions between fracture, re-fracture and mortality. We define skeletal age as the age of an individual's skeleton that results from their risk factors for fracture," explains Professor Nguyen.

The team is now developing an online calculator, which doctors will be able to use to calculate their patients' skeletal age.

The researchers hope it will be a valuable tool for initiating discussions between health professionals and their patients on how to improve bone health, which may involve medication, exercise, increasing dietary calcium and getting enough vitamin D.

"The key message of this study is that it's never too early to think about your bone health," says Professor Nguyen.

"Do not wait until a fracture has occurred to take preventive action. If your skeletal age is higher than your actual age, you should seek medical advice from your doctor on how to manage the higher risk."