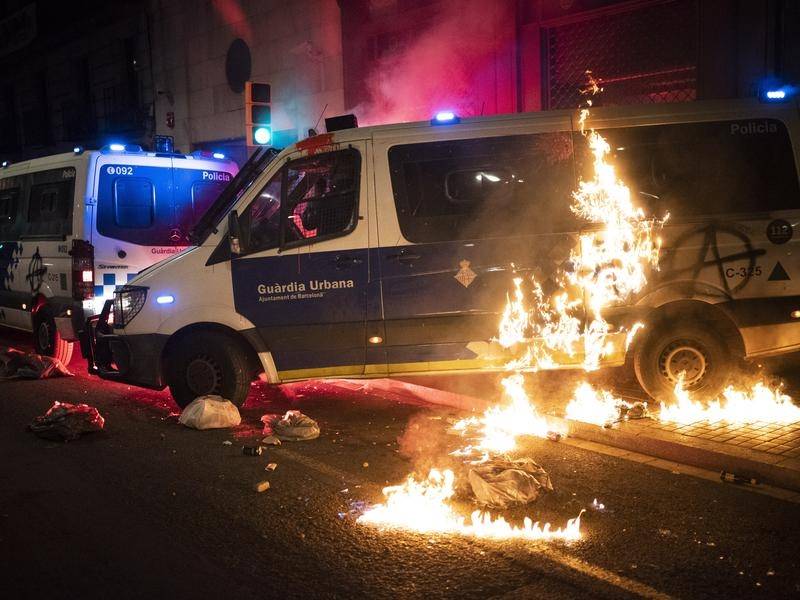 Protests in Spain over the jailing of a rapper have again turned violent.

After a brief respite, protests have again turned violent in Barcelona as supporters of a Spanish rap artist imprisoned for glorifying domestic terrorist grou...

After a brief respite, protests have again turned violent in Barcelona as supporters of a Spanish rap artist imprisoned for glorifying domestic terrorist groups and insulting Spain's monarch returned to the streets.

Several thousand people marched peacefully on Saturday in the city before small packs spun off and smashed the windows of at least two bank offices and did other property damage.

Police made at least 10 arrests, including of two people suspected of trying to set fire to a police van.

There were also protests in other towns in Spain's Catalonia region, where rapper Pablo Hasel was arrested on February 16 and taken into custody to serve a nine-month prison sentence.

Hasel is doing time for inciting terrorism - he has praised two now-defunct armed groups responsible for killing more than 1000 people in Spain - and for refusing to pay a fine for insulting Spain's former king.

Protests immediately erupted in cities across Spain following his arrest, but they continued for over a week in Barcelona and other parts of Catalonia. More than 100 people were arrested during that stretch.

The flare-up of violence on Saturday came after a few nights of tense calm.

Spain's left-wing government has pledged to eliminate prison terms for offences involving freedom of speech, but so far that has done little to quell the unrest.