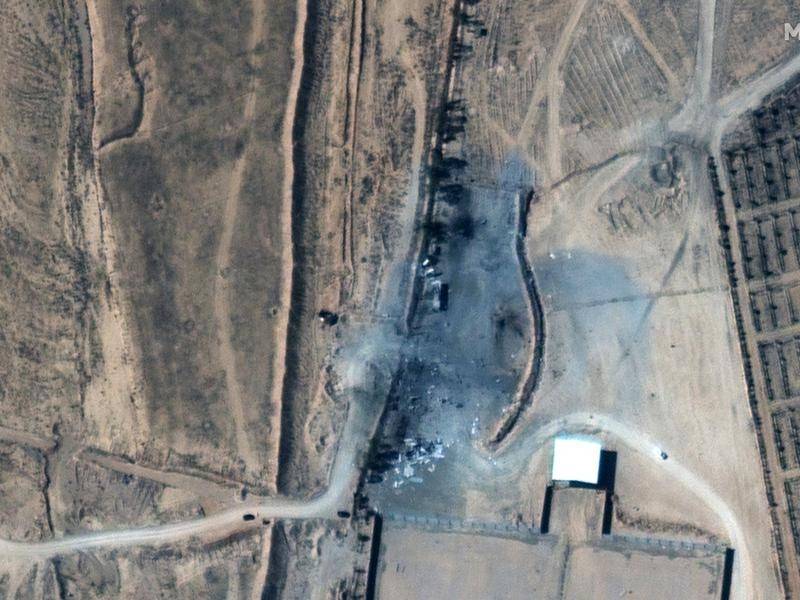 US president Joe Biden says Iran should view his decision to authorise air strikes in Syria as a warning that it can expect consequences over its support for...

US president Joe Biden says Iran should view his decision to authorise air strikes in Syria as a warning that it can expect consequences over its support for militia groups that threaten American interests or personnel in Iraq.

Mr Biden told reporters that the message he had intended to send with the strike on the Iran-backed Kataib Hezbollah militia group was: "You can't act with impunity. Be careful."

The Pentagon said the assault destroyed several buildings in eastern Syria, but were not intended to eradicate the militia groups that used them to facilitate attacks inside Iraq.

A war monitoring group said at least 22 people were killed.

Syria condemned the "cowardly" attack as a bad sign from the new US administration.

"Syria condemns in the strongest terms the cowardly US attack on areas in Deir al-Zor near the Syrian-Iraqi border," the Syrian Foreign Ministry said in a statement.

"It (the Biden administration) is supposed to stick to international legitimacy, not to the law of the jungle as (did) the previous administration."

US officials defended the air strikes as legal and appropriate, saying they took out facilities that housed valuable "capabilities" used by Iranian-backed militia groups to attack American and allied forces in Iraq.

He said the facilities, at "entry control points" on the border, had been used by militia groups the US deems responsible for recent attacks against American interests in Iraq.

In a political twist for the new Democratic administration, several leading congress members in Mr Biden's own party denounced the strikes, which were the first military actions he has authorised.

Democrats said the air strikes were carried out without authorisation from congress, while Republicans were more supportive.

Fellow Democrat Chris Murphy said legislators must hold the current administration to the same standards as any other, adding that retaliatory strikes are not necessary to prevent an imminent threat.

Senator Jim Inhofe of Oklahoma, the ranking Republican on the armed services committee, backed the decision as "the correct, proportionate response to protect American lives".

The targets were chosen to correspond to the recent attacks on facilities and to deter the risk of additional attacks over the coming weeks, she said.

Among the recent attacks cited was a February 15 rocket attack in northern Iraq that killed one civilian contractor and wounded a US service member and other coalition troops.

Mr Kirby said the facilities hit in the attack were near Boukamal, on the Syrian side of the Iraq border, along the Euphrates River.

"This location is known to facilitate Iranian-aligned militia group activity," he said.

He described the site as a "compound" that previously had been used by the so-called Islamic State group when it held sway in the area.