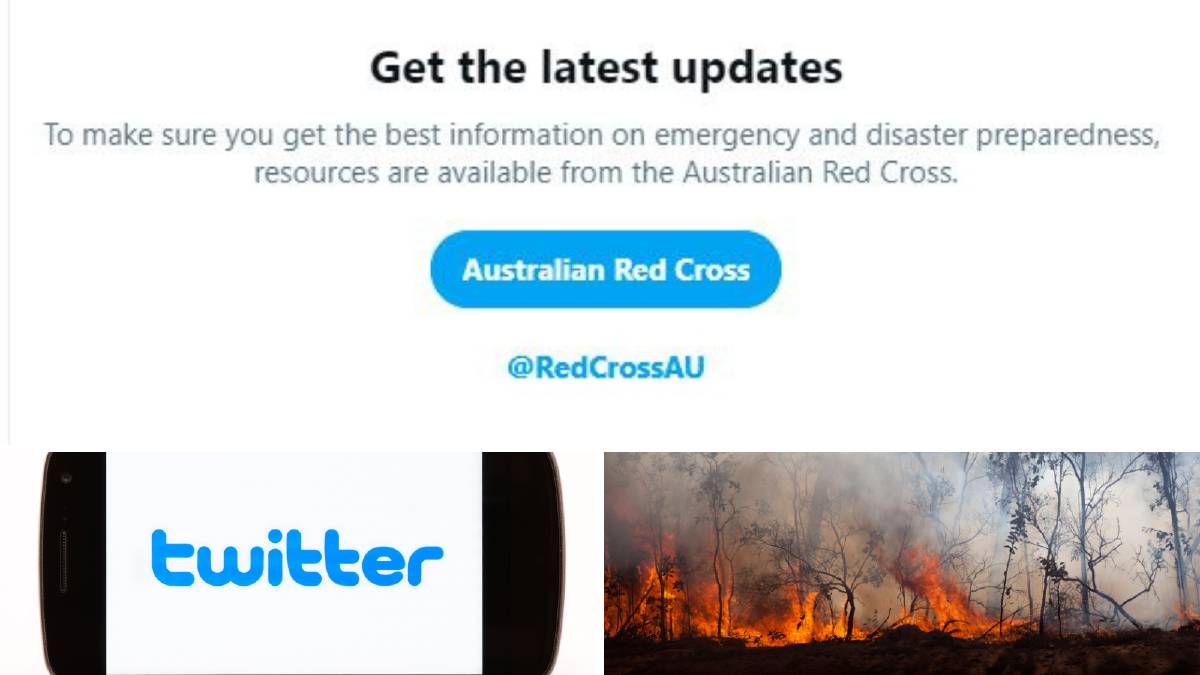 Looking to keep up-to-date in an emergency?

With The Bureau of Meteorology forecasting a severe heat wave and high bushfire danger across Australia ahead of the Australia Day long weekend - Twitter has highlighted its new partnership with Australian Red Cross to keep people informed in a disaster.

Twitter announced it is working with the Australian Red Cross on a natural disaster and emergency search prompt.

This means when someone in Australia searches for certain keywords on Twitter - such as bushfire, flooding, cyclone, and more - a prompt at the top of the search result will direct them to Australian Red Cross resources and the organisation's official Twitter account for up to date information.

“There were many, many campers in town, and holiday makers, people who really haven't prepared for fire or who haven't known about what to do in the event of a fire.”
Kate Arendsen
Red Cross Emergency Services volunteer, #Mallacootapic.twitter.com/Z1LmQDhlso

"In a flood, fire or cyclone, when you search on Twitter, you can now more easily find Red Cross updates to check your relatives are safe, or tips on getting prepared for example. Thanks Twitter for helping more Australians take steps to make themselves safer," he said.

Twitter said "when a crisis or natural disaster unfolds, people in Australia turn to Twitter to find out what's happening in real-time".

"During the 2019/20 bushfire season people used the service to connect in incredibly powerful ways. Communities united over mutual aid and fundraising efforts such as #AuthorsForFireys auctions and the 'Find a Bed' movement to find emergency accommodation for those displaced by the blazes."

Twitter was also used to access important information from government agencies, relief organisations, media, volunteers, and people across the community.

Here's a few tips to help find out what's happening in real time on Twitter during a crisis or emergency:

1. Follow trusted sources for breaking news and in-the-moment updates, such as @ABCemergency, @BOM_au, @RedCrossAU and local fire services. You can also follow our Emergency Response Lists on @TwitterAU and track events as they evolve with @MomentsAU, which shows curated Tweets from current topics so that you can discover what is unfolding on Twitter.

2. Use hashtags to find information about an emergency event. During a disaster, localised hashtags such as #QLDFloods or #NSWFires are often used to coordinate and streamline conversation. To ensure these hashtags remain useful, refrain from using them for unrelated topics.

3. Include ALT-text on your images and capitalise each word in your hashtags, to make Tweets accessible to more people, including those who are blind or low-vision.

4. Use Twitter Lite. In areas where telecommunications have been disrupted, Twitter Lite is a faster and more accessible service for people in rural and remote areas to communicate and get emergency updates. Once loaded, the information on Twitter Lite can be accessed offline as well. Twitter Lite is available at mobile.twitter.com in 42 languages.

5. If you need help or can offer help with relief efforts, @ mention or tag media, government agencies, or relief and volunteer organisations. They may be able to share your Tweet and amplify your voice.