There will also be no change to the incoming flight caps.

Australian authorities are scrambling to get on top of a new, more contagious mutation of the coronavirus, which moves faster than previous strains.

Prime Minister Scott Morrison announced the number of incoming international travellers would be temporarily halved in response to the new strain of COVID-19 coming out of the UK.

Brisbane will be plunged into a three-day lockdown from 6pm on Friday after a quarantine hotel cleaner tested positive to the virus.

Mr Morrison said the situation in Brisbane was "serious".

"Yes, we know there is only one case. But what we do know is that this new strain is some 70 per cent more transmissible than the previous strains of the virus," Mr Morrison said.

"This strain is likely to become, in the very near future, the dominant strain - as it largely already is in the UK. But we anticipate that this will become the more dominant strain of the virus globally.

"It moves so quickly - far more quickly than previous strains of the virus - and that means we need to give our contact tracers that head start to ensure that they can track down and run down all of the contacts from this individual and ensure that they can be identified, isolated, that people in the appropriate places can get the testing." 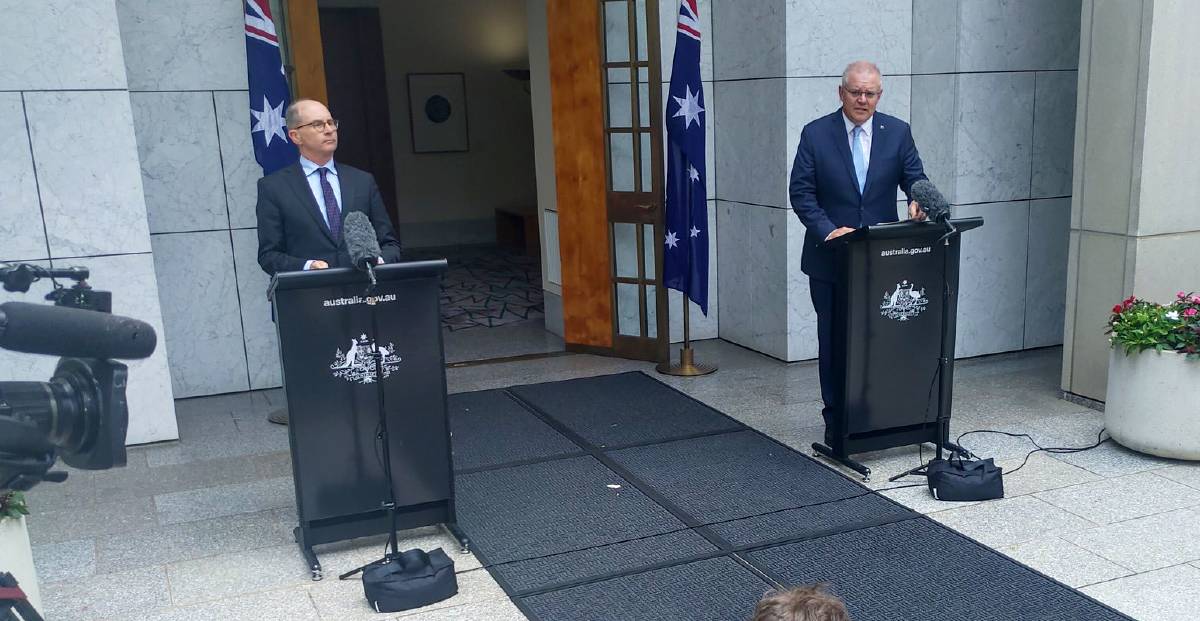 Chief Medical Officer Paul Kelly said the way Australia had fought the virus in the past would be less effective if this strain got a foothold in the country.

"Our main issue is to keep Australians safe and to really make sure that this particular strain is not the one that becomes circulating in Australia," Professor Kelly said.

"The reason is because it will be much more difficult to control. All of the things we've done in the past, all of those controls we've talked about in terms of test, trace, isolate - all of those personal measures, even some of the other measures we've had to do in certain times during this pandemic, will become less effective if this virus was to establish itself in Australia. So that's why we're going hard and fast and strong."

Under the new rules agreed to by national cabinet, inbound travellers to Australia must be tested for COVID-19 before getting on a plane.

National cabinet also agreed masks would be made mandatory on all domestic and international flights.

Professor Kelly admitted the testing was not fool proof, as an individual could later test positive, but it was a boost to Australia's "ring of containment".

All workers involved in the quarantine process, including cleaners, transport workers, medical staff and more, will now be subject to daily testing nationally.

They had previously been required to get tested once a week.

NSW will slash the number of international arrivals it will accept to 1505 per week.

In Western Australia, international arrivals will be reduced to 512, while in Queensland the number will fall to 500.

Mr Morrison announced no specific change to international arrivals for the ACT as he said the smaller airports were operating on bespoke arrangements that would be negotiated going forward.

The caps will be raised again on February 15.

"This is a temporary suspension of those higher levels of intake, as we learn more about what's happening here and what's going around the world," Mr Morrison said.

The AHPPC did consider stopping flights in response to the UK strain, Mr Morrison confirmed.

However, Mr Morrison said it was not feasible, or medically advisable, to shut Australia off from the world and ban all flights into the country.

Mr Morrison also said 80 per cent of Australians currently registered overseas were in countries where the UK coronavirus strain had been recorded.

Meanwhile the Greater Brisbane area has been declared a Commonwealth COVID-19 hotspot, while the ACT, Tasmania, and the Northern Territory will require people who've entered from Brisbane since January 2 to undergo 14 days of quarantine.

Western Australia has also brought back the hard border with Queensland.

Professor Kelly warned anyone who had been in the Greater Brisbane area since January 2 that they should assume the restrictions in Brisbane now applied to them. They should isolate, get tested and watch for any symptoms.

Professor Kelly said the three-day lockdown was not aimed at controlling the virus but about giving contact tracers a head start in discovering all possible contacts.

The story New rules for people flying to Australia, as numbers are cut first appeared on The Canberra Times.