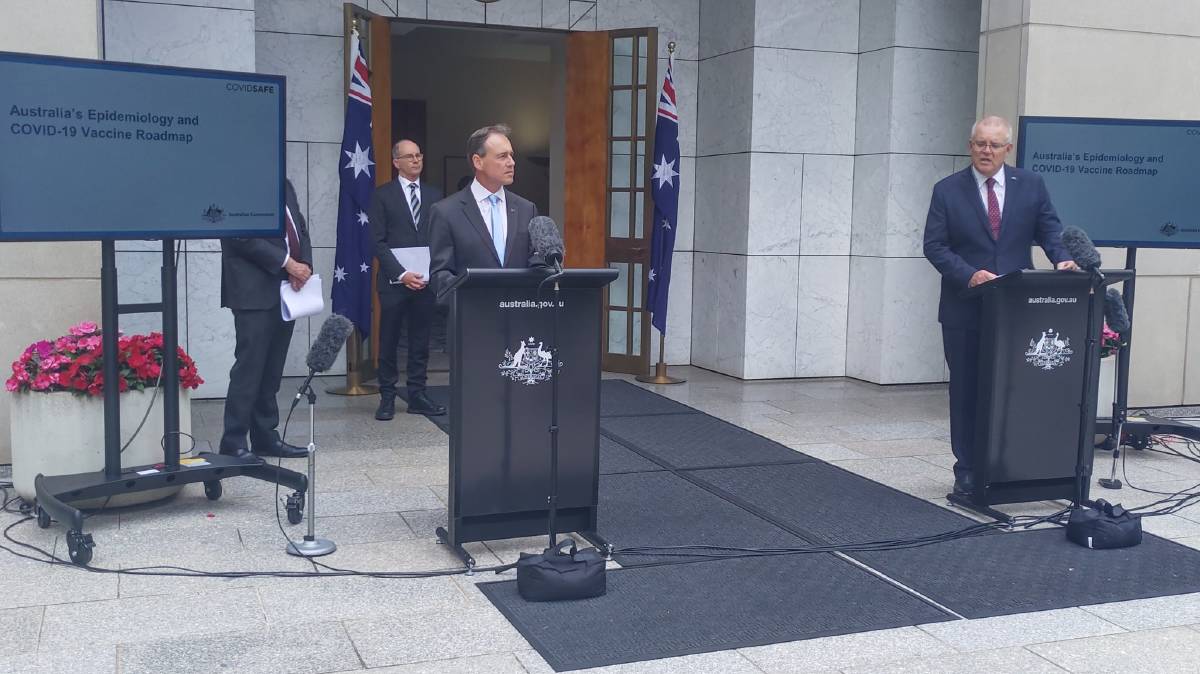 The Australian COVID-19 vaccine rollout is expected to begin in February with hopes 80,000 Australians a week will receive the shot.

Australia's COVID-19 vaccine rollout will begin as early next month, with plans to vaccinate four million Australians by the end of March.

Prime Minister Scott Morrison announced on Thursday the first vaccines in Australia would begin in mid to late February, pending approvals from the Therapeutic Goods Administration.

Quarantine and border workers, as well as frontline health staff will be the first in the nation to roll up their sleeves, with 1.4 million doses of the Pfizer to be delivered from up to 50 "hospital hubs" across Australia.

Aged care residents and workers will also be at the front of the queue, as will people with disabilities in care and the workers who look after them. 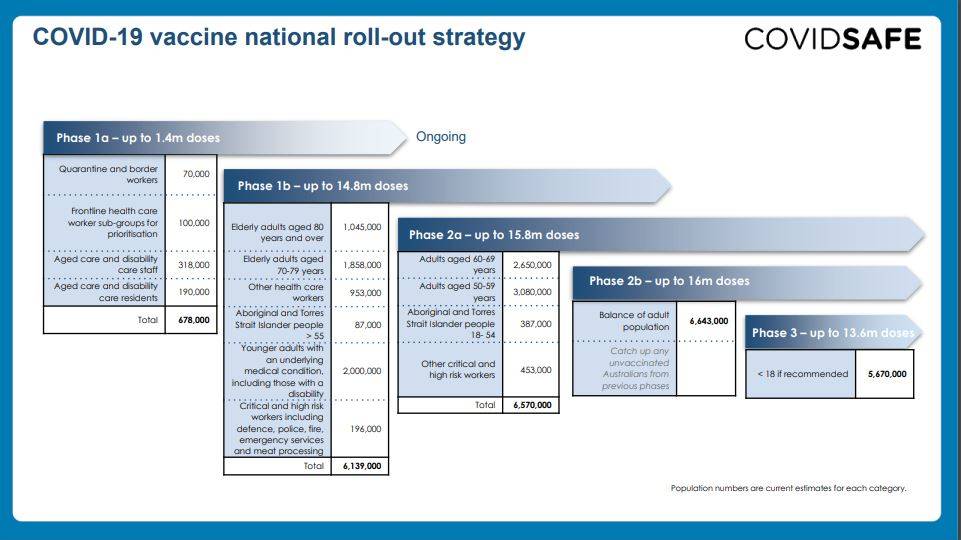 Who will get the first doses of the COVID-19 vaccine. Picture: Supplied

Australians aged over 70 years, Aboriginal people aged over 55 and "critical and high risk" workers will be in the second priority group and will receive the next 14.8 million doses. This includes Defence personnel, police officers and firefighters.

Aboriginal people aged 18 to 54, all other adults over 50 and other high risk workers will be in the third priority group, receiving the next 15.8 million doses.

Mr Morrison said about 80,000 doses would be delivered each week, building up to four million people vaccinated by the end of March.

Australians will receive a booster dose of the vaccine one month after the first jab. In the United Kingdom, residents have to wait three months for their second dose.

"Our officials have been moving swiftly and safely to introduce the vaccine here in Australia as soon as is safely possible," Mr Morrison said.

"It is moving considerably faster than normal vaccination approval processes would occur in Australia, but without skipping a step, without cutting a corner, ensuring that everything that needs to be ticked is ticked along the way."

The vaccine would be rolled out to the rest of the country towards the middle of the year, after those priority groups were vaccinated.

Health Department secretary Professor Brendan Murphy said about half of the country would be vaccinated as part of those three priority groups.

Children would be the last group to be vaccinated if the research determined it was safe and effective, according to Professor Murphy.

"None of us wanted to be a queue jumpers, but we also recognise the public confidence role and so we've come down on the side that the Prime Minister the health minister, maybe a few others [should get the vaccine]," Mr Hunt said.

However the cabinet as a whole would not be receiving vaccines early.

"We don't believe that we qualify on the public health grounds so it's very important we recognise that, but it does matter that we have public confidence and that's why we would look to do it with both the government and opposition leaders," Mr Hunt said.

The first doses are likely to be the Pfizer-manufactured vaccine once approved by the relevant bodies with the AstraZeneca expected to follow shortly after. Health Minister Greg Hunt said the Novavax vaccine would also be made available if required.

Professor Murphy said initial doses would be imported but local production would then be ramped up in order to deliver the vaccine to lower priority population groups.

While the Pfizer vaccines will continue to be rolled out from the hospital hubs as it must be stored at minus 70 degrees, the Astra Zeneca and Novavax vaccines will eventually be available through more than 1000 distribution points Australia-wide.

GP respiratory clinics will also provide the jab as will selected general practitioners.

Professor Murphy said Australians would be able to get the vaccine through their pharmacy later in the year.

But Mr Morrison warned the vaccine would not be a "silver bullet".

"Once the vaccination starts. COVID safe practices, do not end, they continue," Mr Morrison said.

"It will still be a fight over the course of 2021, but [the vaccine] will add a very, very significant defence and offence ... in combating the virus here in Australia and around the world."

It is the second time this week the Morrison government revised its timeline for the vaccine rollout.

On Wednesday, Mr Hunt announced the first jabs would be brought forward from late to early March for priority groups.

But Mr Albanese said on Wednesday the vaccine should begin to be distributed as soon as it was approved by the TGA.

However Mr Morrison said the vaccine would only arrive in Australia two weeks after it received approval from the TGA.

It would then undergo a week of batch testing before it could be more widely distributed.

Professor Murphy said health officials would not be wasting this time.

"We are doing 24-hour-a-day preparation with the states and territories on the most complex logistical exercise that perhaps we've done in public health in this country," Professor Murphy said.

Here’s a better view of the first groups in Australia who will get a coronavirus vaccine @canberratimespic.twitter.com/0PlM5x4KGW