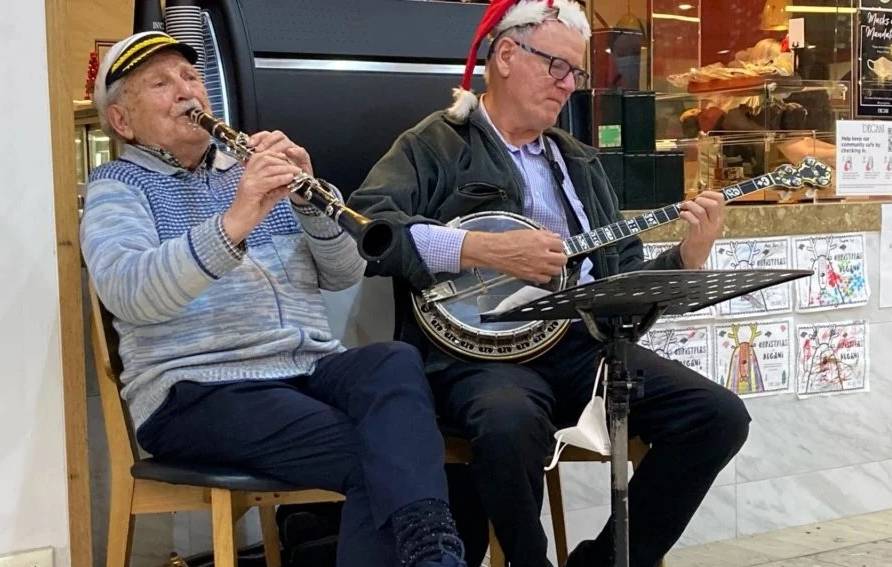 Legendary jazz clarinetist Nick Polites, 93, popped up from retirement to give a rare public performance outside Degani Cafe in Ivanhoe Mall on Christmas Eve.

The veteran was accompanied by banjo man Tony Orr, who now plays in Nick's old band, The Louisiana Shakers, for which he played for decades.

The event came about when Degani proprietor Peter Katsaitis heard Nick performing outdoors some years ago. He was out walking and followed the sound of the music until he found Nick.

They formed a bond once they realised that Peter was from Lefkada, the same small Greek island as Nick's father.

As a teenager, Nick's dad left Lefkada in 1898 and made his way to South Africa where, on the advice of Australian soldiers fighting in the Boer War, he sailed on to Australia in the early 1900s.

Nick was born in Melbourne in 1927. His first conscious exposure to music came at the of age 11, when a footy mate loaned him Louis Armstrong's Hot Five and Hot Seven recordings.

Hearing recordings like West End Blues for the first time was an epiphany. Nick has devoted himself to jazz ever since.

Entirely self-taught on the clarinet, he started his performing and recording career in 1951 with Frank Johnson's Dixielanders.

Nick's career has taken him to many places around the world. He has toured Europe extensively and was a regular performer in New Orleans from the early 1960s.

During his time in "The Big Easy", he was embraced by the jazz community, performed at famous venues such as Preservation Hall in the French Quarter, and befriended, performed with and stood in for his hero clarinettist, George Lewis.

In 1954, Nick was in the entourage that greeted Armstrong when he came to Melbourne in 1954. Invited to a welcome party at the Polites family home, the big man invited Nick to played with his All Stars band.

Until his retirement, Nick was a fixture on the jazz scene, . Such is his love of the the genre that he donated 30 albums of memorabilia, photographs, recordings and videos to the Australian Jazz Museum in Wantirna.

Nick made the recent appearance to help celebrate the reopening of the Degani after its complete renovation earlier in the year.

In recent times, Nick has generously donated thirty albums of memorabilia, many photographs, recordings and videos to the Australian Jazz Museum, which is working through this wealth of material to ensure it is carefully preserved for posterity.

The Louisiana Shakers (with Tony on banjo) resume regular Sunday afternoon performances at the Clyde Hotel in Elgin Street, Carlton on January 31.