The holidays are almost here. It's the perfect time to catch up on streaming shows you might have missed.

NEVER have people watched so much TV. When COVID-19 confined us to our homes, many naturally reached for the remote.

We binged on bizarre real-life characters like Joe Exotic and Carole Baskin or indulged in '90s nostalgia with Michael Jordan and his Chicago Bulls. Later as the financial and social impact of COVID deepened, we sought escapism in Russian empresses, chess grand masters and cute Baby Yoda.

Here's a collection of 2020 shows worth revisiting over the summer.

The Queen's Gambit (Netflix): Who could have imagined chess would make such compelling viewing?

This seven-part mini-series has been in Netflix's top-five most-watched shows in Australia since it debuted in October and deservedly so. It's a richly-engrossing production complete with stunning '60s set designs and costumes, but the real drawcard is the performances, especially from leading actress Anya Taylor-Joy as Beth Harmon.

Harmon is an orphan girl who possesses a genius for chess. However, she is also weighed down by substance demons which eventually threaten to derail her life and career as a grand master. The seven episodes tell the story of Brown and his motley crew who waged a guerilla warfare against the southern slave traders prior to the American Civil War. What it lacks in historical accuracy, is balanced out with grandeur and biting black humour.

The Undoing (Binge): Nicole Kidman re-invented herself as a TV star with her performance in the acclaimed Big Little Liars. The Undoing, which also stars Englishman Hugh Grant, is equally compelling.

Grace (Kidman) and Jonathan Frazer (Hugh) are a wealthy and successful New York couple, whose son attends an elite private school. When a young mother of a student from the school is found brutally murdered it reveals dark truths about the Frazer's marriage and family. This psychological thriller has twists a plenty. HILARIOUS: Elle Fanning is brilliant as Catherine in the comedy-drama The Great, directed by Australian Tony McNamara.

The Great (Stan): Australian writer-director Tony McNamara (Puberty Blues, The Secret Life Of Us) struck gold with his hilarious reimaging of the story of 18th century Russian empress Catherine The Great.

With it's R-rated talk of sex and C-bombs, this is anything but your typically stale period piece. Rather it's a devilishly funny romp, backed by an imaginative script that explores Catherine's (Elle Fanning) plans to overthrown her daft and insecure husband, Peter III of Russia, played superbly by Nicholas Hoult (Tolkien, Skins). I Hate Suzie (Stan): Billie Piper made a serious reinvention as the emotionally unstable Suzie Pickles, who was once a teenage music star before struggling for relevancy as a middle-aged wife and mother.

Suzie is seemingly on the cusp of a career comeback after landing a Disney film role, but it becomes threatened when a sex tape of her and another man goes viral online. As Suzie's marriage falls apart, her life unravels with comically messy consequences.

Adrian and Dom: 2020 (Stan): The Bondi Hipsters only released their COVID-19 mockumentary last week, but it was among the funniest shows in 2020. Mainly because it's so topical by parodying celebrities who turned to social media during lockdown to remain relevant.

At just 32 minutes, this one-off special is perfect for summer viewing in between pool swims or breaks in the cricket. 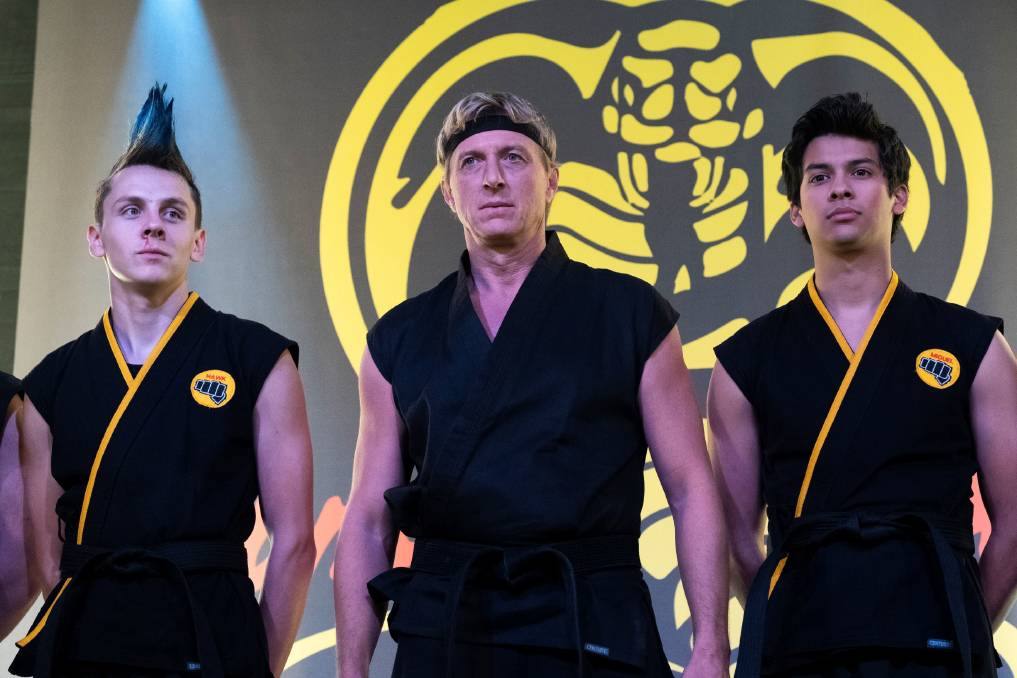 WILD FUN: Cobra Kai appeals to fans of The Karate Kid and a younger audience.

Cobra Kai (Netflix): This spin-off from the classic 1984 film The Karate Kid could easily have been a lame duck. Instead it provided one of the most enjoyable binge-watching experiences of 2020.

What made Cobra Kai such a surprise hit was the twisting of the main characters from the original. It's set 34 years after Daniel LaRusso's famous crane kick won him the All-Valley Karate Tournament, and his former tormentor, Johnny Lawrence, has fallen on hard times. Johnny finds a purpose in training his bullied neighbour Miguel Diaz and sets about reviving the infamous Cobra Kai dojo, which brings him back into conflict with the now successful LaRusso.

You'll enjoy the nostalgia and the karate fights are furious, especially the climax of series two. 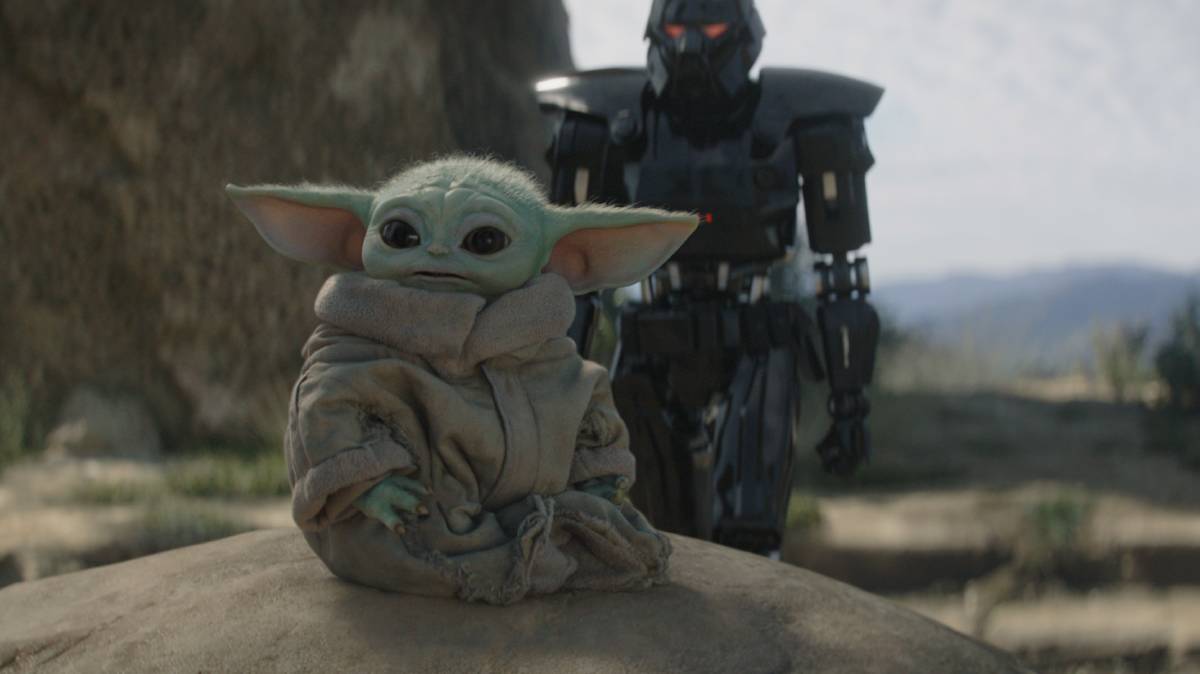 CUTE: Baby Yoda in The Mandalorian.

The Mandalorian (Disney+): Star Wars buffs were divided over Disney's latest film trilogy, but the affection for The Mandalorian have been almost universal.

Season one last year left our chrome-domed babysitter "Mando" still travelling around the galaxy to deliver The Child or "Baby Yoda" to his home. Season two amps up the colourful aliens and dramatic intergalactic dogfights.

The plot can be annoyingly slow, but there's enough cool Stars Wars-style battles and references to keep you entertained.

Raised By Wolves (Binge): Ridley Scott's dystopian sci-fi series was arguably the most elaborate TV show released in 2020. The sparse and desolate panorama of the distant planet of Kepler-22b gave the series an eerie and foreboding tone it never shook.

The story follows a couple of androids who have been sent from a dying Earth to foster human embryos and raise them as atheists. However, they soon come into conflict with a group of religious humans who have landed on their planet. It's a new take on the ages old conflict of faith versus science. NOT SO CUDDLY: Joe Exotic in Tiger King.

Tiger King (Netflix): If there was one show that's come to symbolise the weirdness of 2020 it's Tiger King. Partly due to its good fortune of being released as the world snapped into lockdown, and partly because of its ridiculous characters and unbelievable storyline, everyone seemingly watched Tiger King.

It follows gay hillbilly zoo operator Joe Exotic, whose Oklahoma park houses one of the largest collections of big cats in the world. The series begins as an exploration of Exotic's bizarre lifestyle before his bitter feud with the equally-strange Carole Baskin, an animal rights activist, morphs the show into a gripping true crime doco.

Class Action Park (Binge): It's frightening that Action Park actually existed. This doco explores the New Jersey amusement park which operated from 1978 and 1996 and was the "world's largest water park".

It was also among the most dangerous. Five people were killed at the park and teenagers suffered injuries daily on the madcap rides designed by unqualified engineers. At times you'll laugh at the craziness of the rides, and you'll also cry at the unnecessary human cost.

The Test (Amazon Prime): Michael Jordan's The Last Dance was the most watched sports doco of the year, but The Test was the most revealing. The series follows the Australian cricket team after the sandpaper scandal that led to the suspensions of ex-captain Steve Smith and David Warner.

The Test is a fly-on-the-wall look at all the insecurities and tensions of a cricket dressing room as new coach and captain Justin Langer and Tim Paine attempt to restore the Baggy Green. An absolute must for cricket fans.

The story Our guide to the best summer holiday TV bingeing first appeared on Newcastle Herald.