2020 has been one of the most extraordinary years of our lives. Here's how it unfolded. 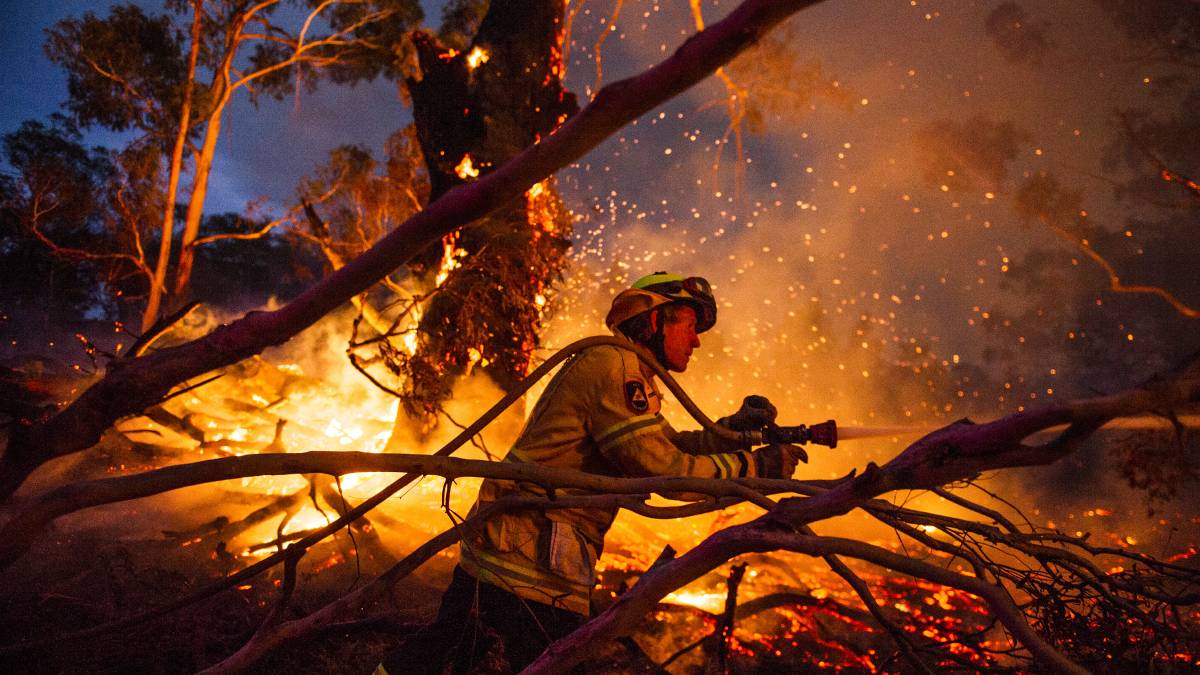 Firefighters work to put out fires at the edge of the NSW North Black Range bushfire in January. Picture: Dion Georgopoulos

January normally starts with a bang - but in 2020, that didn't mean fireworks. The year began in a haze of smoke, as fire tore through south-eastern Australia.

The skies turned red and people fled to beaches on New Year's Eve as fire ripped through the NSW South Coast. In Mallacoota in Victoria, about 4000 people were trapped on the beach as they tried to escape the blaze. Cut off from all roads, the navy was sent in to evacuate them.

Prime Minister Scott Morrison was heckled in the NSW town of Cobargo, where Patrick and Robert Salway died trying to save their home. A pregnant woman refused to shake his hand. 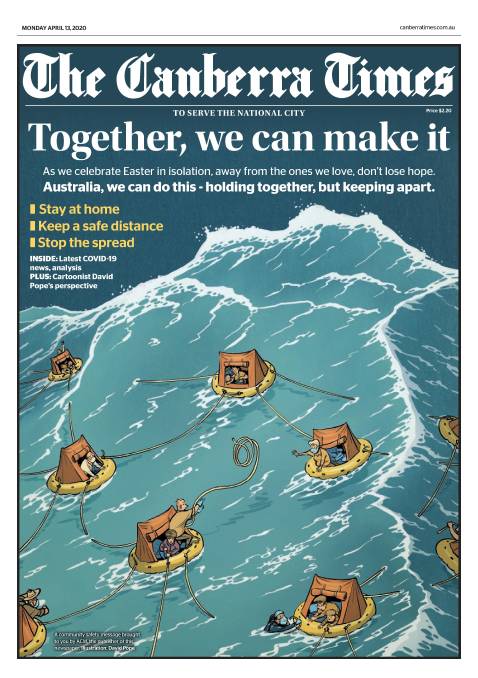 +135
How The Canberra Times covered this unprecedented year.

Under pressure after an ill-timed holiday to Hawaii as the country burned in December, Morrison made the unprecedented decision to call-out 3000 army reservists to help with the firefighting effort across four states. NSW Rural Fire Service Commissioner Shane Fitzsimmons was not told the army was being called in.

Deputy Nationals leader Bridget McKenzie was the target of a scathing Auditor-General report, which found the former sport minister's office ignored advice from Sport Australia and awarded community sporting grants to clubs in marginal seats in the lead-up to the 2019 election.

DFAT issued a travel warning for Wuhan and Hubei provinces in China on January 24. The first Australian case is confirmed on January 25. On January 29, Morrison announced a mercy flight to evacuate hundreds of Australians from the epicentre. Christmas Island is used as a quarantine facility. Australia closes its borders to mainland China. Australians trapped in the epicentre of the breakout plead for government assistance to get out of the locked-down city of Wuhan.

Embattled deputy Nationals leader Bridget McKenzie resigned from the frontbench after it is revealed she was a member of a gun club that received a sports grant. An investigation from Prime Minister and Cabinet secretary Phil Gaetjens controversially clears her of pork barrelling. 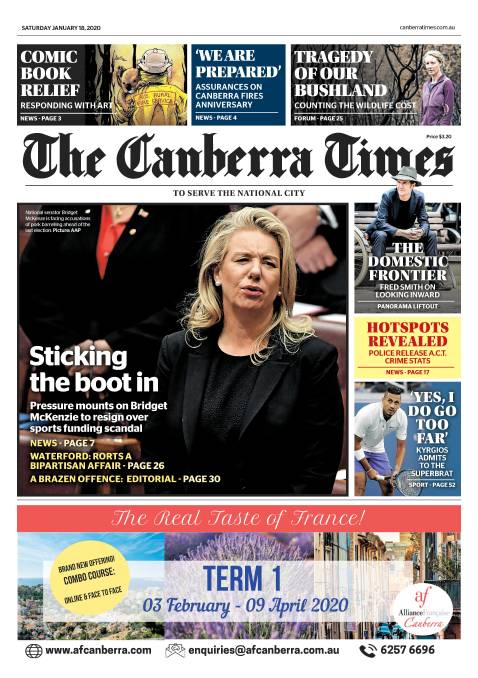 A week of heavy rain helps fire crews contain the hundreds of fires burning around the country. More than 2400 homes have been lost. Governor-General David Hurley issues the letters patent for the bushfires royal commission.

The nation reels with horror after Queensland mother Hannah Clarke and her three children are murdered by her husband Rowan Baxter, who doused the family in petrol and set them alight before killing himself.

Prime Minister Scott Morrison activates Australia's pandemic plan as the novel coronavirus spreads to 42 countries. Travel is now blocked from China and Iran, where cases are spiralling. About 150 Australians are trapped on the Diamond Princess cruise ship off the coast of Japan after a COVID-19 outbreak on board. 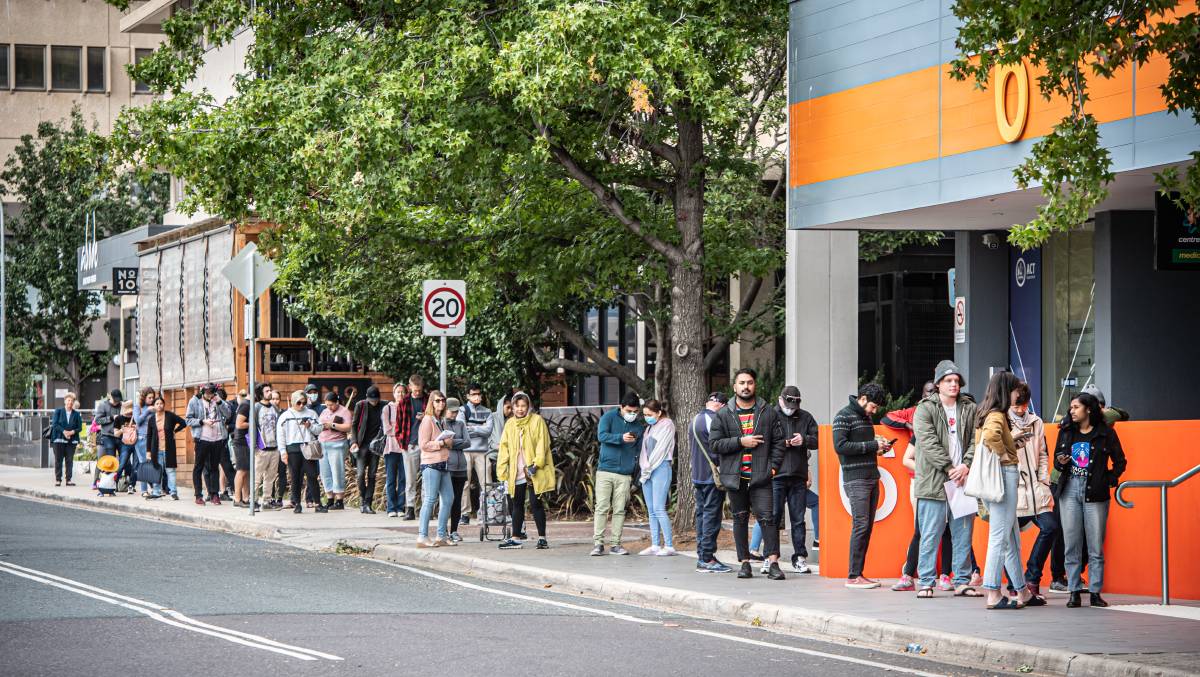 An elderly Perth man becomes the first person in Australia to die from the coronavirus after being evacuated from the Diamond Princess cruise ship. Cases begin to rise daily across the nation.

Across the world, lockdowns begin. International borders start closing as well, but it's too late. Deaths soar in Italy and Spain.

Prime Minister Scott Morrison announces gatherings of more than 500 people must be cancelled and Australians are told not to travel overseas unless urgent. However Morrison said he still planned to go to the football over the weekend. Hours later he reneges on this. 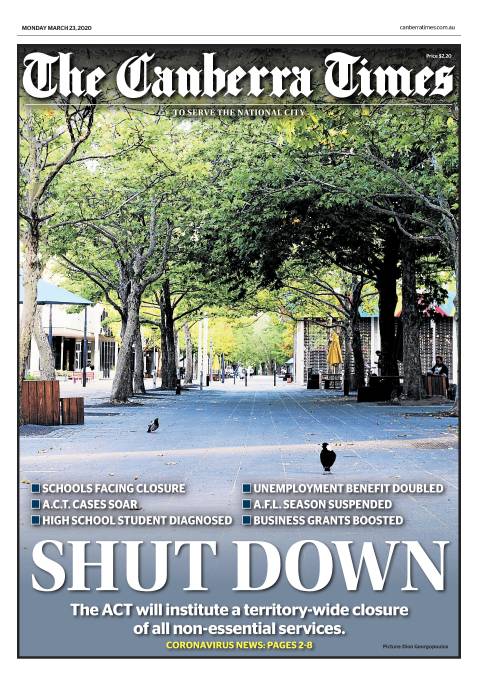 Home Affairs Minister Peter Dutton is hospitalised after testing positive for COVID-19. US actor Tom Hanks is already in isolation in a Queensland hospital after he and his wife contracted the virus.

Australia announces it will close its borders to all non-citizens and non-residents. Australians are warned to get home as soon as possible.

Meanwhile passengers on the Ruby Princess cruise ship develop flu-like symptoms. The ship returns to Sydney Harbour and all 2700 passengers are allowed to disembark. Days later, passengers start testing positive for COVID-19. One of the first people to test positive - a woman in her 70s - dies in a Sydney hospital.

The new national cabinet meets and decides to enact sweeping closures of pubs, clubs, cafes, gyms and other venues across the country in order to flatten the curve. Massive queues form outside Centrelink as laid-off workers attempt to apply for the JobSeeker payment, which has been boosted by the $550-per-fortnight coronavirus supplement. Government Services Minister Stuart Robert blames the downed MyGov website on a cyber attack. He later backtracks, saying the website was overloaded by the number of people attempting to log on. The $130 billion JobKeeper wage subsidy is announced. 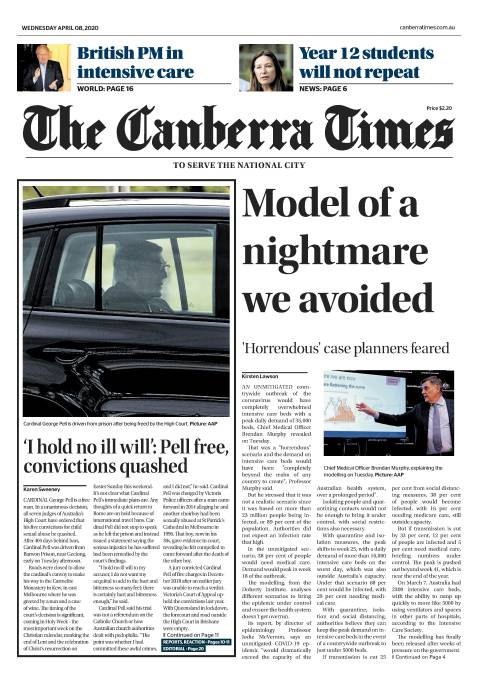 Former prime minister Malcolm Turnbull releases a scorching book, in which he blames Scott Morrison for damaging leaks that undermined his leadership. His publisher Hardie Grant threatens to go to police after Liberal staffers shared pirated copies of the book with The Australian. The leak is traced to a staffer in Morrison's office and an out-of-court settlement is reached.

Labor MP Mike Kelly steps down for health reasons, sparking the Eden-Monaro byelection. He comes under fire for immediately starting a new job with a defence company. 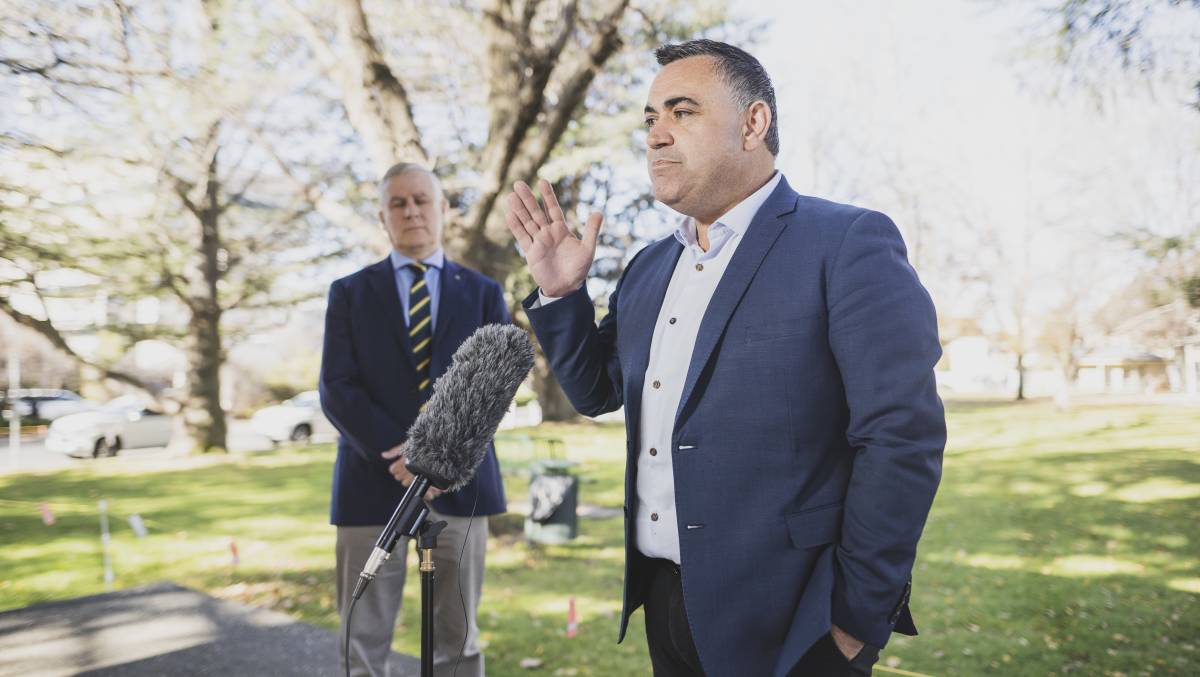 Australian Bureau of Statistics figures reveal 600,000 jobs were lost in April due to the coronavirus pandemic, bringing the unemployment rate to 6.2 per cent. However the bureau says the figure would have been 11 per cent without the JobKeeper program. More than 2.7 million workers lost work or hours due to the virus. However an accounting error means the total estimated cost of the JobKeeper scheme is revised down from $130 billion to $70 billion.

NSW Deputy Premier John Barilaro unleashes an extraordinary attack on Deputy Prime Minister Michael McCormack, after McCormack allegedly failed to support Barilaro's bid to run in the byelection for the federal seat of Eden-Monaro. NSW Liberals MP Andrew Constance announces then withdraws his candidacy for the seat after a blow-up with Barilaro.

The Morrison government announces it will pay back 470,000 unlawful Centrelink debts collected under the robodebt scheme. 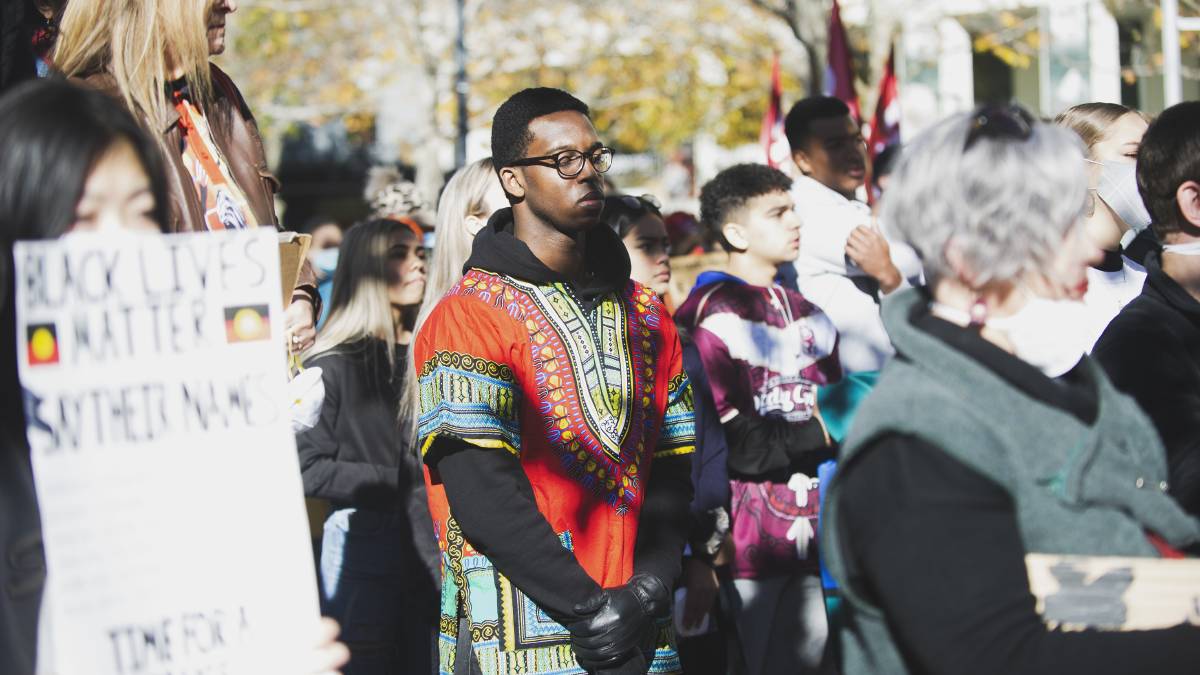 Racial tensions boil over in the United States after George Floyd's death in custody. Anger seeps into Australia, with thousands defying coronavirus lockdown orders in cities across the country to protest the treatment of Indigenous Australians by the judicial system. A number of public housing towers in Melbourne are locked down as coronavirus cases continue to climb. Victorian Premier Daniel Andrews forces the city into a stage three lockdown as states begin to close their borders to Victorians.

After a long-running court battle, the so-called Palace Letters between then governor-general Sir John Kerr and the Queen about the 1975 dismissal of prime minister Gough Whitlam are released. The letters show Kerr dismissed the prime minister without informing the Queen, although he had canvassed the use of his reserve powers with the Queen's private secretary Sir Martin Charteris over several months. Canberrans who were stranded at the NSW-Victorian border arrive home. Picture: Elesa Kurtz

The border wars between state and territory leaders begin. Queensland abruptly shuts its border to NSW and the ACT, after a man from a Sydney COVID-19 hotspot entered Queensland via the ACT.

A group of Canberrans are stranded at the NSW-Victoria border after NSW made a late-night change to its health advice. After days of negotiations, they are finally allowed to drive home subject to strict rules. 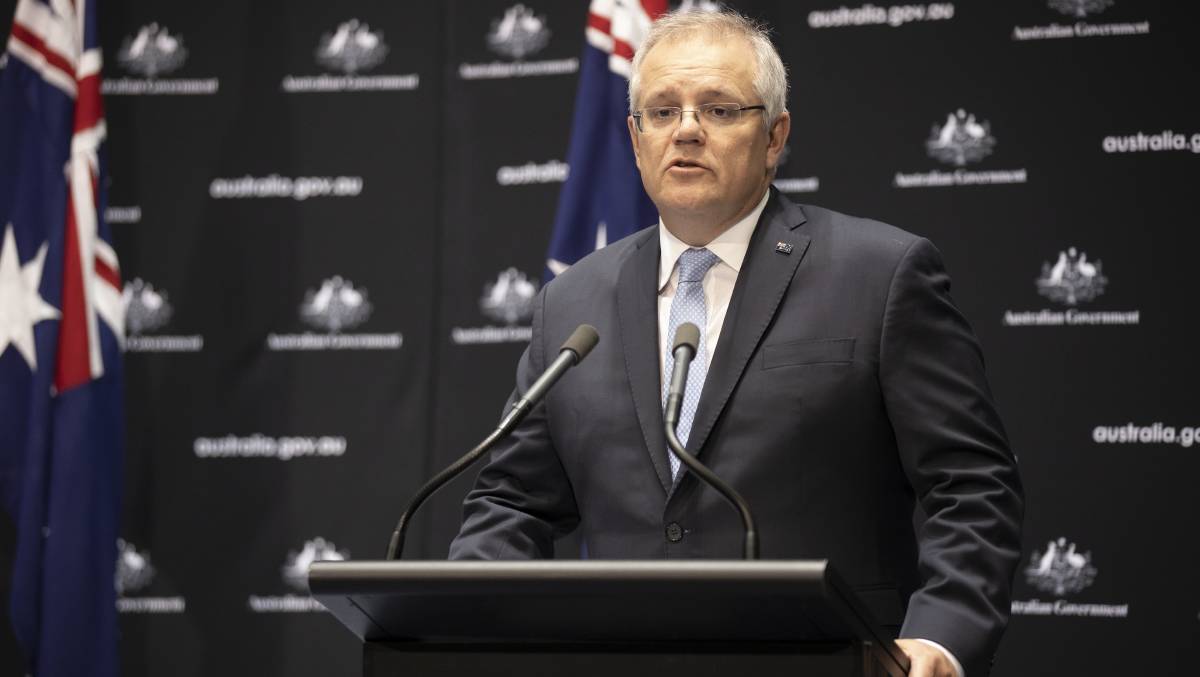 Australia officially dives into recession, after suffering the worst economic slump since the Great Depression.

Prime Minister Scott Morrison attempts to get national cabinet to agree to a shared definition of what constitutes a coronavirus hotspot in order to "make Australia whole again by Christmas this year". Western Australia does not agree to the definition. 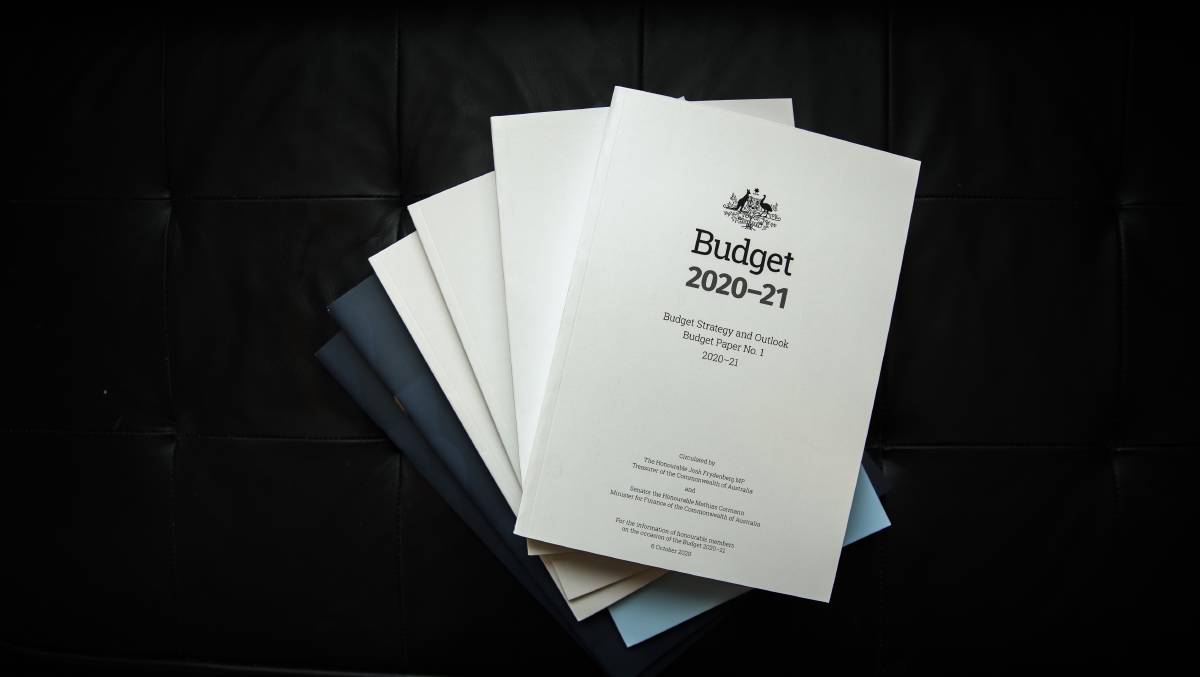 The federal budget was finally handed down in October, after being postponed due to COVID-19. Picture: Sitthixay Ditthavong

It is revealed there are 26,000 Australians registered with DFAT overseas who are attempting to get home but can't due to the caps on quarantine places managed by the states.

Morrison promised those people would be able to get back to Australia for Christmas.

The JobKeeper and JobSeeker schemes are tapered back, as the jobs market starts to recover.

It is revealed NSW Premier Gladys Berejiklian was in a "close, personal relationship" for five years with disgraced Wagga MP Daryl Maguire, who was forced to quit parliament in 2018 for helping to broker deals for property developers. The Premier, after giving evidence to ICAC, said the secret relationship was a failure in her personal life. 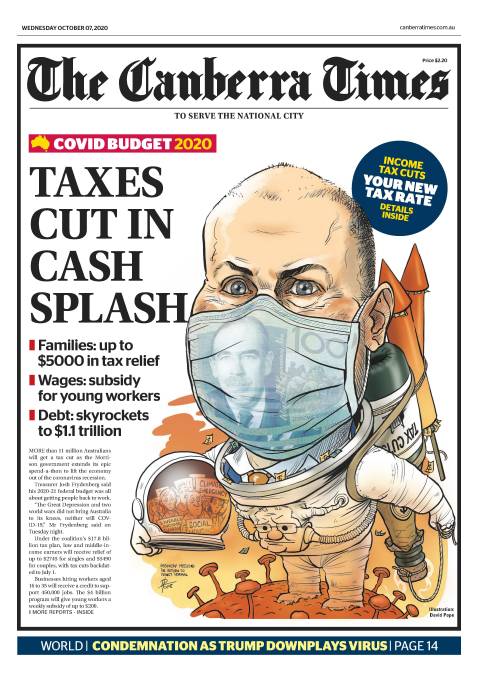 Australia Post chief Christine Holgate is forced to step down after it was revealed the company spent $12,000 on Cartier watches to reward senior executives. A day later, the chair of the corporate regulator ASIC, James Shipton, was forced to stand aside due to anther expenses scandal.

Senate estimates also heard Australian taxpayers may have been defrauded when the infrastructure department paid $30 million for land worth $3 million near the Western Sydney Airport.

The federal budget is finally handed down, after being postponed in May due to COVID-19. Around $17.8 billion in tax cuts are announced while gross debt climbs to $1.1 trillion. The JobMaker hiring credit is also introduced.

Joe Biden sweeps to power in the US election, although Donald Trump refuses to concede.

A Four Corners expose reveals Coalition minister Alan Tudge had an affair with a staffer, who was later pushed out of her job. Attorney-General Christian Porter is also accused of inappropriate conduct. Porter threatens to sue the ABC over the report. 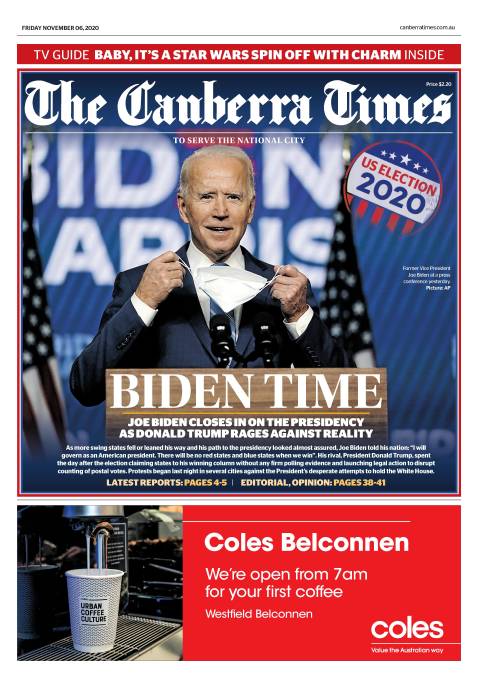 The Morrison government agrees to a landmark $1.2 billion payout to nearly half a million Australians affected by robodebt. It is expected to be the largest class action payment in the Australian history once approved by the Federal Court.

The findings of a long-running inquiry into possible war crimes in Afghanistan send shockwaves through Australia. The Brereton report finds credible evidence Australian special forces troops murdered 39 Afghans and covered up the crimes. Chief of the Defence Force General Angus Campbell announces the meritorious unit citation for the special operations task group who served in Afghanistan between 2007 and 2013 will be revoked, although Prime Minister Scott Morrison later says no decisions had been made. 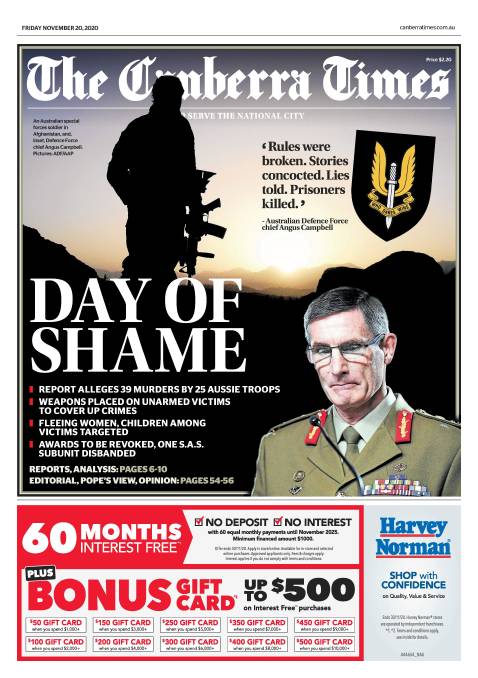 Hopes of a homegrown vaccine are dashed when clinical trials of the University of Queensland-CSL COVID-19 jab are abandoned due to participants returning false positives for HIV.

With borders reopened, Treasurer Josh Frydenberg announces a much-improved bottom line for Australia in the mid-year budget update. Unemployment was now expected to peak at 7.5 per cent in March, down from the 8 per cent forecast in October and lower than Treasury's initial predictions of 15 per cent.

But the budget assumptions are blown out of the water days later, as states start introducing travel restrictions in response to the rapidly growing virus cluster on Sydney's northern beaches.

2020 appears poised to end how it began: with uncertainty, fear and division.

But hard lessons have been learnt in this most extraordinary year.

We've endured fires, floods and a pandemic, and Australia is well placed to deal with whatever 2021 throws our way.

After all, how much worse could it be?

The story How one of the most extraordinary years of our lives unfolded first appeared on The Canberra Times.