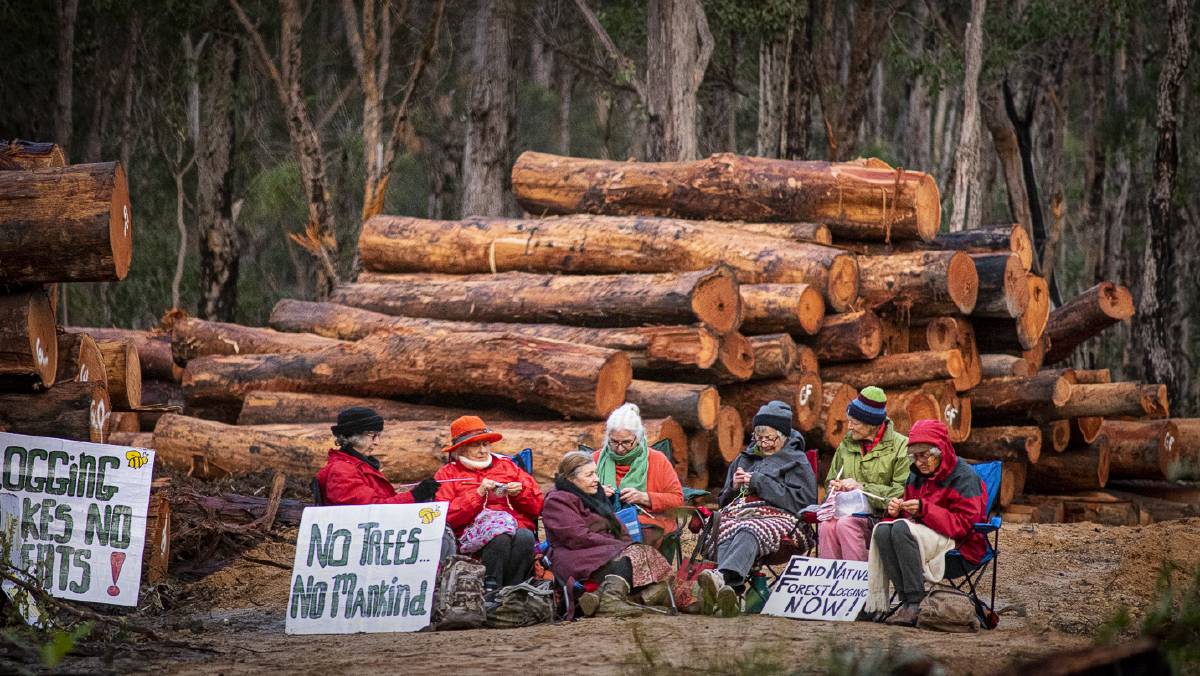 They've been dubbed "The Magnificent Seven" - seven grandmas, frustrated by the continued logging of native forests, who set up a blockade in McCorkhill Forest near Nannup.

On September 8, they woke at 3.30am and wrapped up warm. Then the knitting nannas offered tea and muffins to police and forestry workers.

"It wasn't as frightening as we thought it would be, but the machines were very frightening," nanna Peta Goodwin said.

"The WA Forest Products Commission officials and the police were very civil and we gave them what has become our Nannafesto."

The Nannafesto calls for the WA government to immediately protect all native forests for climate and biodiversity and complete the transition of the timber industry to plantations and farm forestry.

"The police were a bit bemused as they were used to dealing with protesters who are much younger," Peta said.

"One of the policemen was shocked there were three grandmothers in their eighties there."

Eventually the seven returned to their cars.

"We walked through exquisite jarrah forest; the light was dawning and it was so pretty," Peta said.

"Within three days it was gone. It was heartbreaking; it was slaughter."

Then more nannas rallied to the cause. Calling themselves Nannas for Native Forests, on September 29 more than 40 of them created a blockade to stop logging in Helms Forest between Nannup and Margaret River.

"At the second blockade we had a couple of women over 90 join us and I think we have nearly 1000 people following us on Facebook now," Peta said.

She said 85 per cent of the logged wood is being used as charcoal, wood chip and firewood. "It's not even being sold as timber. The forests are worth far more to us standing."

On November 24 the nannas hired two buses and 40 of them left at dawn to travel to Dumas House in Perth where they were greeted by around 300 supporters for a mass morning tea.

Peta was one of five nannas who met with Forestry Minister Dave Kelly who said while he appreciated the passion the nannas have shown, the McGowan government was proud of its record in managing WA's native forests.

"It was the Gallop Labor government that ended the logging of old-growth forests, and the McGowan government has continued that ban," he said.

When the process to prepare the next Forest Management Plan began in 2021, he said contributions from all stakeholders, including the nannas, would be invited.

Mr Kelly said the plan strives to provide a policy framework that balances between conservation and other activities, including native forest timber harvesting, honey production, tourism and recreation.

For the nannas, the wait for the planned review, effective in 2023, is too long. They say the rates of extinction (of both flora and fauna) have skyrocketed and there is little time left to make real change.

"We need to stop chopping down these forests now and there is no good reason why we can't," Peta said.

"People that come to the south-west see a buffer. They see a lot of trees and think the forests are beautiful, but behind that buffer is devastation.

"Unless you drive into the forest and get out of your car, you will not see it because it is well hidden."

The nannas hope to inspire grandmothers everywhere to take up the cause.

"We need bodies out there, we need voices," Peta said.

"The elders getting out there and speaking for the community is very powerful. We have a powerful voice but we need to use it.

"We need to use it because our children and grandchildren haven't the time to do it, and we have."