WITH a combined age of 364 these six running legends have completed nearly 1000 marathons between them.

Despite the majority of running events being put on hold this year, due to the COVID-19 pandemic, it didn't stop these determined masters athletes, aged from 52 to 71, crossing the finish line at the special Sydney Tribute Marathon in Kensington on Wednesday. For the oldest legend, Ray 'Eagle' James, 71, from Balmain it was his 334th marathon, which he finished in a time of 05:28:27. He said he, along with his fellow legends, was delighted the organisers had planned something special for them this year.

"Running is a great pastime and while I enjoy running solo, marathon running for me is about taking part alongside other enthusiasts like the legends. A marathon takes a long time to complete, so you need the camaraderie of other runners to keep your spirits up and to get you to the finish line. And I can't wait to get back to the real thing in 2021 and enjoy probably the most beautiful marathon in the world."

His advice to others starting out on their marathon journey was "to take each day as it comes, run regularly and the improvements will certainly come".

For 60-year-old Rick Patzold, who took out the title, it was a landmark moment as he completed his 300th marathon.

Mr Patzold, from Albion Park, said he was delighted with his time of 03:22:33. "Today was my 300th marathon and the quickest in the 80 I have completed in the last three and a half years," he said.

It was 68-year-old Eric Schmierer's 86th marathon. He said he has missed participating this year. "The Sydney Running Festival brings communities together and provides great camaraderie for all runners. It's so well organised and I have missed my fix of the Harbour Bridge and Sydney scenery," he said. 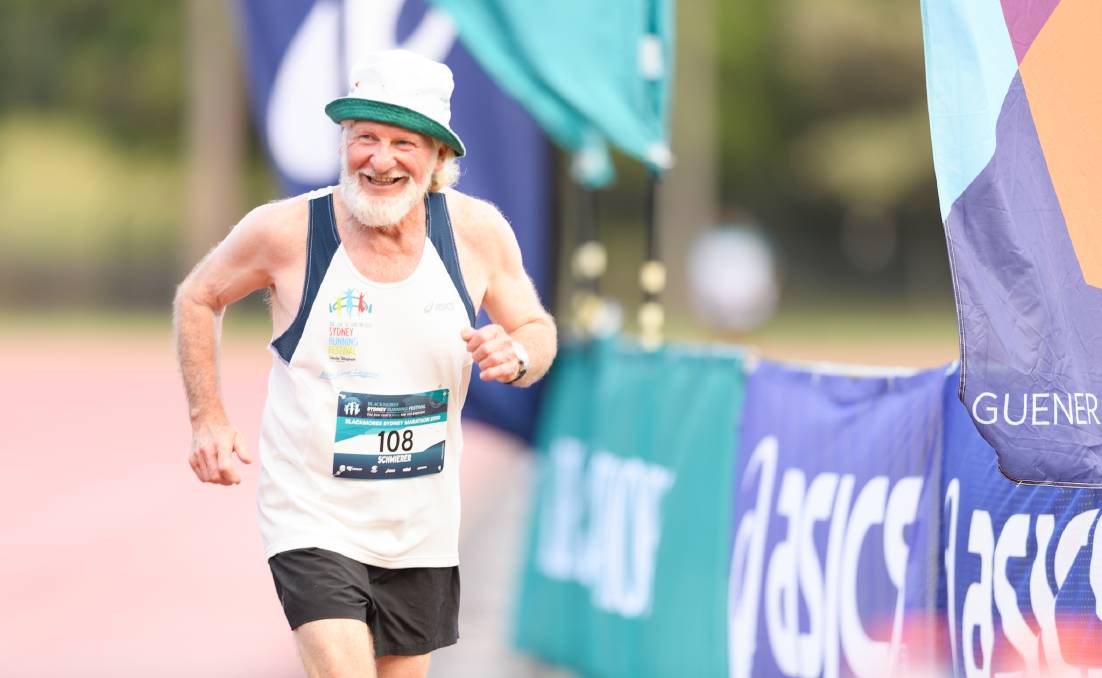 Then second finisher of the day was Frenchs Forest man Graham Wye, 59, who completed his 87th marathon in a time of 3:43:44. He was joined by 52-year-old Grant Deitch, from Woonona, who showed true determination completing the 105 laps in a time of 06:54:3 despite coming straight from an overnight shift.

The five men were joined with the only female legend, Jo Tebbutt, 54, who has completed over 100 marathons and ultra marathons.

She finished the event in a time of 3:50:59 and said she was excited to get back to racing. "There's nothing like being part of a race, its inspirational to see people like Ray at 71 still running marathons, and to have the stars to shoot for."

Ms Tebbutt said running is her form of meditation. "It releases much needed endorphins to maintain a positive outlook on everything in life."

"It is so inspirational to see the Blue Line Legends today," said Mr St Lawrence. " I know how hard it is to be fit enough to run a marathon every year for 20 years is impressive."

Blackmores Sydney Running Festival Race Director, Wayne Larden, said the runners were very excited to be able to take part in this event. "In a typical year, the legends would complete the Blackmores Sydney Marathon alongside attending many other runs across Australia.

"It's been a tough year for runners and marathon tourists not being able to travel to their favourite events and compete.

"We know runners are still passionate about taking part in events. The Blue Line Legends are a group of runners who are close to our hearts having taken part in our event every year since the event started. We are delighted to give them this opportunity to continue their commitment to the Blackmores Sydney Marathon."

The 2021 Blackmores Sydney Running Festival will take place on the 19 September 2021. The 2021 event will see the 20th running of the event, after this year's cancellation. Early bird entries are available now at www.sydneyrunnningfestival.com.au