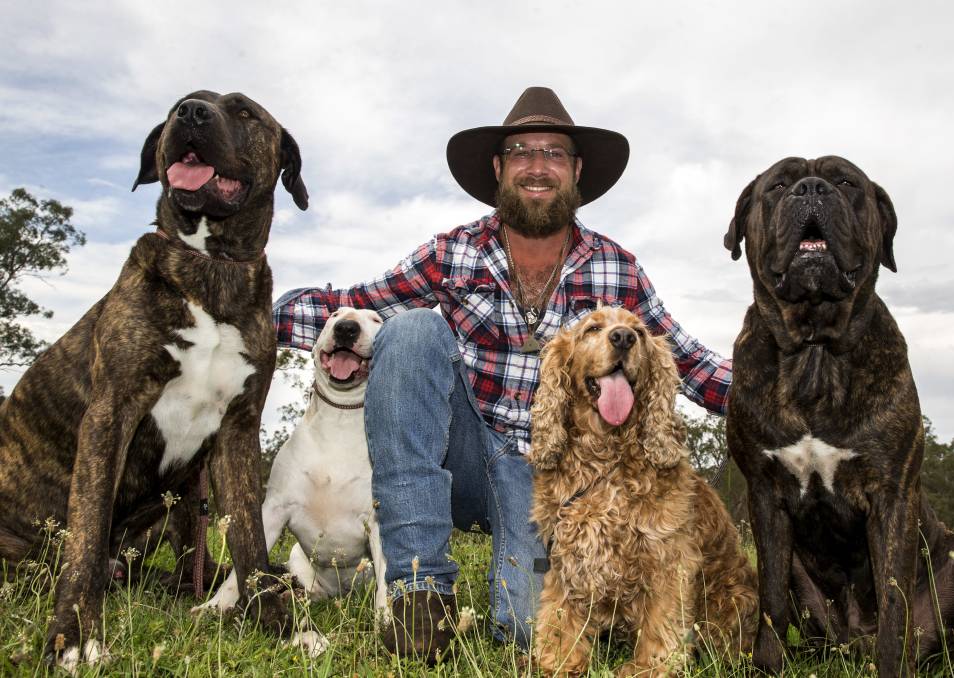 Motley crew: Bear Hasofer aka Bear the Dog Behaviourist with Bull, Bindie, Odie and Ollie, at his Ebenezer farm where he performs obedience and behavioural training. Picture: Geoff Jones

Bear the Dog Behaviourist takes the Gazette on a tour of his Ebenezer farm.

There are 14 dogs on Bear and Chantelle Hasofer's property but I can't hear a single one - no cacophony of barks to warn of my intruder status, not even the odd yap or ruff to pull rank.

There is Bull, though, watching us from over the fence. The Mastiff-cross cuts an imposing figure - he's as tall as I am sitting, it turns out - but when he is invited to say hello he nuzzles in my lap like a small horse looking for a scratch behind the ears.

He's used to getting affection here at Bear the Dog Behaviourist's farm in Sydney's north west. But it wasn't always that way for Bull, aka Big Bull, who came in as an aggressive rescue.

Considering the size of him, the fear would've been real for his carers. But not for Bear, who took him on - and Bull never left.

The same goes for the goose that hated people until Bear sized it up. He does that; looks at an animal and its body language, and works out what it needs him to do for it.

He even clocks me: I don't tell Bear this, but when I visit the farm, the hurt of losing a childhood friend in a car accident earlier in the week is raw. Bear and Chantelle let me spend some time looking around the farm at the animals and say I'm welcome back any time - it's as though they know I need it.

There's a sense of calm and being accepted into the pack when you walk onto Bear and Chantelle's property. Dog trainers Sophie and Patrick are just as welcoming.

Looking back now, I think I almost get what it feels like to be an animal who comes onto that farm.

Later on that day, something I will come to realise was one of a never-ending slew of quotable mantras from Bear will stick with me: "You can't love someone if you're too busy judging them."

He's a bit of an all-round animal whisperer, it turns out.

Having experienced upheaval and displacement as a child, Bear sees a bit of himself in every frightened canine that comes onto his property.

Though Bear talks a million miles an hour, for the listener it's like tuning-in to radio noise and eventually settling onto the right frequency.

Bear trains dogs by dialling-in to them: connecting and communicating. Though he tells me his practices are based on behavioural psychology, I get the sense that a little bit of Bear's spirit rubs off on all his clients - and that's what makes him so successful and sought-after as a dog trainer.

Bear has a background in training high-performance dogs overseas. Bear says: "I see lots of dogs that need to be re-homed. Also dogs that are pulling on the lead, not coming when called, or displaying aggression or territorial behaviours."

First, he builds rapport without a lead.

"We use love and praise. Direction - never correction. Showing them what to do, practicing it, and promoting self satisfaction.

"We teach affection, love, trust and safety. But not with treats - just food, water and shelter.

"Touch is important. We also generate value out of our voice."

What does Bear see in the dogs that come to his farm? It comes from "a very deep place", he tells me - especially for the ones that have challenges.

"Because I was in that place myself. I know what it's like to be traumatised and how you get through it. I see the dogs and I see myself in them too," he says.

"The clients and owners also empower me. A lot of people underestimate what dogs can do."

Bear's wife Chantelle adds: "Dogs communicate beautifully, they're pretty straight up and down."

Bear says: "They have systems, rules and codes."

It's the owner's job to learn what these are.

Life on the farm

Bear's always up in the morning when Chantelle rises. Out of bed by 4.30am, he spends time meditating and tending to the array of animals on the Ebenezer property: chickens, two breeds of geese, horses, sheep, and (of course) dogs.

"I feel very strongly about looking after our animals before commencing my work for the day," Bear says.

The couple also has two children, aged 5 and 8, who attend school nearby.

Chantelle says the Bear the Dog Behaviourist team trains a lot of dogs for Deaf Dog Rescue - something close to the hearts of the Hasofer family.

"Both our children are deaf, and they have cochlear implants, but we all know how to sign," Chantelle says.

Bear says dogs are "masters of body language," adding that, whether he's working with a hearing or non-hearing dog, it still doesn't use words, so "creating that connection" is key, and is ultimately what he teaches his clients. 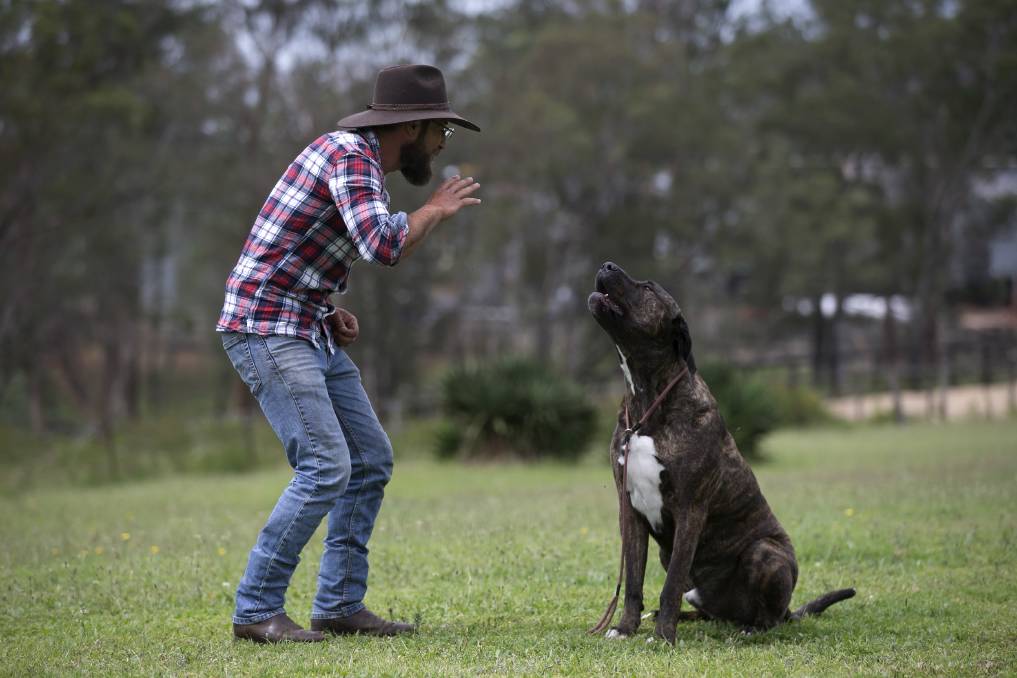 "Then, rather than waiting for the dog to do something and stop them, show them beforehand what they should do. I teach people so it's easy for them to align with their value system - it doesn't matter if they have their dog on the bed, or they feed it first before they feed themselves."

Chantelle says Bear brings the same patience and heart to parenting their children.

According to Bear, to dissuade his children from chasing the geese, he simply said to them: "Anyone can chase geese - that's not the game. The game is: to see if you can make the geese chase you."

"I've always had a connection with animals and been able to understand them. I've learned a lot of theory, behaviour and psychology, but a lot of the time I translate my gut feelings into words and repetition and methodology. If you can replicate it then you can teach it," he says.

Bear's still giving me quotes as the couple walks me towards the gate.

"I'm all about the short-long road rather than the long-short road."

As I head to my car, Chantelle says: "Something tells me we'll be seeing you again."

Indeed, something tells me the same thing.