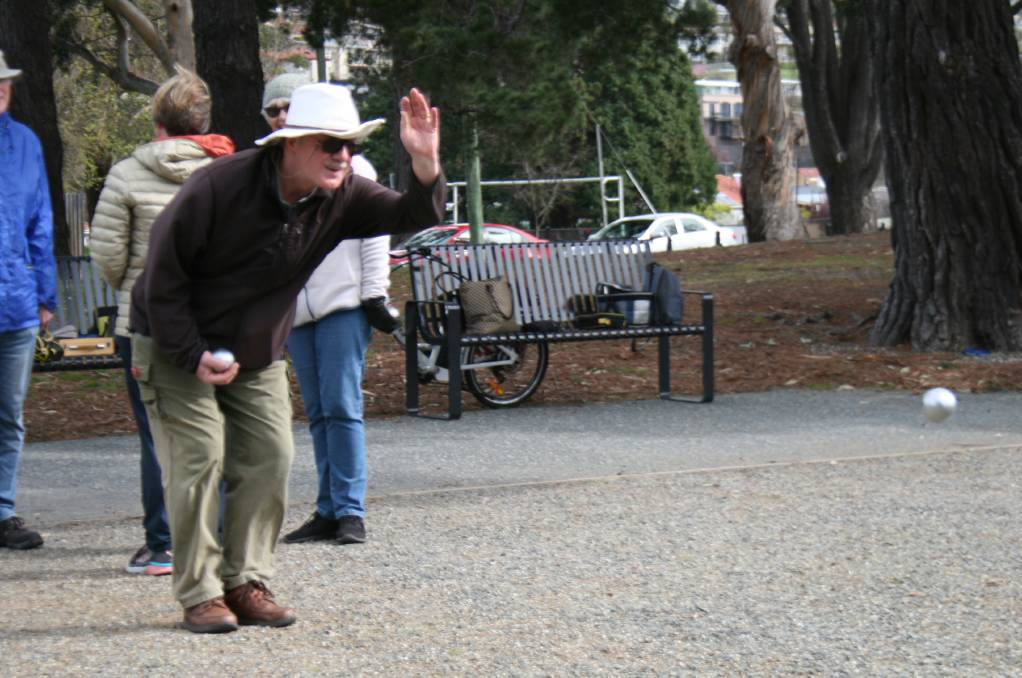 IN FULL FLIGHT: Hobart Petanque Club's Stuart Commin shows how it's done. Petanque is a sport played all over the world; newcomers are always welcome.

Easy to learn, challenging and perfect for seniors, the bowls-type game is winning friends.

Tasmania has plenty of early French connections - think of names like D'Entrecasteaux, Freycinet, Huon and more - but the one with the sport of petanque is much newer.

The sport, related to lawn bowls and the Italian game of bocce, is played around the state and on the mainland. Hobart Petanque Club, the first club in Tasmania, celebrates its 25th year in 2021.

Its president, Judy Whiteaker, who has been a member for about 11 years, said it came about after "a couple of people went to New Caledonia, saw the locals playing and said, 'That looks fun'.

"When they got back, they started playing in a small group wherever and whenever, and the club just grew out of that." she said. "Today we've got about 60 members."

Petanque is believed to be the fastest-growing bowls-type sport in the world. Its beauty, Judy says, is that the rules are simple (see below), it doesn't cost much to get started - a beginner's set of three boules (silver balls) costs as little as $30 - and the camaraderie is great.

Judy said some clubs were started by French expatriates, for example, the late Bertrand Cadart, the flamboyant mayor of Glamorgan Spring Bay, who wanted petanque areas all along Tasmania's east coast.

"It's just a lovely game to play - I say it's the only game you can play with a boule in one hand and a glass of wine in the other. Some people even claim they play much better after a few!"

The sport can be played solely for leisure but also competitively - last year a Tasmanian team, of which Judy was a member, won the national over-60s event. 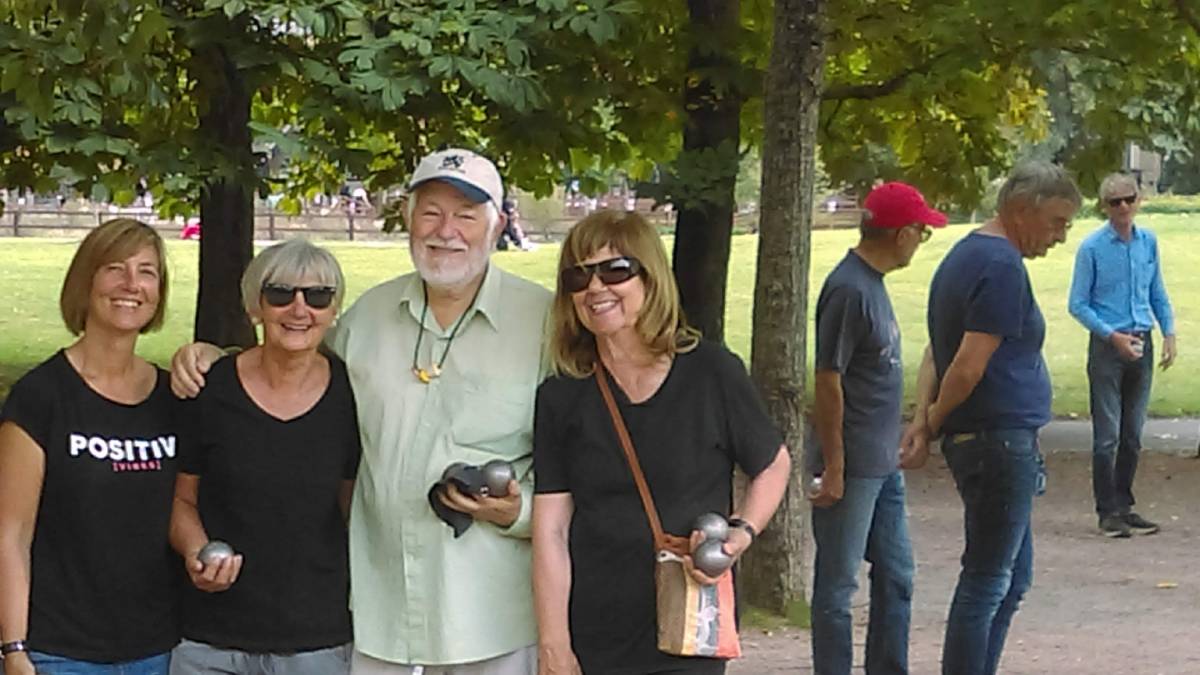 HAVING A BOULE: Judy Whiteaker (second from left) at London Petanque Club in Vauxhall flanked by her daughter Giselle and friends and fellow petanque players Dave and Carol Ward, from South Australia.

It can get a little serious at the top at times. Judy told of an incident at a recent huge competition in Marseilles.

"It's a knockout-type competition and they had to call the police because a French team was beaten by a Belgian team and reported the score the other way round. They were chased all over the place!"

Judy said petanque is played throughout France, but mostly in the south. "You'll find little villages where people meet and play petanque in the evenings."

Her first encounter with petanque was in one such village while on long-service leave doing a French-language course. "I was fascinated and watched it for ages."

But she didn't pick up a boule until about three years later when, back in Hobart and, frustrated with her golf game, she chanced upon a flier for the club. Before long was an avid player, part of a group so devoted that members were known to keep playing after sunset with the car lights turned on!

Judy, now retired from Southern Cross University, where she had a career in international education, says she loves the sport for its inclusiveness.

"In France it's more men than women, although that's starting to change now. And that's the good thing about it: you can compete on an equal footing, because it doesn't require a lot of strength - it's more about accuracy and hand-eye co-ordination.

She said that unlike lawn bowls, where you bowl with your palm facing the direction you want to go, "in petanque, the palm faces downwards, giving the boule backspin as you roll it off your fingers." She describes it as almost like a putting swing in golf, a pendulum movement.

But that's just part of it. While petanque may looks simple, it can be mentally stimulating, with a lot of strategy and even guile involved. And while for most it's a low-energy activity, it gets players walking, stretching, strengthening and breathing in lungfuls of fresh air, often in beautiful surroundings.

Hobart Petanque Club meets at Sandown Park in Lower Sandy Bay on Mondays, Thursdays and Sundays from 1pm, Twilight games are held f during summer trom 4pm, including a meal together. To learn more visit the club at www.facebook.com/HPCEvents,call Judy on 0419-506-051 or email secretary@hobartpetanqueclub.com

To find a club anywhere in Australia, click here.

Petanque is played on a piste, a mainly gravel surface 15 metres long and four metres wide. Teams comprise one, two or three players. The aim is to score points by having boules closer to the cochonnet, or jack, than one's opponent after all boules have been thrown. Players can also score by hitting their opponents' boules away from the target, while standing inside a circle with both feet on the ground.