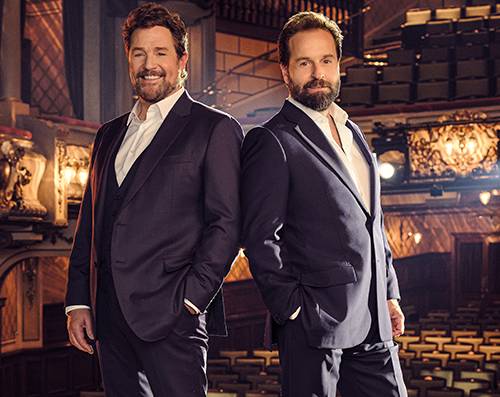 The ultimate musical duo, Michael Ball and Alfie Boe, are set to delight cinema audiences around Australia with Michael Ball & Alfie Boe: Back Together. T...

The ultimate musical duo, Michael Ball and Alfie Boe, are set to delight cinema audiences around Australia with Michael Ball & Alfie Boe: Back Together.

The final show of their 2020 UK tour earlier this year, filmed at London's O2 Arena, the performance will screen in selected cinemas for one weekend only - November 7-8.

Following their star turns in the West End's staged concert of Les Miserables, the superstar pair take on their favourite musical theatre, pop and rock tracks, including songs from The Lion King, The Greatest Showman and The Phantom of the Opera as well as a brilliantly arranged Queen medley.

Showcasing their phenomenal voices and on-stage chemistry, Ball and Boe light up the big screen at venues including major multiplexes and many independent cinemas and arts centres.

Audiences will be treated to exclusive behind-the-scenes footage and interviews with the superstar pair.

"After a long and unexpected delay, we're excited to finally be able to share the final show of our 2020 Arena tour on the big screen," the performers said.

"If, like us, you've missed the magic of live music during the pandemic, please come on down to your local cinema to watch our concert filmed at the iconic O2 Arena in London.

"We had so much fun performing at this show before the world turned into a crazy place. Hopefully, we can spread some of that joy and live entertainment through the screens with you and all remember what it's like to be at a concert."