ANU staff have been told every college and portfolio will be under review. Picture: Jamila Toderas

More job cuts are on the way at ANU.

The loss of the international student market is entirely to blame for the Australian National University's decision to cut 215 jobs, vice-chancellor Professor Brian Schmidt says.

On Wednesday ANU staff were told every college and portfolio would be under review in an attempt to save about $103 million per year from 2021 with half of the savings expected to come from salary expenses.

This is on top of the 250 staff who have already accepted or are about to accept a voluntary separation this year.

"Essentially everything you see today is entirely due to the loss of international student revenue," Professor Schmidt said.

"That is a big shock. It is a shock that is not going to fix itself quickly."

The vice-chancellor said some research activities would have to cease and there could be changes made to the course offering beyond 2021.

National Tertiary Education Union ACT division secretary Cathy Day said the job losses were a result of the federal government failing to adequately fund universities and not providing support during the pandemic, such as JobKeeper.

"We're in an absolute job tsunami, estimated at about 30,000 job losses across across all of Australia.

"And with the ANU having lost or about to lose a total of roughly 465 staff, that's going to have a disproportionate effect on the ACT economy because the tertiary education sector is quite large here." 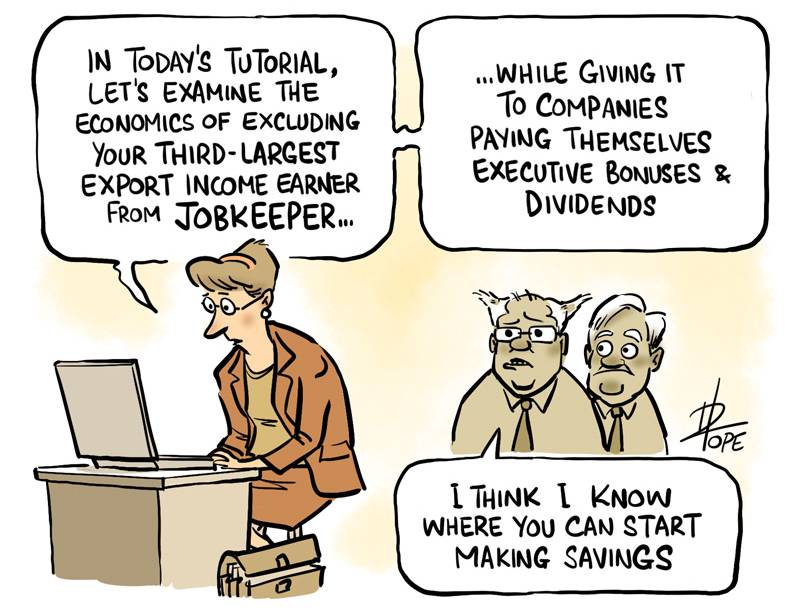 Dr Day said staff were concerned the job losses would reduce the quality of education and lead to increased workloads on remaining staff.

Professor Schmidt said JobKeeper would have been useful in the early phase of the pandemic but it wouldn't have addressed the issues of declining international student revenue.

"The thing we really need, I think, that has been completely put into disarray, is a research package. And I know the Minister of Education has spoken about the possibilities of that and so I think we're all looking towards the October budget with hope that something will be there."

He said the current caps on places were unhelpful.

"Make no mistake, the loss of a further 215 jobs at ANU is the fault of the Morrison Government, which has actively undermined the viability of Australian universities during the pandemic," she said.

"ANU has substantial cash and investments of more than $1.79 billion as at the end of 2018," Mr Tehan said.

In the Recovery Plan: Initial Change Consultation document circulated to ANU staff, the university claimed the pay rise deferral that was agreed to by all staff saved $13.5 million, the equivalent of up to 90 positions.

The plan says revenue is estimated to be $1.093 billion in 2021, given the expected size of the student cohort.

"With no further action to address our cost base, ANU will face a deficit of $192 million in 2021 and a continuing deficit of similar magnitude per annum in 2022 and 2023," it said.

The university council requires the institution to have $250 million in cash reserves each year.

The plan said Finance Minister Mathias Cormann agreed to increase ANU's debt limit to $800 million shortly after the onset of the pandemic.

"Currently, approximately $615 million of this limit has been utilised, although only $315 million of that utilised debt is currently drawn down," it said.

The university will reduce capital works plans for 2021, focusing on works in progress and safety and compliance building work.

The ANU has begun a two-week period of staff consultation. Detailed change management plans, including where jobs will be lost, are expected to be released from October 6.

Professor Schmidt said an independent auditor was appointed to examine the recovery plan.

"We are where we're at because we had no other choice," he said.

The story ANU to axe 215 jobs as part of COVID-19 recovery plan first appeared on The Canberra Times.