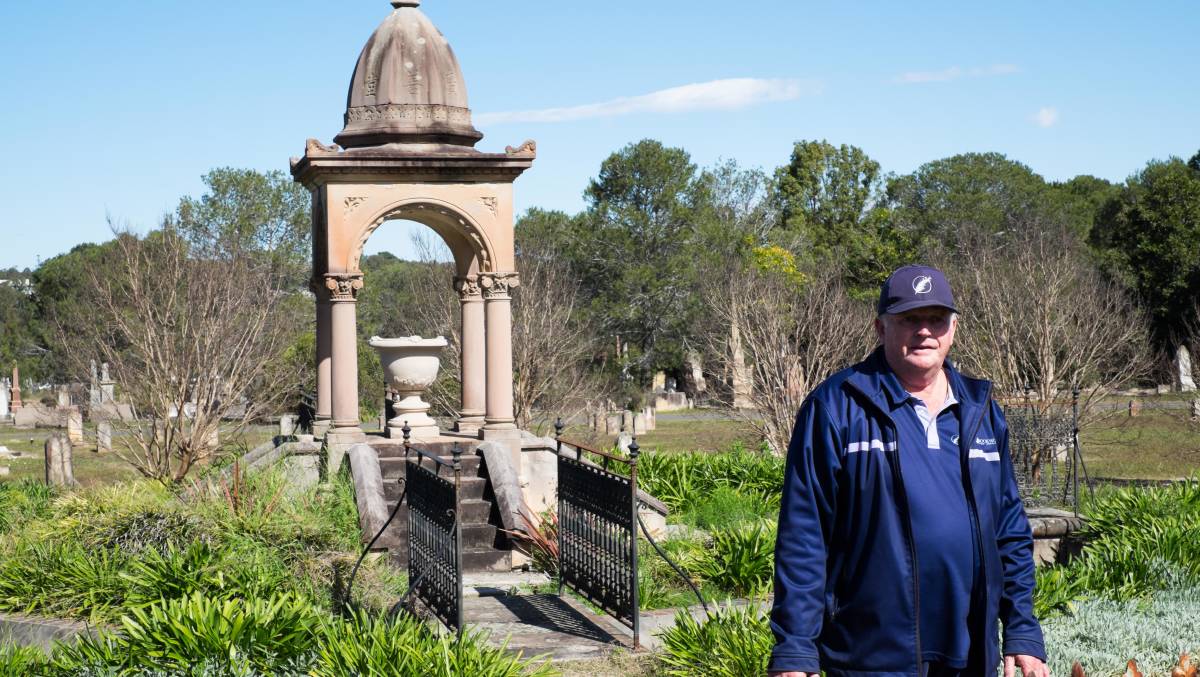 GRAVE CONCERN: Tour guide Mark Bundy in front of the Quong Sing Tong Temple which was built in 1877 in a classical European style so as "not to offend the nearby Presbyterian mourners".

Sadness and humour combine on an eye-opening visit to the historic dead centre of Sydney.

WHEN Mark Bundy applied for a grave digging job at Sydney's Rookwood Cemetery, he was asked "Are you married?", "Do you have children?" and "Do you have a mortgage?". After answering "Yes" to all three questions, he was told "You start on Monday". That was over 25 years ago.

No longer called gravediggers, he and his colleagues are now known as a burial or funeral technician. Today I join him on his first historical tour of Rookwood since the coronavirus lockdown.

The tour has changed slightly. Instead of piling into a minibus, participants drive themselves around this vast cemetery, slowly following Mark's ute in a fashion not dissimilar to a funeral procession.

People from more than 90 different religious and cultural groups are buried in Rookwood, all with their own rituals and customs.

I learn that Jewish coffins are plain, free from metal and have rope handles. And that a Muslim funeral director removes the suitably wrapped deceased from the coffin and places the body in the grave on its side, facing Mecca.

Rookwood is one of the oldest working cemeteries in Australia and the largest in the southern hemisphere. Consecrated in 1867, the location for the necropolis was chosen because of its proximity to the Sydney to Parramatta railway line.

Until 1948, a twice daily train carried corpses at no charge and mourners who paid one shilling each, from Mortuary Station near Central to Rookwood. Mark leads our procession of cars to "receiving house number one", the largest of the four Rookwood Stations.

The footings are all that remains from this decorative sandstone station and are "a testament to the start of Rookwood", explains Mark. The building is now in Canberra. Dismantled brick by brick, transported in 83 semi-trailers and rebuilt it is now All Saints Church of England in Ainslie.

Death is sad and serious but Mark injects humour and interesting anecdotes into the tour. Yes, we squirm at some of what he tells us about the realities of what happens after burial, but we also chuckle at his stories.

The origin of the word "wake" in funeral terms can be traced back to when mourners held a party at the graveside keeping watch in case the deceased woke up. A string tied to the deceased's finger was passed through a hole drilled into the lid of the coffin. Should they wake up, they could ring a bell at the end of the string to attract the attention of the person doing the "graveyard shift", that is, keeping watch overnight.

We walk across to the Chinese section of the cemetery and the Quong Sing Tong Temple, which Mark says was built in a classical European style so as "not to offend the nearby Presbyterian mourners". Of course, this was back in 1877.

The smaller and obviously Chinese metal structure was where mourners burnt paper money and let off firecrackers to honour the dead and ensure they had a rich afterlife.

Mark points out the grave of colonial architect James Barnet, who designed many Sydney buildings including the GPO. Other well-known Australians buried in Rookwood include retailer David Jones, publisher John Fairfax, premier of NSW Jack Lang and businessman and merchant Mei Quong Tart.

Headstones range from simple white crosses to symbolic gravestones. Mark explains that a broken column symbolises "a life cut short", while a draped urn represents "the ashes of life". One elaborate vault in the shape of St Mary's Cathedral houses John Watson who loved the cathedral and whose name is carved into the flowers above the doorway.

Without Mark's expertise and knowledge, we wouldn't know about James Ross Logan, a tram driver who died when the motor fell on him. The number 37 steam tram carved into his headstone reflects both his profession and how he died.

Black crows (rooks) fly across the clear blue sky squawking loudly. According to one story Rookwood was named after them. We stop to listen. Apart from birds chirping in the trees, there's a peaceful silence echoing Rookwood's motto to "Respect, Reflect and Remember".

More symbolism is evident in the Martyrs Memorial designed by Harry Seidler. Remembering Holocaust victims, the black granite and cobblestones represent the buildings and streets of Europe. Jewish people place stones on graves as opposed to flowers as stones remain forever while flowers die.

Our group becomes still and sombre as we look out across the green neatly mown Baby Lawn. Thirty thousand stillborn babies rest here. Beyond the lawn is the Circle of Love, where babies and children whose lives were cut short are remembered.

Mark points to a child's face among the many children's faces on a brass plaque. Pictures of his child and children of other grave diggers were used to remember the babies and children in unmarked graves across the cemetery.

On a lighter note, Mark tells us that an urn need not cost much. Any container, "even a beer bottle", will do. One woman wanted an egg-timer for her husband "so the bugger keeps working".

As Mark says "After working here, nothing surprises me."

Rookwood Cemetery is vast. A two-hour tour only scratches the surface of the history of this sleeping city. It also answers questions we are often too afraid to ask about what happens to the bodies of loved ones.

Tours of Rookwood are free. You can arrange a tour for your own group Monday-Friday.

The 2020 Rookwood Hidden Sculpture exhibition was cancelled but will return in 2021.