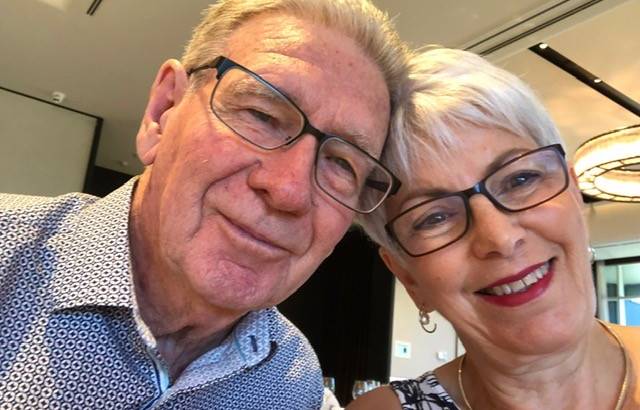 When her husband collapsed, Sophia remembered the life-saving stroke message on the fridge at home.

IT"S thanks to a fridge magnet that Canberra man David Lawrance is alive today.

Mr Lawrance, 74, was returning from a holiday in New Zealand with his wife Sophia Lawrance when he collapsed in the airport lounge.

Mrs Lawrance knew time was of the essence when her husband stood up to get a drink and fell back into his seat, losing control of one side of his body.

She remembered the F.A.S.T test (Face.Arms.Speech.Time) because of a magnet on her fridge at home, and instantly recognised it could be a stroke.

Mrs Lawrance said she trusted her instincts even though David was able to talk clearly and lift his arms at this stage.

"David had not been feeling well and I knew something was not right so I alerted the staff," she said.

"While we waited for an ambulance David's symptoms became more prominent. His face started drooping and he was slurring his words. It was clear he was having a stroke."

Fortunately, the couple was able to get through customs quickly and Mr Lawrance was taken to hospital. It is likely Sophia's quick thinking saved his life.

The couple is sharing their experience to mark National Stroke Week, August 31-Sept 6 - troke Foundation's annual stroke awareness campaign. They want to highlight how important it is for everyone to be able to recognise the signs of stroke and to seek medical help immediately.

One in four people globally will have a stroke in their lifetime. Stroke can change lives in an instant and can strike anyone, anywhere and at any age.

"This National Stroke week we are acknowledging the F.A.S.T Heroes in our community like Sophia and asking others to become the next generation of hero by simply learning how to recognise a stroke and to call triple zero (000) at the first sign of stroke," Ms Paton-Kelly said.

"We know the faster a stroke patient receives medical treatment, the better their chance is of survival and successful rehabilitation."

F.A.S.T represents the most common signs of stroke. Other signs HERE.