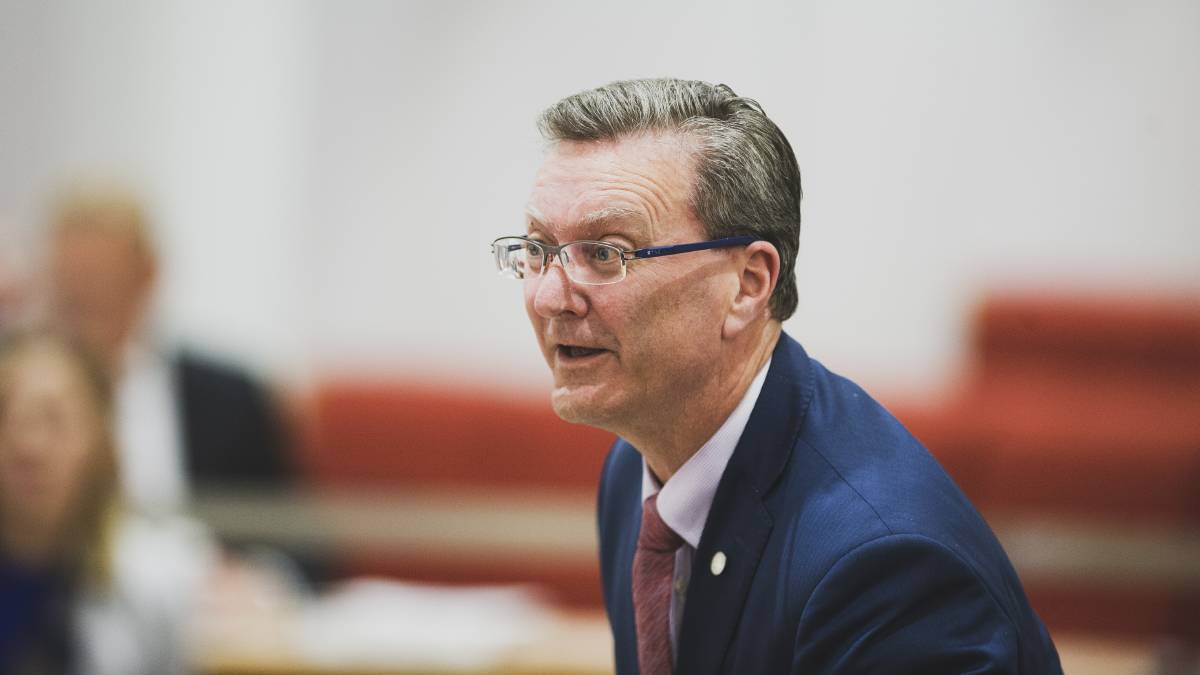 ACT Attorney-General Gordon Ramsay was emotional as he defended the bill as being compatible with the Human Rights Act. Picture: Dion Georgopoulos

The controversial passed with an amendment to protect freedom of religious expression.

A law to criminalise sexuality and gender identity conversion practices was passed on the final sitting day of the ACT Legislative Assembly before the October election.

Under the legislation, it is an offence to perform a sexuality or gender identity conversion practice on a child or individual with impaired decision-making ability. It is also an offence to take a person outside the ACT for this purpose.

The law provides exceptions for healthcare providers who are performing a treatment that is safe and appropriate.

People providing assistance to children considering a gender transition, assisting them to express their gender identity or facilitating their identity exploration and development are also not considered to be performing a conversion practice under the legislation.

Attorney-General Gordon Ramsay became emotional as he defended the bill as a well-considered piece of legislation which was compatible with the ACT Human Rights Act.

"I have led congregations and communities of faith where people have sought refuge after being subjected to conversion therapies that have been done in the name of the church, and even at times in the name of God," he said.

Mr Ramsay said it was necessary to have criminal sanctions, in the form of a fine of up to $24,000 and 12 months' imprisonment.

"There is an insidious and clandestine manner in which these practices are carried out, mostly against children," he said.

"It is a form of abuse. It is a profound violation of human rights and abuse of young people is not appropriately or best covered by civil regulation. And that is why criminal sanctions ought to apply."

Chief Minister Andrew Barr moved an amendment to add a note which states that a mere expression of a religious tenet or belief would not constitute a sexuality or gender identity conversion practice under the legislation.

He said there had been some misguided advertising campaigns against the bill run by organisations from outside the territory.

"That claim is wrong. It is abject nonsense and it does no credit to the individual who's put that forward."

Opposition Leader Alistair Coe said the definition of a conversion practice was too broad and that the bill should be sent to a committee to be debated by the next Legislative Assembly.

"This legislation is far too important to ram through the assembly in just 14 days," he said. "In other jurisdictions they have contemplated and considered these issues for many, many months."

Mr Coe's amendment, which included protections for teachers and parents, was defeated.

Mr Barr said the bill was specific and did not mandate that parents must be accepting of their child's sexuality or gender identity, nor did it prohibit them from raising them within their chosen faith.

"No piece of legislation can mandate parental acceptance of a child," Mr Barr said.

The legislation will come into effect in six months and will be reviewed after two years.

The law will allow victims to make a complaint to the ACT Human Rights Commission.

If it is not successfully conciliated, it can be referred to the ACT Civil and Administrative Tribunal.

The story Ban on 'insidious' gay conversion practices becomes law in the ACT first appeared on The Canberra Times.