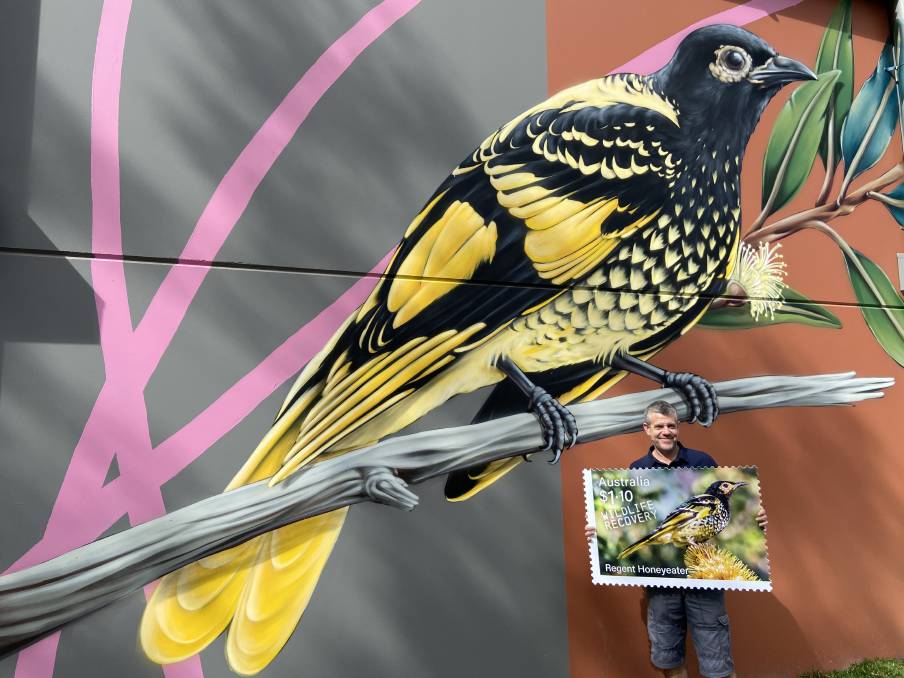 Mick Roderick stands beside the magnificent mural of a Regent Honeyeater at Pokolbin Distillery in Pokolbin, with an oversized version of the new stamp.

One man's mission to keep this beautiful bird alive.

Mick Roderick is all excited.

The early signs - the very early signs, to be honest - are that the most recent attempts to increase numbers of the critically endangered Regent Honeyeater in the NSW Hunter Valley have proved productive.

Earlier this year 13 captive-bred Regent Honeyeaters, one of Australia's most threatened species, were released into the wild and while there has been some attrition, Mr Roderick is delighted with progress.

"We tracked a couple of the birds and while all aren't still alive, that's to be expected," he said. "Goshawks and butcher birds will prey on them, especially as they're not familiar with predators in the wild.

"But many are still with us, and one bird in particular took us to another spot about 30km away where we discovered another six Regent Honeyeaters in the wild that we didn't know existed."

When you're getting excited about another six birds, it gives you an idea of the very small numbers we're talking here.

Mr Roderick is a member of the Regent Honeyeater recovery team, and works for Birdlife Australia as its NSW Woodland Bird Project Manager.

"The Regent Honeyeater takes nearly all of my time," he admitted. "It can be a difficult bird to work with because it moves around looking for the best blossom.

"In some seasons it will only breed in the Hunter Valley which makes this absolutely crucial habitat. Unfortunately it's also bushfire country which adds to the problem.

"But we know that captive bred Regent Honeyeaters have shown they will breed with wild ones, so we're really hopeful. I think - I hope - we can still save them."

One of the ways to do it is to raise awareness, and that's why he is a keen supporter of the new move by Australia Post to educate students on the conservation and preservation of animals.

Every August is Stamp Collecting Month and this year's Australia Post theme is Wildlife Recovery - raising awareness of endangered species. One of the new stamps is the Regent Honeyeater.

"I think it's a great idea to introduce primary school aged children to animal conservation," he said. "It helps lift the profile of the Honeyeater.

"In Australia today the koala has the highest profile of the species that are under pressure, and if we can close the gap a bit with the Regent Honeyeater it would be a good thing."

So is there another bird he's especially worried about? He doesn't hesitate.

"The Swift Parrot. It's critically endangered too, only a couple of thousand left. It flies from Tasmania to NSW each year, the longest migration flight of any parrot."

The story Australia Post puts a stamp on the plight of Regent Honeyeaters first appeared on The Maitland Mercury.