Anne Cahill Lambert is unsure when she will be able to get back to the ACT. Picture: Supplied

Canberrans with NSW travel exemptions were given no notice before they were revoked at midnight on Thursday.

Canberrans stuck on the Victorian side of the border after their New South Wales travel permits were unexpectedly revoked were unable to return to the territory this weekend as negotiations continue between the ACT and NSW governments.

Canberrans who planned to cross the border on Friday were required to apply for a travel exemption to transit through NSW. However, a decision was made at 11pm Thursday to cancel all permits at 12.01am Friday.

Those with permits to travel received an email on Friday morning advising that returning NSW residents needed to travel by plane to Sydney Airport and quarantine in a hotel at their own expense. ACT permit-holders were not told that their permits had been cancelled.

A police convoy to bring the stranded Canberrans home did not go ahead as government negotiations continued.

Anne Cahill Lambert, whose husband Rod had finished a four-month contract as a locum doctor at a Victorian hospital, said she was waiting for permission to drive to the border with their dog and belongings in tow.

A Canberra man, who did not wish to be named, was also relocating to the territory after living and working in Melbourne. 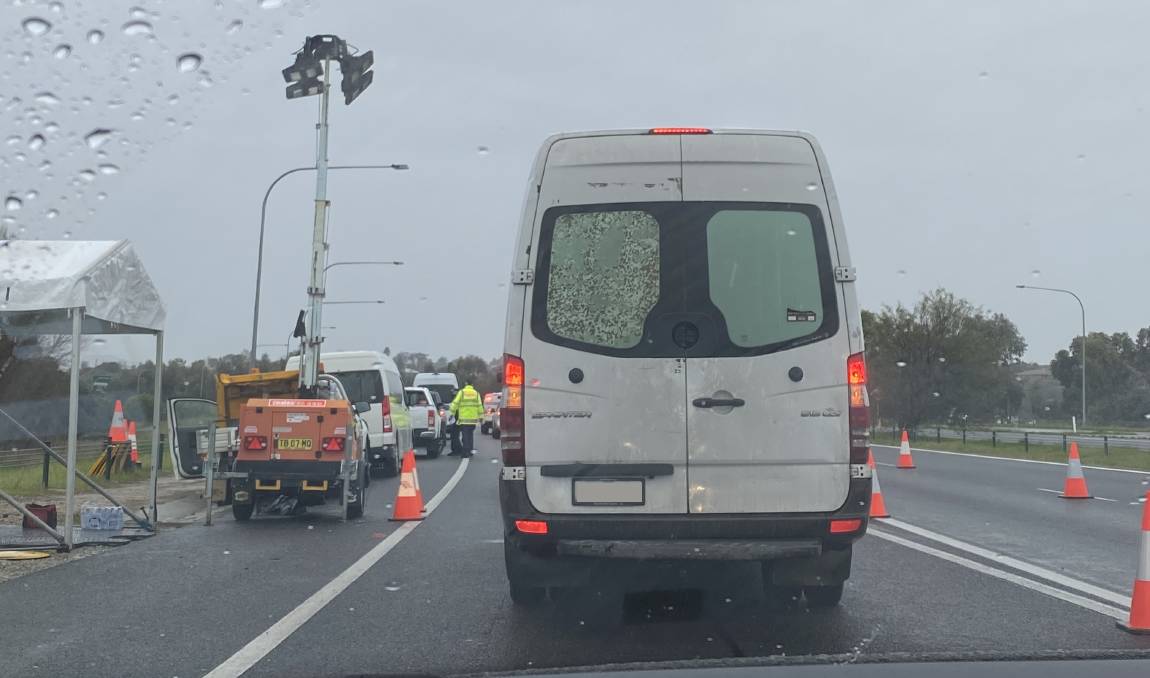 A Canberra man was turned around at Wodonga on Friday despite calling to check if his NSW travel permit was valid earlier that day. Picture: supplied

He called Service NSW once on Wednesday and twice on Friday morning and was advised that his transit permit was still valid until midnight Saturday.

However, when he approached the Albury-Wodonga border at 11am Friday police told the couple their permit was cancelled and they had to return to Wodonga.

"To have it revoked without notice is just crazy," he said.

The man was concerned that even if he was allowed to cross the border he did not have any proof of residency for the ACT as he didn't have a lease in Melbourne or Canberra.

"We have no idea how we are actually going to get home," he said.

"We've got nowhere to go back to in Melbourne. All our stuff was shipped to the ACT."

ACT Health said in a statement the ACT government was continuing to work through arrangements with NSW to help people with existing ACT exemptions who are unable to cross the Victoria/NSW border to return to the ACT.

The ACT government's COVID-19 website has been updated with the advice that the only way to access the ACT from Victoria will be by air to Canberra Airport.

"Unfortunately, the ACT is unable to change this requirement as the ACT government is not responsible for the border restrictions of other jurisdictions," it says.

Meanwhile, the stranded Canberrans are continuing to wait near the border as their frustrations and anxieties build.

"We just don't count in the scheme of Australians," Ms Cahill Lambert said.

The story 'We've got nowhere to go': Canberrans stranded at border as negotiations with NSW continue first appeared on The Canberra Times.