In-store and online grocery shopping is up all across the nation. Photo: Shutterstock.

Think the nation has stopped panic buying. Here's the statistics on what we're buying during coronavirus self isolation.

You think it was hectic at your supermarket over the past two weeks? Bet you wouldn't have thought Western Australia had the busiest aisles in the nation over the past fortnight though ... but yes!

WA's in-store grocery purchases were up 39 per cent on the previous fortnight. By comparison to the eastern seaboard states (32-33% up), South Australians took it easy in the aisles but still recorded a 23% increase in activity.

As for frozen food, any wonder you've found it difficult to come across. As a nation we've upped our frozen food buying on average by 28 per cent.

And no surprise either that shoppers in WA were keen for more frozen and canned food. Meanwhile, Queensland, about your toilet paper habit ...

Across the board there are few surprises as more than 80 per cent of us are spending money in grocery stores; 65 per cent of shoppers took home frozen food of some description while almost the same amount bought long-life or canned foods. 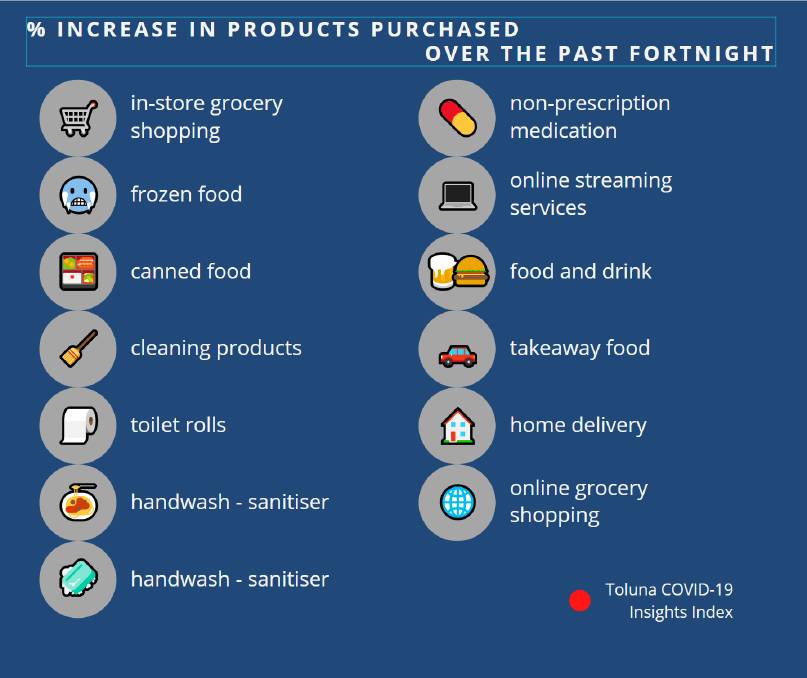 Of the 1050 Australians across five states who were involved in the survey, here are the results broken down:

Due to their smaller population bases, Tasmania, the ACT and the NT were not included in the survey.

If you're looking to stay up to date on COVID-19, sign up for our twice-daily digest here.

The story Here are the most popular items being bought in Australia this week first appeared on The Canberra Times.