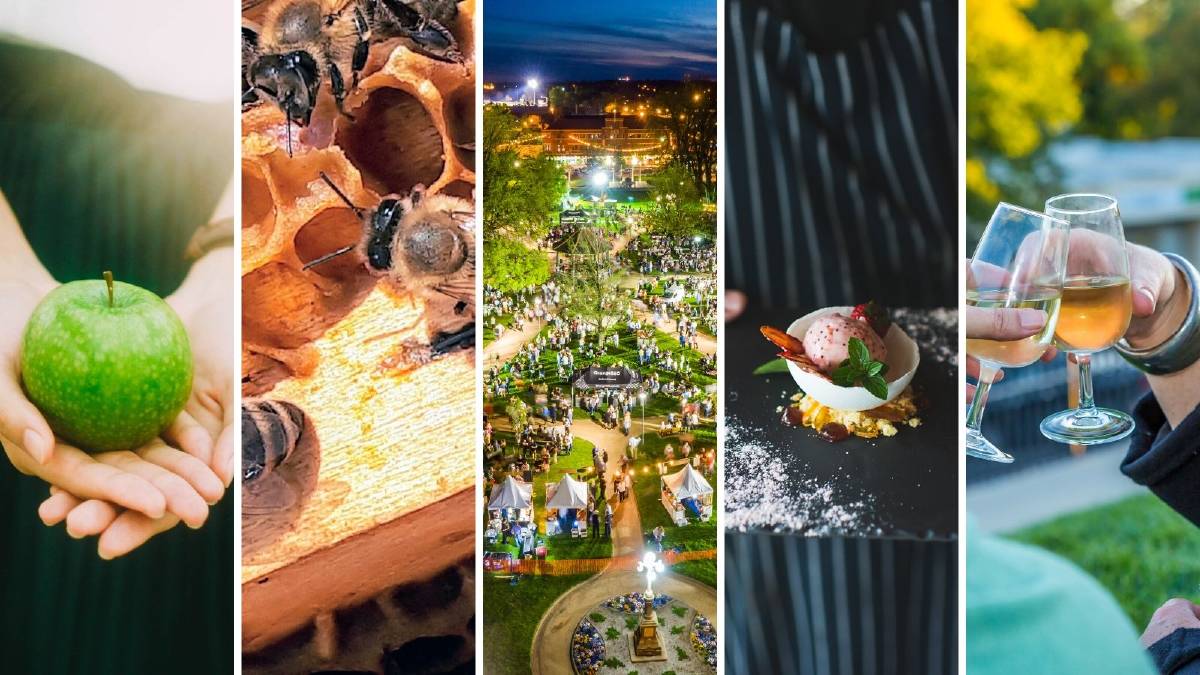 It's the antithesis of the fast, high-processed foods that flood our supermarkets.

Orange's food week layers on the country charm in its autumn celebration of fresh produce, local wine and gourmet treats.

The amber light is fresh and soft, ripe for a day in the country. Circled by maple trees, the stalls in Cook Park throng with people enjoying the treasures of the season: crisp apples; sparkling plums and other freshly picked fruits; fat, juicy olives; gourmet olive oils; fruit pies; wine and other products from the fields and orchards of the region.

An alluring combo of local food, wine, autumn and country charm, Orange F.O.O.D Week is the antithesis of the fast, high-processed foods that flood our supermarkets. Yet, it's far more than that.

Want to learn how to make cider or beeswax wraps? Or perhaps go truffle hunting or float over the countryside in a hot air balloon. Now's your chance.

Australia's longest-running regional food festival is now in its 29th year. It offers over a hundred ways to connect to farmers and the land through food and wine events over 10 days (27 March to 5 April) across the food bowl of Orange and adjacent towns Cabonne and Blayney.

About 255 kilometres from Sydney, Orange (the largest city of Central West NSW) has its own airport.

However, most make the journey by car, stopping in the countryside to stock up with goodies along the way. Tip: you might want to empty the boot before you leave.

Not only will you benefit from delicious, quality produce, you'll be supporting Aussie farmers embattled by drought, says James Sweetapple, president of the volunteer-led Orange F.O.O.D Week Association. "It's created more work, higher levels of stress and greater expenses - and we're expecting a lower return," he reveals.

Rather than donate to the Red Cross, Sweetapple suggests buying from farmers for a more direct and immediate impact. You also get a quality product in return.

Tourists have been staying away under a misconception the area has been affected by fires.

"There's been no fires in Orange," says Sweetapple.

"The closest was Lithgow, 100 kilometres away. We are here and continuing to do what we do. It's business as usual.

"If you drink beer and wine, come and buy regional beer and wine and other produce. Don't buy it from a supermarket where it can come from many places in the world and have food miles. Help sustain the financial and mental health and resilience of the local farmers."

With so many tempting foodie experiences to choose from - across the welcoming restaurants, wineries, farms and tourism outlets of the region - it's a good idea to download the program and plan ahead.

Signature events include the Night Market, Sunday Producers' Market and Brunch, and an Autumn Grazing Dinner in Blayney.

There is also F.O.O.D Train, a three-day foodie's package from Sydney to Orange, including accommodation.

The eight signature events will run in compliance with certified sustainable event standards. And, befitting the festival's focus on sustainable agriculture, the theme of this year's event is honey.

"If we lose bees in the world, we starve," says Sweetapple.

"They are part of the ecosystem."

The Beekeepers Inn, 30 kilometres from Orange, offers honey samples of eight varieties, including the local yellow box and stringybark, produced by the farm's beehives.

The former Cobb and Co inn dates to 1859 and sells honey beer from its onsite brewery as well as local products.

As part of Orange food week, the family-owned business is also offering a workshop on how to make beeswax wraps ($55 including lunch), and honey and beer tastings at its Beers & Bites session.

Along with honey, and related to bees, the food festival is also a chance to learn about the diversity of fruit.

The festival's Orange Apple Ramble takes you for a jaunt through local orchards, including third-generation family-run Thornbrook Orchard.

Paula Charnoch, whose grandparents established the Nashdale property in the 1950s, says the pick-your-own orchard grows many varieties of apples, peaches and nectarines, plus figs, black muscat grapes and about 20 types of plums.

"We try and grow a couple of each varieties so you've got a continual, fresh supply."

"We don't use anything that's artificial in any shape or form," he says.

"Tomatoes we leave on the bush till properly vine-ripened, and we use the older, tastier varieties."

Dowling preserves all veggies within 24 hours of picking to ensure a superior product. He also makes his own lavash bread from locally grown spelt. His products can be sampled at the Night Market and Sunday Producers' Market.

And, with over 60 local vineyards in the Orange area, there are plenty of ways to experience your vino over the festival, including while enjoying music, art, croquet, a picnic, watching a movie or comedy, or even a yoga class in the vines.

For an educative touch, Cargo Road Wines' James Appleby is hosting sunset walks and talks, as well as tastings of wine and honey in his vineyard, while sharing his holistic approach to agriculture.

But, wine isn't the only drink made in the region. Beer, cider and roasted coffee are produced here, too. Alternatively, sip your choice of drop from one of the many premium restaurants in the area.

From the intimate Sisters Rock Restaurant at Borrodell Vineyard, one of Australia's highest-altitude vineyards, you can watch the sun go down over the vine-draped hills of Mount Canobolas.

A highlight of the night is the Bramley apple pie, baked from the estate's own organic apples. Just as sensational is the cherry port, also derived from Borrodell's orchard.

After you've feasted on all that glorious food and wine, you might want to explore a more active side of the "Colour City" (Orange's other claim to fame is its autumn beauty). More of a secret is its vast network of cycling trails winding through town, past farms, gardens, wineries and kangaroos. Grab a copy of the "Ride Orange" booklet from the Orange Visitors Centre for a complete list of trails. Top stops for a picnic include Cook Park, Orange Botanic Gardens and Lake Canobolas.

The city boasts three golf courses, including Duntryleague on which the historic 1876 Duntryleague Guesthouse looms like a watchful ancient aunt over the graceful tree-lined greens. It's a great place to stay and enjoy the golf course's acclaimed botanic beauty.

At the end of the night there are scores of other options for a cosy sleep before the journey home - from vineyard stays to boutique hotels and cute B&Bs.

If you miss food week or run out of time to try it all, take cheer.

"Every week is food and wine week in Orange," says Sweetapple.

Top choices for Orange, whether you want a bed in the vineyards or a night in a town hotel. 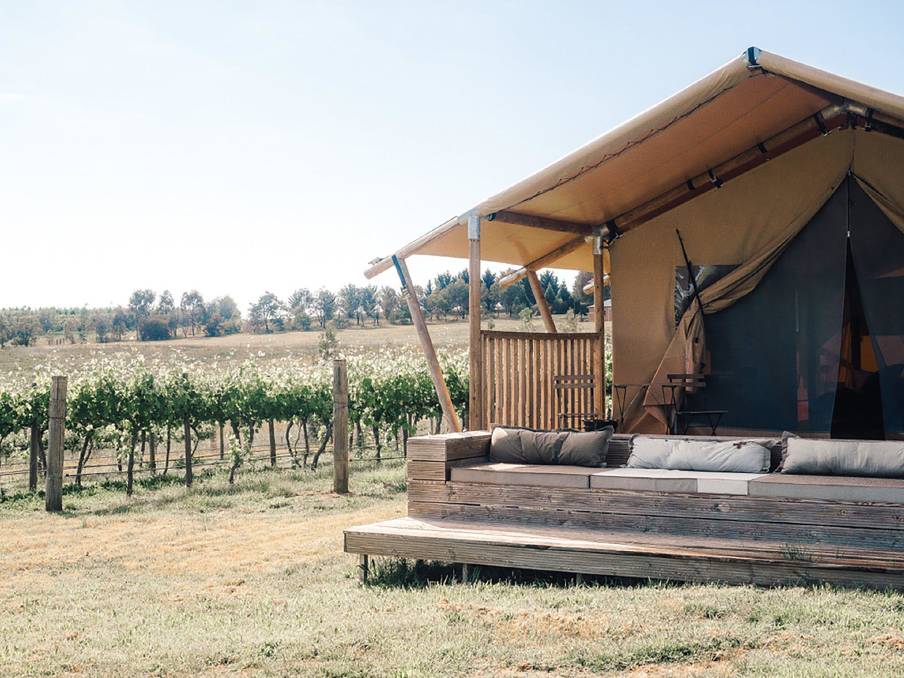 Sleep among the vines at Nashdale Lane.

Orange's version of glamping: think luxury cabins in the vineyards, sweeping views and a full nature immersion, plus award-winning wines on your doorstep (the cellar door is an old repurposed apple-packing shed). A light brekky and complimentary wine tasting is included in the rate, which starts at $375 per night. See nashdalelane.com Views for miles in the cider suite at Borrodell Vineyard.

Sleep among the vines and fruit trees and wake to birds and kangaroos at this picturesque vineyard in the Towac Valley, 15 minutes outside Orange. Choose from the sustainably designed Cider Suites or the three-bedroom Cottages. Prices start from $245 per room, with a minimum two-night stay required on weekends. Continental brekky is included and you can wine and dine gourmet-style at the onsite Sisters Rock restaurant. See borrodell.com.au 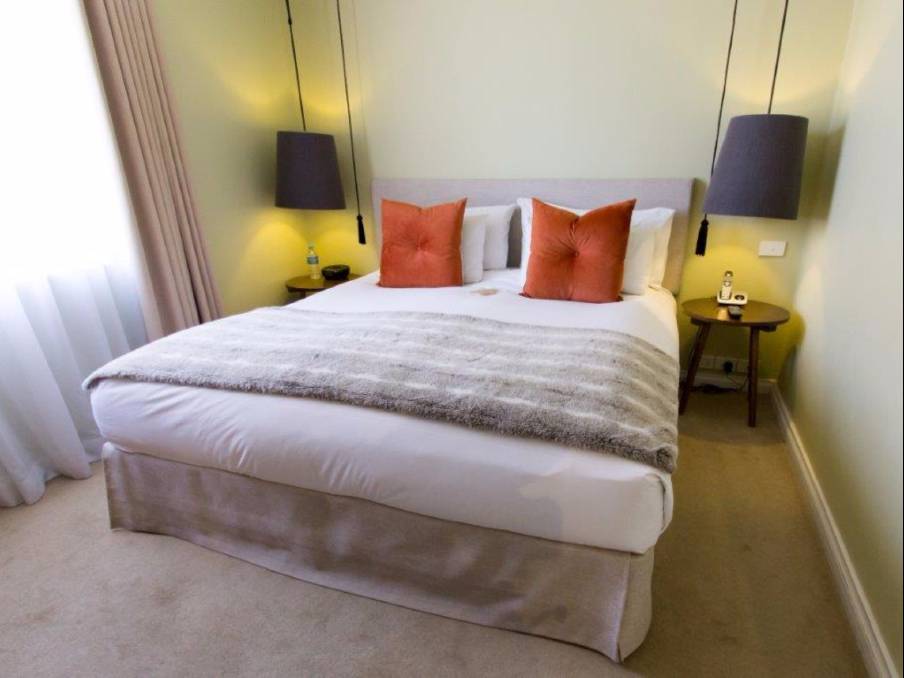 Settle in at De Russie.

Located in town, this multi-awarded small hotel offers the convenience of a five-minute walk to restaurants and cafes. The value-for-money rooms combine in-town chic with elegance and include a breakfast bag. De Russie has 25 boutique rooms, including spa suites and two- to three-bedroom suites. Prices start from $199 per night on weekends. See derussiehotels.com.au

Drive: From Sydney, it's an almost four-hour drive to Orange, west of the Blue Mountains.

Fly: Regional Express operates daily flights direct from Sydney to Orange from about $430 return. From Melbourne, one-way fares with Fly Corporate start at about $220.

Train: The combined train and coach journey takes about five hours from Central station to Orange (on the Western Sydney to Dubbo line). Fares from $34 return. Passengers change at Lithgow or Bathurst for a coach service to Orange. See transportnsw.info