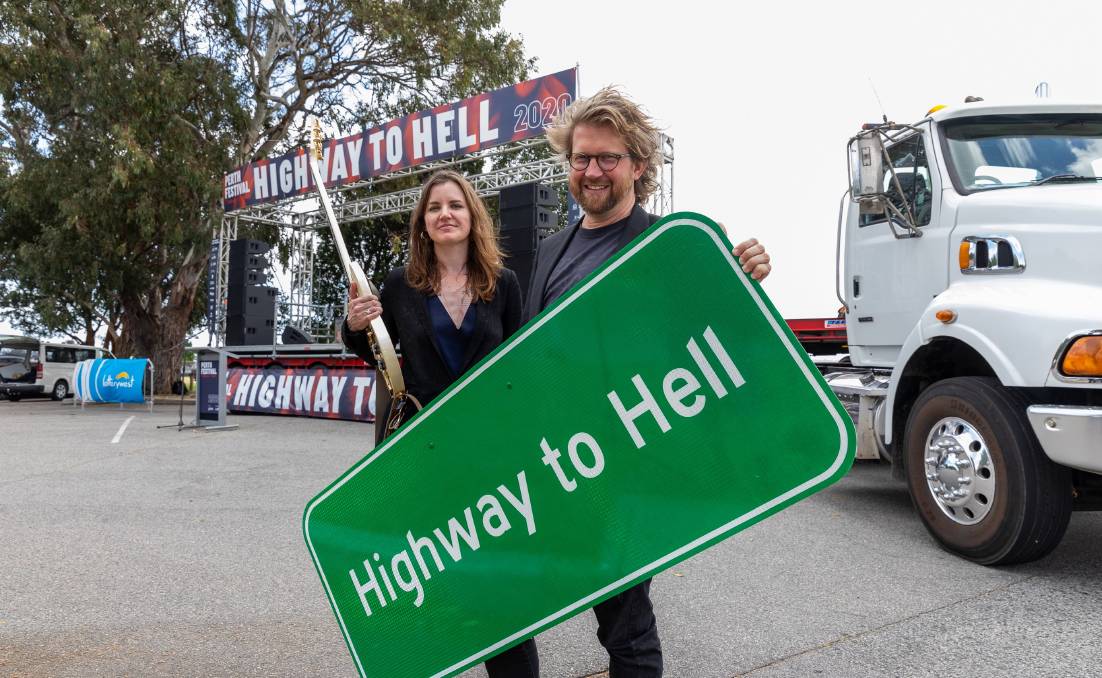 Highway to Hell is set to be an epic final event for the 2020 Perth Festival. Photograph by Cam Campbell.

A major highway in Perth will be shut down for a tribute to AC/DC and the legendary Bon Scott.

IT'S building as one of those once-in-a-lifetime events.

One of those things that in years to come, people will still talk about the day when one a capital city's major highways was closed for a festival for an entire afternoon and evening.

So, you may ask, what sort of event could warrant approval being granted for Perth's Canning Highway, one of the major arterial roads of the city's southern suburbs, and one block of most side streets on either side?

Surely it would have to be pretty major.

Well, as a matter of fact, it's to celebrate the life of international rock legend, AC/DC's original front man Bon Scott and his connection to Perth, while also marking the 40th anniversary of his death.

Born in Scotland, Scott spent much of his youth in and around Fremantle, and was also laid to rest at Fremantle Cemetery following his death in London in 1980.

Given the significance of the anniversary, Perth Festival artistic director Iain Grandage thought a free, family-friendly event involving more than 100 acts and inspired by the occasion would be a fitting way to close out the 2020 Perth Festival.

He took inspiration from the AC/DC song Highway to Hell, which Scott is reported to have written about Canning Highway, and put in motion plans to in fact turn the roadway between the Canning and Fremantle Traffic bridges into the world's longest stage for an afternoon.

"For years, Bon walked this iconic southern stretch of Canning Highway from the Leopold Hotel in Palmyra to Fremantle, and AC/DC lit up the Raffles Hotel with legendary gigs," Mr Grandage said.

"Now we're closing the highway, all 10 kilometres of it, for one special day designed for families and fans alike."

That day is Sunday March 1, which falls on the Labour Day long weekend, but also happens to be the exact anniversary of Scott's ashes being buried 40 years ago.

Highway to Hell is presented by Perth Festival in partnership with the City of Melville, City of Fremantle, and Town of East Fremantle, and supported by the State government through Lotterywest, Tourism WA and other agencies.

Mr Grandage said when he took over the artistic director position for the festival, one of his first hopes was that he'd be able to put on events that would speak to a lot of people. 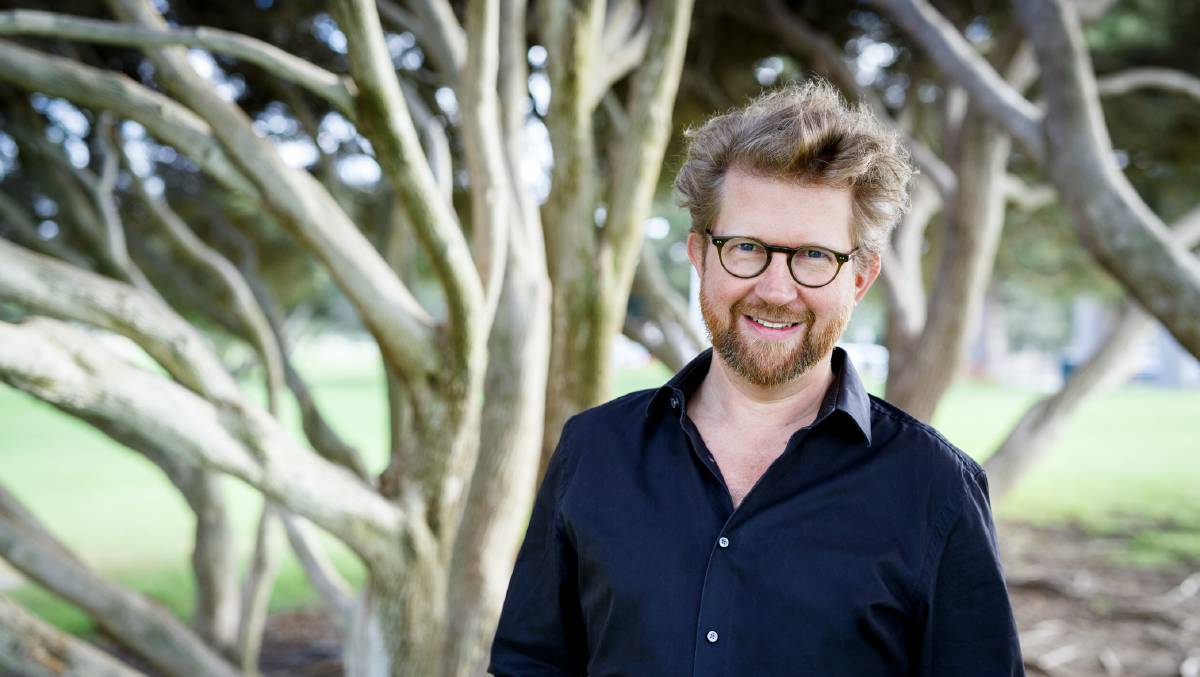 And he is confident that Highway to Hell will do just that - in fact, he believes it is a once-in-a-generation opportunity for residents and visitors to participate in.

"Unlike my predecessors, I am the first festival director to actually hail from WA, which means I had a youth filled with memories around Perth, and being a south-side resident, of regularly driving along Canning Highway," Mr Grandage said.

"As I got older I went out into regional WA and went to lots of B&S (Bachelor and Spinsters) balls, as well as many weddings and parties in the South West, and then through work spent a lot of time in the Kimberley, collaborating with indigenous artists."

And it is that experience of being in regional WA for many social occasions that provides some of the inspiration for this event, which Mr Grandage believes will feel more like a party with everyone getting together to celebrate Scott's life, while demonstrating just how life in WA influenced his life.

"It's not necessarily targeted at people from Fremantle, Melville and surrounds, or just AC/DC fans, it's an event for anyone to come along and enjoy," he said.

"I just love the idea of taking over a road, and denying any cars on it - we're all so reliant on cars in this city and I love that this is so different."

Not surprisingly, planning has been underway for well over a year, as the event will stretch through three councils along the 10km route, in which over 100,000 people live, and will affect 110 intersecting roads.

"It's a big logistical issue to shut a highway, so we started early to give it a chance of bringing it to life," he said.

This was one of the reasons why it was unlikely to happen again, due to the huge logistics involved in putting on such an event.

Canning Highway will be closed to vehicles from 1pm and people will be invited to set up a picnic anywhere along the lanes which normally carry east-bound traffic, or gather at one of the four special activity and entertainment areas - the Canning Bridge zone in Applecross, the Tompkins Park Zone in Alfred Cove, the Valley Zone in Palmyra and the Rainbow Zone in East Fremantle and Fremantle.

Roving performers, community choirs, food and market stalls will operate at Tompkins Park and the other key zones from 4pm.

The main feature of the event will be bands being transported by a convoy of trucks driving down a closed Canning Highway. Photograph by Cam Campbell.

Then at 5pm, a diverse range of local and international acts will perform AC/DC songs from stages on the back of semi-trailers in a slow 'hit parade' in the west-bound lanes from Applecross to Fremantle, ending at 8.30pm.

Artists on the trucks will range from Finnish bluegrass band Steve 'n' Seagulls and Japanese female rock trio Shonen Knife to Melbourne rock band Amyl and the Sniffers, and the Pigram Brothers from Broome.

Mr Grandage said the trucks would be travelling at 4km/h, at walking pace, so people could have plenty of time to watch the trucks pass each point along the highway.

"Although the centrepiece of the event will be the bands playing on the back of trucks as they make their way along the highway, there will be plenty of entertainment wherever people decide to set up camp," he said.

This would include community choirs, pipe bands in a nod to Scott's Scottish heritage, and mariachi groups, and a mass sing-along of Highway to Hell at Tompkins Park, where the free main stage acts will be The Jam Tarts, Dan Sultan and Moju Juju with the WAAPA Gospel Choir.

The public is also invited to take part in a world-record attempt on the most number of people playing the air guitar at the same time.

People will be able to find what appeals to them - for example, families will be better accommodated around Tompkins Park in Attadale, while the Valley Zone, near the Leopold Hotel which was Scott's old watering hole, will be more "hard and fast".

Mr Grandage hopes that no matter where people choose to set up along the highway on the day, every time they go past the spot they'll remember the event for years to come.

He also hopes it will engage the entire State, as was the case in 2015 when his predecessor Jonathon Holloway bought two huge street marionettes, The Giants, to the city in an event which captured the imagination of hundreds of thousands of people and is still spoken fondly about today.

"The Giants showed us how inclusive a festival can be, it was an amazing undertaking," he said.

Mr Grandage said there were perceptions in the past that Perth Festival was focused in and around the Perth CBD, which certainly was not the case here.

"We are moving a big event south of the river, which is quite tricky to navigate given the public transport is not necessarily used to carrying the volumes of people we're expecting," he said.

"But it's very special, because it reminds us that we're living in a big city with lots of stories within it.

"AC/DC was so huge, but it's not going to be purely rock and roll, it is absolutely going to be an event for everybody, a celebration of this place and people from this place, and everyone should feel welcome."

Mr Grandage said he couldn't thank members of the festival enough who had embraced the concept from the start, ensuring the idea was "bigger than any individual" and a true community event.

He was also thrilled with the support the festival had received from the relevant councils, and government departments.

"We had to be prepared, and in the early months it was a lot of sounding out, because the logistics are so massive that it's more than just preparing music," he said.

"Everyone we approached, their eyes lit up and basically said the idea was insane but they loved it."

Mr Grandage said he hoped the long weekend would enable more people from regional WA to travel to the city to enjoy the event.

For people who don't live close to the highway, or have friends or family who do, there would be plenty of public transport options available to get them to and from the event.

Parking would also be available at Murdoch University, and shuttle buses would operate from there.

As the time draws ever closer, Mr Grandage said he couldn't wait to see how it all unfolded.

"Everyone is invited, and as Bon Scott sings in the song that inspired this event, "all my friends are gonna be there too."