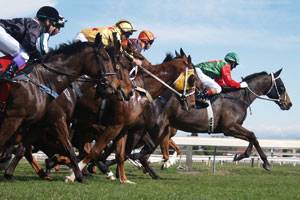 A NSW trainer and his stablehand are facing lengthy bans from the racing industry after pleading guilty to disposing of a horse at a knackery in 2018.

Ian Symons, from Quirindi, accepted an 18-month ban from racing after he sent retired racehorse Snippet Assured to a knackery to be slaughtered.

A NSW Racing steward's report stated that, when Symons made the decision to retire the horse in August 2018, he opted for disposal instead of rehoming the horse.

This was in contravention of a rule brought in by Racing NSW in 2017 which forbids racehorses being sent to slaughter.

After pleading guilty, Symons' ban was reduced from two years to 18 months.

"Taking into account all the circumstances and considering matters of mitigation to give regard to Mr Symons' frankness and guilty plea, the original period of disqualification was reduced from two years to a period of 18 months, to expire 15th July 2021," the report stated.

"Mr Symons was advised that whilst that disqualification had immediate effect, he would be allowed seven days to make satisfactory arrangements for the transport and general wellbeing of horses in his care.

"However, he would not be allowed to race any horses in this time."

Symons' stable hand Rachel Wotzlaw was issued with a four-month ban for conduct detrimental to the interests of racing.

Wotzlaw pleaded guilty to providing information on October 8, 2018, to lessees of the racehorse stating it had been rehomed in retirement, although she knew it had not.

The report stated Wotzlaw communicated with the lessees of Snippet Assured via Facebook Messenger.

"Taking into account all the circumstances and applying due mitigation to give regard to Ms Wotzlaw's frankness and guilty plea, the original period of disqualification was reduced from six months to a period of four months to commence immediately and expire May 15 2020," the report stated.

The bans come after an October 2019 ABC 7.30 expose revealed many registered racehorses were being sent to slaughter in NSW after retirement.

The story Trainer banned for 18 months after racehorse slaughtered first appeared on The Northern Daily Leader.