What is happening to help wildlife injured by the fires... 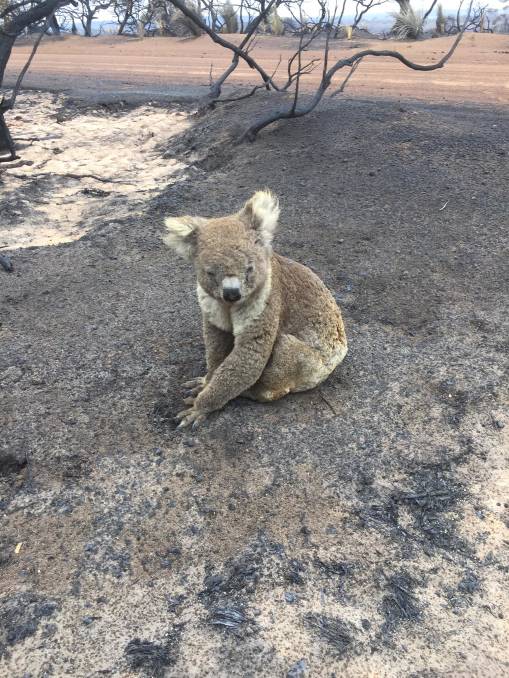 Kangaroo Island is rallying to try and help its wildlife after a third of the Island, including its most pristine wilderness areas, was burned in the Ravine fire, much of it scorched to bare earth.

Residents on the western end in locations such a Karatta report there is little or no vegetation and the ground is littered with many, many thousands of dead kangaroos, wallabies, koalas, possums and other wildlife.

Efforts are being made to save as many animals and fundraising has begun.

A central point is the Kangaroo Island Wildlife Park at Pardnana at the edge of the fire ground, run by Sam and Dana Mitchell.

They have started a GoFundMe page for to aid the wildlife rescue effort: Help save Kangaroo Islands Koalas and wildlife that has already raised an amazing $340,000. 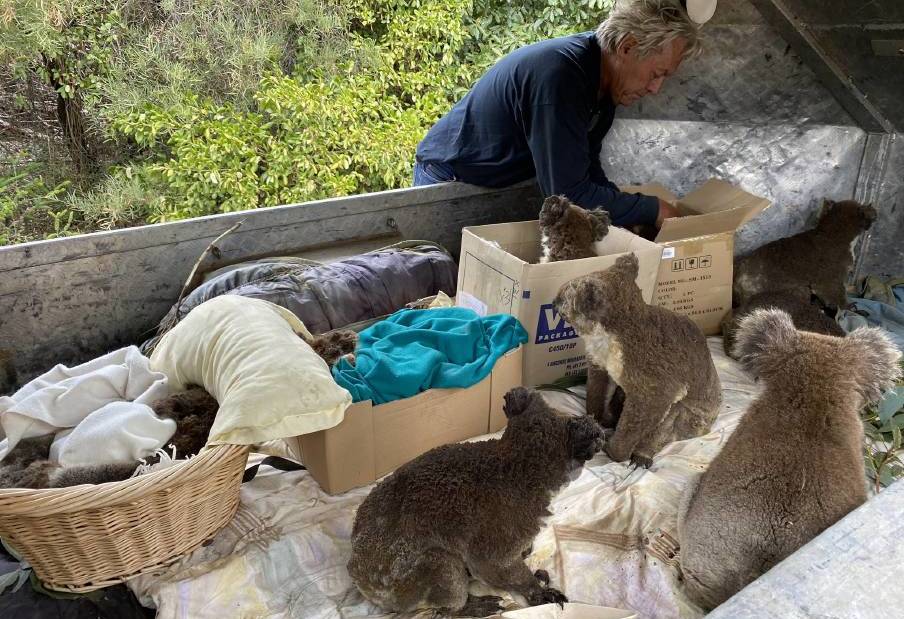 He was expecting a team to arrive from Sydney soon to help build a temporary animal hospital and enclosure, and the park now had sufficient medical supplied and feed.

"This is going to take a year, eventually we will need to find habitat for the animals we rescue," he said.

"South Australian Veterinary Emergency Management (SAVEM) are directing any native wildlife to us. Kate Welz from Kangaroo Island Wildlife Network (KIWN) is working along side us but the best number to call is the wildlife park. We are the operating base for natives and have seen over 50 koalas."

The KI Wildlife Park reported on Sunday that: "Today we have seen over a dozen koalas come through our doors needed urgent care! 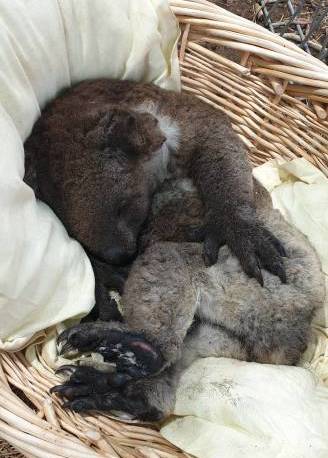 "Sadly some had passed away in transit, others were so severely burnt we were unable to save them but the many that we have high hopes for have been treated for burns, given pain relief and antibiotics and rehydrated.

"Many are already already looking brighter and all are eating. They were extremely hungry after days of no food in sight after their homes burnt down. Thank you everyone for your support during these heartbreaking times."

Efforts are also being undertaken individually, including Islander Mark Russell who organised a bale of hay to be taken out to the fire ground for the impacted wildlife.

"We planning to do it in couple days when things get cleared up a bit. Don't want to get in way of cleanup yet," Mr Russell said. "Our friend Alex Buick offered the bale. He is an 81-year-old local well known and loved by many."

Mr Russell visited his block at Karatta on Saturday, the day after the fire, and fortunately his shed was still standing, here is his account:

"We managed to go out to our block this arvo to survey damage and check for wildlife for rescue," he posted. 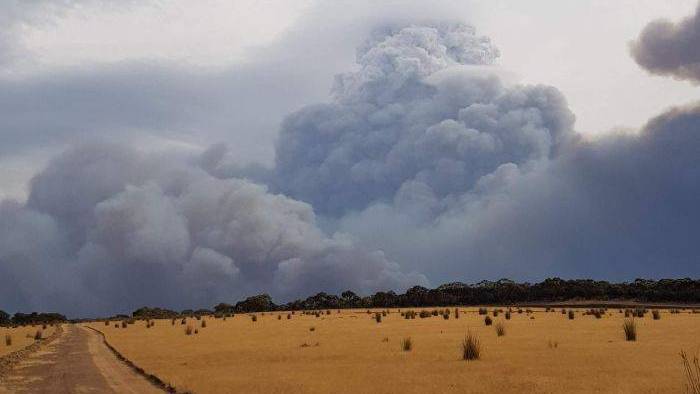 The fire at its height over Karatta. Photo Island Beehive

"The full length of our road was burnt and black as far as the eye could see. Heading closer to our gate we didn't hold much hope for our shed. At our driveway we could see amongst all the black a blue shed.

"The whole 350 acres is burnt. While we were there we heard a few big trees come crashing down in creek area as they're still smouldering.

"We did rescue three koalas and a kangaroo, which we took back to the wildlife park. The amount of dead wildlife we saw was, well, no words .

"Hundreds and hundreds of dead koalas, wallabies, kangaroos and possums. Some dead pigs too. There won't be a pig problem over here any more wouldn't think.

"Can't remember how many animals we euthanised along the way. In one spot along our road we stopped and I counted 87 dead animals in close range of our car."

Local KI charity Island Care is also rallying with as many as 30 locals making pouches and other items for injured wildlife. The KI Wildlife Park GoFund Me page starts out: "Due to the recent tragic bushfires, the Kangaroo Island Wildlife Park has received a lot of concerned phone calls and messages regarding the impacted wildlife from these fires.Over the past few days we have started to see a large number of injured koalas, along with other native species heavily impacted by this event. We have been treating these victims as best we can to supply pain relief, antibiotics, treatment to wounds and basic husbandry requirements. We spent most of January 3rd building extra holding enclosures as well as defending the park from the immediate threat of the fire.

We will continue to prepare more infrastructure to house the extra wildlife we expect to see over the coming weeks.For those of you who would like to contribute we are asking for funds to help with veterinary costs, koala milk and supplements, extra holding/rehabilitation enclosures, as well as setting up a building to hold supplies to treat these animals.

We are working around the clock with a highly experienced, qualified and dedicated team of volunteers including qualified vets, vet nurses and wildlife carers to rescue, rehabilitate and care for all of the animals coming in from the bushfires.On admittance to us, all efforts are made to rehydrate, treat and assess the wildlife by our vet care team. Many are being treated for severe burns with most burns being to their hands, feet and rumps.

We will continue to provide the best care possible for our injured wildlife, we expect due to significant habitat loss we will be building exhibits to hold the treated koalas until we can arrange release back into the wild for many of them.Kangaroo Island is well known for its thriving koala population however over 150,000 hectares has been lost due to recent events, this will effect our koala population dramatically.

We need to pull together to save this Australian icon.Once conditions improve and we are granted access to fire ground, a qualified team will be going out to rescue wildlife caught in the fires and relocate those left without a food source or home.We will provide regular updates on the wildlife in our care, their progress and more. Thank you to everyone for your support through these trying times."

Koalas and other wildlife affected by bushfires on Kangaroo Island must be managed locally and not removed from the island.

Department for Environment and Water bushfire recovery coordinator Brenton Grear said it was particularly important that the island's koalas - which make up the only population in South Australia free of chlamydia - remain disease-free.

"We've received reports that some koalas from Kangaroo Island have been taken to Adelaide by people who want to get help for them," he said.

"It's understandable and heartening that people want to rescue these animals, but unfortunately it will mean that those koalas can't be returned to the island because of the risk of contamination of the population there."

Chlamydia in koalas can cause blindness, bladder inflammation, infertility and death. As the island's koalas are isolated and free of the disease, its introduction would devastate the population.

Because of the size of the fires burning on the island, it is too soon to know how many animals have been affected.

"South Australian Veterinary Emergency Management (SAVEM) has been activated to manage the wildlife rescue effort and is working with other groups in fire-affected regions," Mr Grear said.

"We ask that anyone on Kangaroo Island who finds injured wildlife call SAVEM on 0477 055 233 or email info@savem.org.au

"The work of wildlife rescue volunteers across the state is greatly appreciated, and SAVEM will coordinate assistance for animals affected by the fires on Kangaroo Island."

The story Kangaroo Island rallies to save wildlife among bushfire devastation first appeared on The Islander.