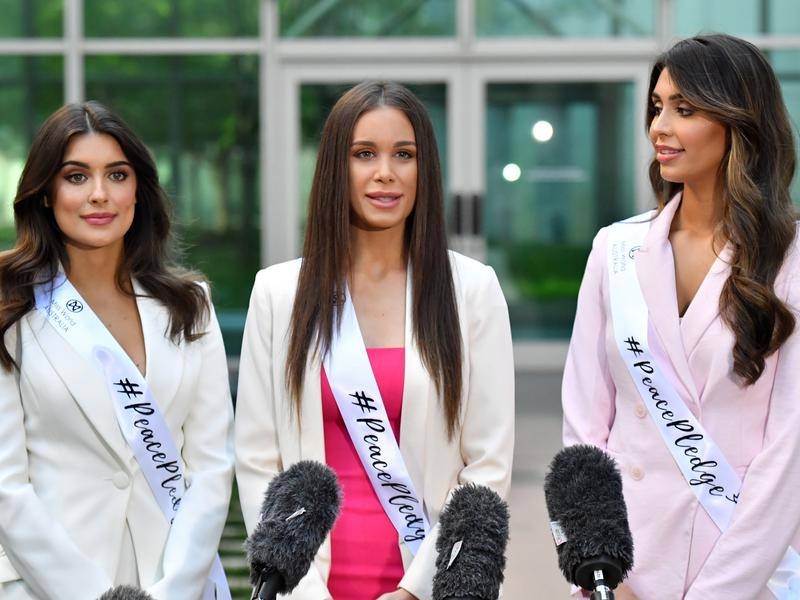 Esma Voloder knows it sounds like a cliche for a beauty queen to call for world peace, but the Miss World Australia winner says peace is a serious issue. She,...

Esma Voloder knows it sounds like a cliche for a beauty queen to call for world peace, but the Miss World Australia winner says peace is a serious issue.

She, as well as two other Miss World Australia contestants, are in Canberra to help World Vision call for world peace and $93 million boost to Australia's foreign aid budget.

The 2017 Miss World Australia, born in a refugee camp when her parents fled the Bosnian War in the 90s, said while her family was fortunate, others displaced by conflict weren't.

"(They're) in some of the most emotionally distressing and physically challenging situations you can think of," Ms Voloder told reporters at Parliament House on Thursday.

World Vision is also calling on punters to make a 'Peace Pledge', like taking a stand against racism or simply just getting to know your neighbour.

Spokeswoman Caelin Briggs says the group had several meetings lined up with MPs at parliament on Thursday.

"In order to become a top 10 donor, Australia would need to commit at least $93 million in dedicated funding to conflict resolution," Ms Briggs said.

She said it was an achievable amount, especially next to the nation's defence budget, and she even hoped to see the defence force give some of its own budget to help conflict resolution.

Australia is currently 13th when it came to the list of countries spending on conflict resolution, with Germany at number one.