The report has found the number of people in WA seeking help from homelessness services is on the rise, with the biggest increase among seniors, particularly women.

Thousands of elderly West Australians are just one rent increase from disaster.

A STAGGERING 12,000 plus older Western Australians are in housing stress - paying more than 30 per cent of their income in rent.

More than 4000 are in extreme housing stress, on the lowest 20 per cent of incomes and paying more than half their income in rent.

Many of those in extreme housing stress (35 per cent or 1,534 people) are aged over 75. They are struggling to pay their rent, pay bills and buy food. They are in imminent risk of eviction, debt and food deprivation and at increased risk of illness, disability and premature entry into residential aged care.

The data features in a new report One rent increase from disaster by the Housing for the Aged Action Group and the University of Adelaide, funded by The Wicking Trust. 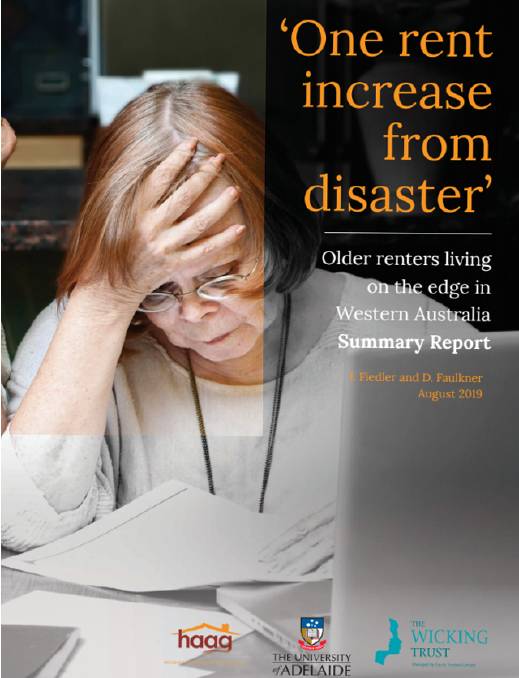 It's the latest in a series of reports looking at the housing issues affecting older Australians around the country to highlight the problems of housing cost and security and to investigate long-term solutions.

A further 1186 over 55-year-olds are marginally housed in boarding houses, caravan parks, hotels and other temporary dwellings. The majority of these people are in lone person households and 61 per cent are women.

I am 71 years old single female, retired seven years, in good health and living in private rental accommodation. My stress is caused by not having security of tenure, always wondering whether I will have to move again at the end of the lease because the rent has increased too much, or the property has changed owner and not available for rent any more. - Focus group participant

According to the report the housing circumstances of older people in WA have deteriorated over recent years with a spike in the number of older people in WA without secure housing, and those aged 65-74 experiencing the greatest percentage rise. This is occurring as the overall rate of homelessness in the state appears to be declining.

The number of people seeking help from homelessness services has also increased with the biggest rise among seniors, particularly women.

However as those facing homelessness for the first time in later life do not readily access services, there is a hidden population of older low income households struggling in the rental market in WA, says the report.

I know that the next time my lease comes up for renewal my landlord will put the rent up and I shall have to try and find somewhere else to live. He wanted to put it up last time but I managed to persuade him to leave it for another 12 months. - Focus group participant aged in their 70s.

Just over 12 per cent of the older population in WA are renters with 62 per cent in the private rental market.

"The private rental market is unsuitable for older people as it is too expensive for those reliant on a government payment such as the aged pension or Newstart Allowance, it provides limited security of tenure, there are few standards governing the condition of the housing and the housing is not adaptable as people age," says the report.

Older people in housing stress live in both Greater Perth including areas such as Rockingham, Mandurah, Bentley-Wilson-St James and Perth City and in regional WA particularly in the heavily populated areas of Bunbury, Albany, Augusta-Margaret River-Busselton, the mid west and the Kimberley.

"Moving to a regional centre in terms of finding affordable housing is not the answer as just one per cent of rental properties outside of Greater Perth available in 2019 could be considered affordable for older single households," says the report.

The 2018 Rental Affordability Index showed that a single pensioner in Perth or regional WA would need to spend around 64 per cent of their income just on rent.

The report highlights the need for Federal and State Governments to invest more in affordable housing for older people on low incomes and on improvements to housing information and support systems.

"Many older people are seeking quite straight-forward housing solutions so they can just get on with their active lives. They just need a basic one or two bedroom place, security of tenure, affordable rent and a home that's designed for their needs as they age.

"This research has identified that there are a wide range of housing options available to older people that are provided by many organisations across the public, community, aged care, charitable and local government sectors-however, accessing these housing options requires significant research and navigation skills.

"This is difficult enough to do when a person has the time, resources, computer knowledge and the ability to search for such housing but almost impossible if an older person is under the pressure of being threatened with eviction."

I have always been the kind of person who can cope. I'm worried now though as I'm getting older and I don't know what the future holds and it would be the death of me if I became homeless as my health isn't the best. My friends told me that I'll be waiting forever for public housing so I started searching on the internet and was surprised to come across organisations in my area that have small blocks of affordable housing. I've put in an application and hope to hear from them soon. I never knew these places existed and I feel lucky that I have found them. - Focus group participant

Among the report's recommendations are:

READ MORE: Older women don't have 'the look' for work