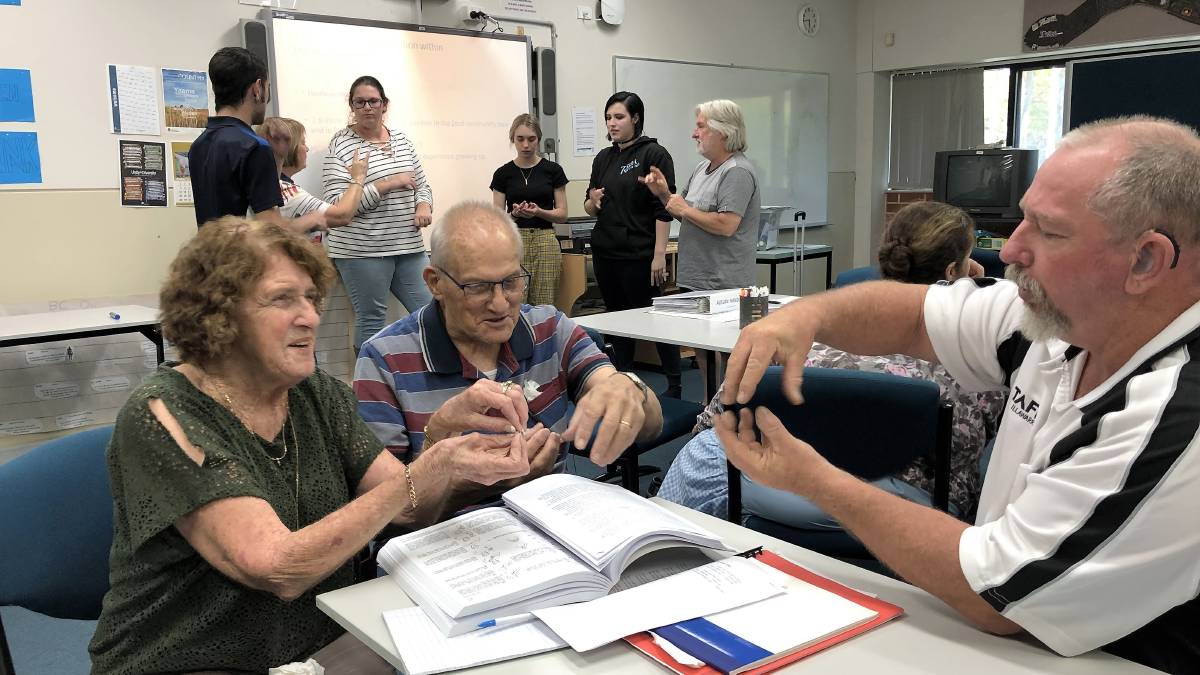 THEY may be in their 80s, but that hasn't stopped Shoalhaven couple Bill and Wilga Casey out of the classroom.

The couple from Sanctuary Point on the NSW south coast are both studying Auslan (Australian Sign Language) at TAFE, inspired by their son.

The pair enrolled in Certificate II Auslan at TAFE NSW Nowra to help them communicate with their son. He started losing his hearing when he was seven and is now completely deaf. An estimated one in six Australians live with hearing loss.

"Our son can still speak and lip read but he also signs, it would be far easier for him to have a conversation with us if we knew Auslan," said Mrs Casey.

"The course has been very interesting and Robert makes sure everyone in the class understands each step before moving on," said Mrs Casey.

Mr Leeson was born deaf and despite wanting to work outdoors found himself teaching Auslan 23 years ago.

In 1982, Auslan was recognised as a community language, and from then Mr Leeson said "people started to notice deaf people because they could see us communicating".

"Deaf people are invisible members of the community until they start to sign. I think people saw how nice signing looked and it became a skill they wanted to learn," Mr Leeson said.

He has noticed a growing interest in the language's popularity as an additional skill for those working with children and in the growing care and disabilities sectors, providing direct support for deaf people who use Auslan.

Mr Leeson said learning Auslan as a language took about the same amount of time and commitment as learning any other language.

To ensure his students get real practical skills and experience he takes them on excursions to gain a better insight into life without being able to hear or speak.

"I take the students shopping for groceries, but they can only use Auslan to communicate," Mr Leeson said.

"I try to make the class fun and have a lot of activities and role play for the students throughout the year.

"Auslan isn't only for people who are deaf, it's a useful skill for people who need to communicate without using their voice. One of my students is a man from Ulladulla who lost the use of his voice box following surgery."

For more information about studying at TAFE NSW, phone 13 16 01 or visit www.tafensw.edu.au

Have you signed up to The Senior's e-newsletters? Register below to make sure you keep up to date with everything that's happening for seniors around the country.