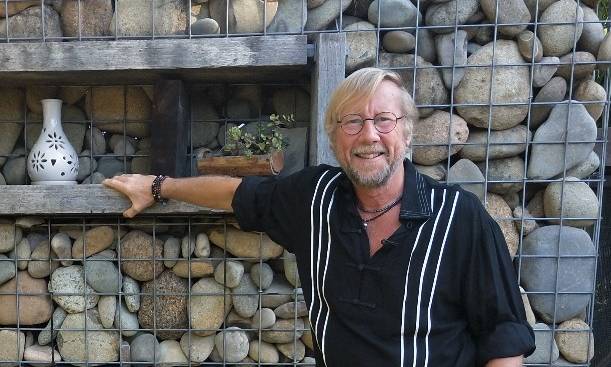 TRUST YOUR INSTINCTS: Andrew Church, who is living with terminal stage four cancer says 'listen to your body' and know the symptoms of bowel cancer.

IF YOU'RE reading this story, you're already taking positive steps towards minimising your risk of bowel cancer.

That's the opinion of NSW Central Coast businessman, chef, author and local historian Andrew Church who was diagnosed with stage three bowel cancer in 2016, the day after being named Gosford Citizen of the Year.

"My advice is to listen to the ads, read the articles like this one about bowel cancer. If I had, I would have asked for tests earlier and may not be in the position I'm in now," said Andrew, 58.

Bowel cancer claims the lives of around 100 Aussies every week, but is one of the most treatable types of cancer if found early.

Andrew - the man behind the Central Coast Interactive War Exhibit and author of several cookbooks - had to undergo radical surgery, which involved removing his rectum and part of his colon in a bid to fight the disease. 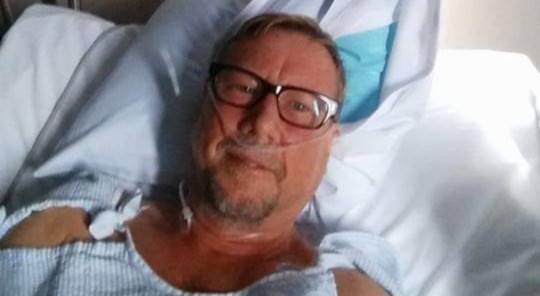 JOURNEY: Andrew in Gosford Hospital in 2016 after an operation to remove part of his bowel. He's now writing a book about his cancer recovery.

Then during a routine scan in 2017, doctors discovered six tumours on his lungs. "Doctors told me they were inoperable and untreatable and that intense palliative chemo (with no hope of cure) was my only option under conventional medicine," said Andrew.

"I'm now living with terminal stage four cancer. If they had done the tests five years earlier I may not be in this position."

His advice, this Bowel Cancer Awareness Month, is to trust your instincts and know your body.

"I was presenting with the classic symptoms for two years. I was getting puffed just walking up a flight of stairs, I had high insulin, low iron and had cramps in the stomach and was bleeding when I went to the toilet," said Andrew.

Doctors said he was run down and put it down to irritable bowel syndrome, age and haemmarroids. "I should have known."

Despite being told four months ago by doctors that he had less than 12 months to live, the father of three remains remarkably positive.

At his last check-up doctors discovered that his tumours, which had doubled three times since they were discovered, had stopped growing.

He puts this down to positive thinking and leading what he calls "an extreme" healthy diet and lifestyle.

Some people says it's luck, it's lifestyle, it's outlook. But you've just got to stay positive. It's about eliminating the negative.

This, he admits, has been his biggest challenge.

"It's not always positive. For the first little while I was dealing with it, it was a huge emotional stress on me and my family.

"But since I've started to take action; exercise right, eat right and stopped working all of the stress has gone."

As a successful businessman he said one of the hardest things was having to sell his museum, including of his priceless collection of war memorabilia.

"That was a challenge. It was a passion and my life collection - that was tough stuff. But I didn't have a choice."

But he said as one door closed another opened, and he has written several songs including one called Win This War about beating cancer and produced a coffee table book called Quotes, Meanderings and Antidotes.

Next up he's penning a book called Stage Four: Knocking At My Door about the steps he has taken in his personal bid to beat cancer. "It's not about a cure, but more an inspirational lesson in what I am doing."

He's also become involved in bowel cancer support groups and is a in a metastic lung cancer group on social media.

"Emotionally I'll never be the same because of what I've been through. But I am convinced I'm going to beat this, or that the tumours will shrink at least. My goal is to stop the tumours growing and right now I feel like that's working," he said.

Bowel cancer, also known as colorectal cancer or colon cancer, is cancer in any part of the colon or rectum.

Common symptoms of bowel cancer can include:

Not everyone experiences symptoms, particularly in the early stages of bowel cancer. The above symptoms may be suggestive of bowel cancer, but they can also be due to other medical conditions, some foods or medicines.

Don't delay in talking to your GP is you are experiencing any of the described symptoms for two weeks or more, because when diagnosed early 90 percent of cases can be successfully treated.

Blood in the stool or rectal bleeding should never be ignored.

Read more: Bowel cancer: Don't wait until it's too late