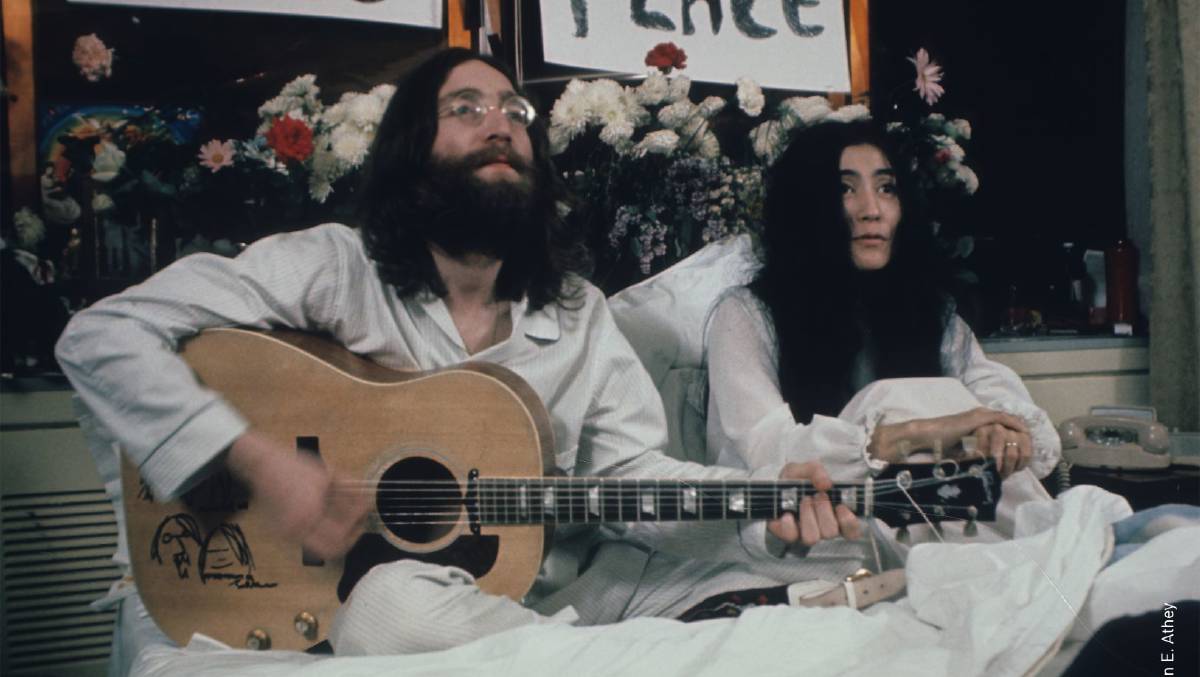 SHEET MUSIC: John Lennon and Yoko Ono during their Montreal Bed-in. The pair had planned to make the anti-war protest (it was their second - the first took place in Amsterdam a few months earlier) in New York but Lennon was not allowed into the US because of his 1968 cannabis conviction.

IT is 50 years since the Queen Elizabeth hotel in Montreal, Canada, welcomed John Lennon and Yoko Ono for their Bed-in for Peace. Nobody could imagine at the time that this event would play such a key role in the peace movement and that their suite would become almost a shrine.

To mark the event's 50th anniversary, the hotel is inviting guests to relive the week the couple composed and recorded the anthem Give Peace a Chance without leaving their bed. Among the rotating cast of celebrity visitors who sang along were counter-culture icons Allen Ginsberg and Timothy Leary and civil rights campaigner Dick Gregory.

From May 25-October 9, a special exhibition of photographs from the late Gerry Deiter will be shown in the hotel's lobby. On assignment for LIFE magazine, Deiter was the only photojournalist to cover the event in its entirety.

On May 25, from 11am-4pm, the hotel is organising guided tours of the couple's suite Tickets can be reserved online here.

That night from 10pm there will be a Peace & Love party where guests are invited to don their best hippie gear.

From May 26-June 2, the Bed-in projection from Cite Memoire will be presented every 30 minutes in the lobby's agora. This historical tableau with soundtrack emphasises the anti-war movement of the late '60s.

On May 30, a concert for the 50th anniversary of the Bed-in will be presented on the top floor of the hotel.

Those wishing to have their own Bed-in experience can reserve the 50th Anniversary Bed-in Package, which includes accommodation in Suite 1742; breakfast at Roselys restaurant or in room; two pairs of white pyjamas; calligraphed lyrics of Give Peace a Chance; a booklet of photos; white flowers; a commemorative collector's item; a welcome treat and a $100 donation to Amnesty Internationale Canada. The package is available year-round at the cost of $2999, double occupancy.

All guests staying at the hotel from May 26 through the northern autumn will receive a commemorative magnetic room key.