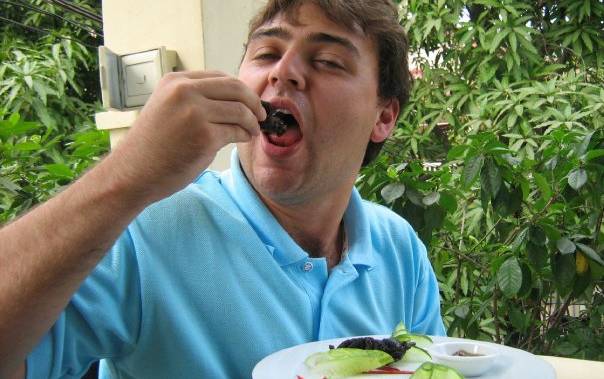 Fried spider with garlic, anyone?

Fried spiders and crickets could be on a menu near you very soon.

WOULD you try crickets for tea?

Insects could be on the menu in the near future thanks to their high protein content - though many people haven't warmed to the idea of creepy-crawlies on the tongue.

But new research has found if you like sushi, chances are a side of deep-fried crickets won't bug you too much.

"Until relatively recently, the idea of trying sushi - let alone having it become a mainstream menu item - was often thought of with disgust in many societies," said Matthew Ruby, the study's co-author from La Trobe University.

"It appears the more open you are to exotic foods, the more willing you'll be to taste test a grasshopper, or an ant, or even a spider."

Dr Ruby said sushi could be a gateway to insects in western diets. "Just like sushi, eating insects will take some getting used to."

But if the thought of crunching into a whole bug really turns you off, there could be other ways to reap the benefits, without the ick factor.

"Insect flour can be found as a protein-rich substitute for some standard grain flours in products like crackers, biscuits and protein bars," said Professor Paul Rozin, the study's co-author from America's University of Pennsylvania.

Insects have been eaten world-wide for centuries, though are not common in Western diets.

There are more than 2000 edible species of insects throughout the world. Many are non-toxic and can serve as a source of high-quality protein and micro-nutrients.

Raising insects for food is much more environmentally sustainable than many commonly consumed animals because they use less water, farming space and produce less greenhouse gas emissions.