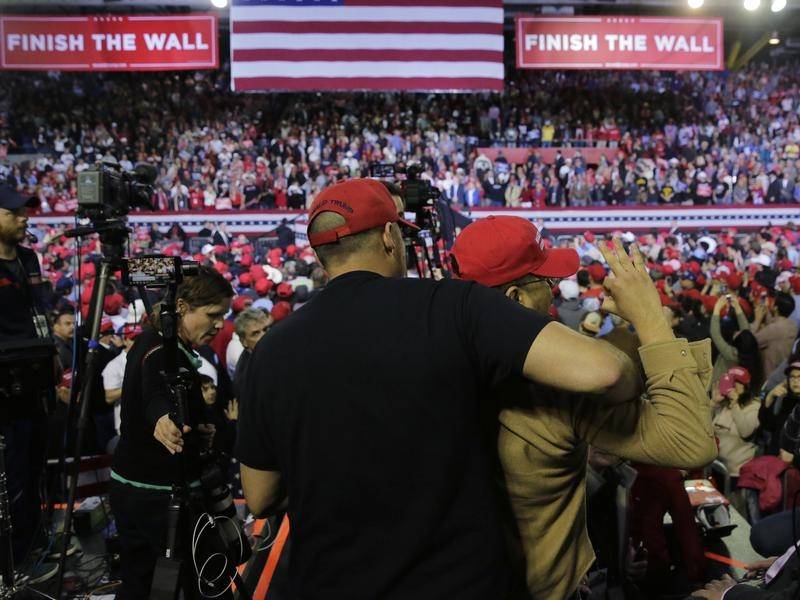 A man is restrained after he began shoving members of the media during the Trump rally at El Paso.

A BBC cameraman, assaulted during a speech by US President Donald Trump, was the victim of an "incredibly violent attack", it has been claimed. Washington cor...

A BBC cameraman, assaulted during a speech by US President Donald Trump, was the victim of an "incredibly violent attack", it has been claimed.

Washington correspondent Gary O'Donoghue, who is blind, said his colleague Ron Skeans had been filming a rally in El Paso, Texas, when the incident happened.

Describing what unfolded, he said a supporter of Mr Trump got on to the reporters' platform, and pushed the camera into his colleague, before continuing to push Mr Skeans.

"It was an incredibly violent attack. Fortunately our cameraman is fine, he is made of stern stuff," Mr O'Donoghue told the Today programme.

Footage captured from Mr Skeans' camera was posted to Twitter by Mr O'Donoghue and shows the shot focused on Mr Trump before jolting away.

As the camera appears to visibly bounce around for about 10 seconds, the screen then focuses on a man in a red cap who is being restrained by another man in a black t-shirt.

"This is a constant feature of these rallies - a goading of the crowds against the media," Mr O'Donoghue added.

"I have been spat at before, they hurl abuse at American colleagues in particular."

Mr O'Donoghue said Mr Trump's 2020 election campaign, which he thinks has begun, will be as "hostile and ill-tempered and divisive as the one we saw last time".