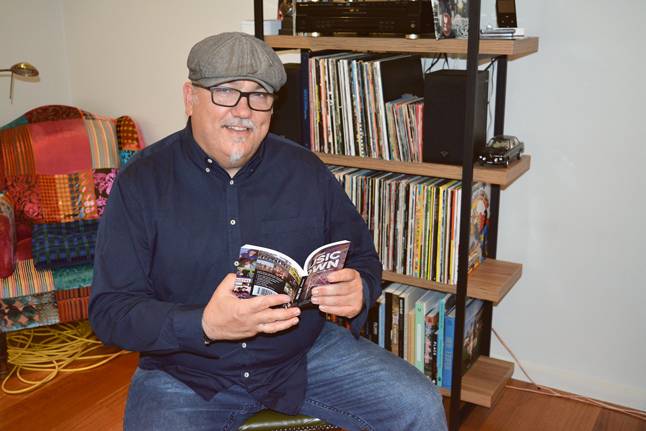 'VIBRANT SCENE ON OUR DOORSTEP' - Simon Wooldridge is a huge fan of the Bendigo music scene.

BENDIGO'S vibrant live music scene draws a host of artists and bands - many local, and plenty from further afield.

BENDIGO'S vibrant live music scene draws a host of artists and bands - many local, and plenty from further afield.

There has been a resurgence of live music over the past five years, thanks in no small part to the annual Blues and Roots Festival.

Live music has also thrived as more venues have popped up. Gigs draw crowds of all ages, including a swag of seniors.

"On any given weekend Bendigonians can see rock, blues, folk, metal, rock 'n' roll, country covers bands and more, at a dozen or more venues across the city - and not just on weekends," said Simon Wooldridge, co-publisher with Chelsea Koetsveld of a recently released book, The Best of Bendigo - Music Town.

The book is a celebration of Bendigo's rich and diverse music culture, featuring more than 120 bands - many home-grown, and others from elsewhere - that have a connection with the city.

There are profiles, hundreds of photos, festivals, fans' stories and venues. It's an entertaining and fascinating read for music fans anywhere, and particularly those who know and love the Bendigo scene.

Simon is a business consultant and writer who describes himself as an "old-fart punk" who loves any guitar-based music. He frequents Bendigo music venues.

"Chelsea and I had a concept of showcasing out-of-the-ordinary things in Bendigo - stuff that doesn't get so much coverage locally," Simon said.

"Our first book was going to be about tattoos and piercing, and the music one second, but the music material turned out to be easier and quicker to pull together."

Known for his music columns in local media, Simon managed the six-month project, with Chelsea taking on the creative direction and design.

"Since 2014 there have been gigs in Bendigo most weekends in the year," Simon said.

"Typically around 12 or 15 venues will offer live music, and the quality here is very good - no question about that.

"The Blues and Roots Festival brings an estimated 20,000 people to town, and plenty of people go to venues through the year.

"Sometimes gigs are sold out; occasionally you might get one man and his dog show up.

"I'm not sure how many of us realise just how lucky we are to have this vibrant scene on our doorsteps."