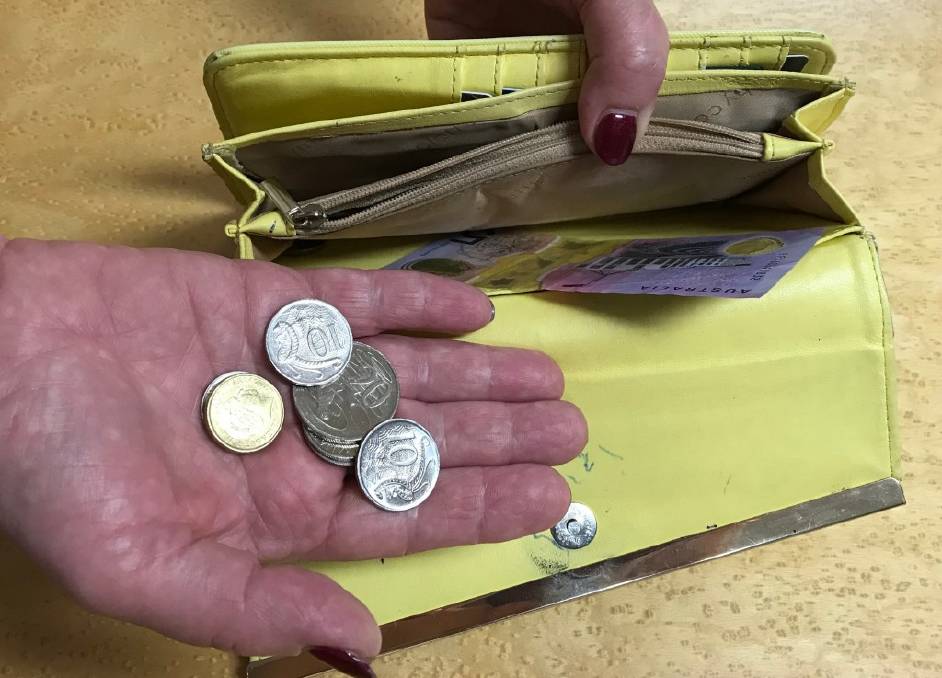 Over 50s on Newstart payments are struggling to make ends meet.

COULD you live on less than $300 a week? Perhaps you already are if you're one of the 250,000-plus over-50s currently unemployed and facing Buckley's chance of getting a job.

COULD you live on less than $300 a week? Perhaps you already are if you're one of the 250,000-plus over-50s currently unemployed and facing Buckley's chance of getting a job.

On your smidgeon over $40 a day as a single person on Newstart ($45 if you're over 60 and have been on the payment for nine months) you have to pay rent (or mortgage), food, power, medical expenses, car expenses and, of course, that smart outfit to wear to all the job interviews the 20-something graduate at the job provider office sends you to.

Then there's a phone to take the calls from employers eager to embrace your 30 to 40 years of work experience!

Thirty years ago you might have still lived in the hotel of mum and dad or bunked in with 10 mates. Not much chance of that when you're in your 50s or early 60s.

On the day this story was written, a search by The Senior on realestate.com.au revealed a mere 20 houses throughout Australia offered at a rent of $200 or less a week - and even that would give you only $100 to live on.

These days you might be on a few medications and even with a health care card they're costing you money you can ill afford.

You're not a bludger. You've worked steadily through the years. It's not your fault the company made you redundant. Or perhaps you spent 20-plus years raising the kids and now you're struggling to get back into the workforce.

It's estimated that 30 per cent of over-65s live in poverty.

There's also no question that most people on Newstart live in even greater poverty.

The Coalition has stubbornly refused to take a rise to age 70 off its policy platform which means today's unemployed people in their 50s could remain on woefully inadequate Newstart until they turn 70.

And if you were looking for some good news in last week's budget, you were out of luck.

Despite opposition politicians and welfare groups calling for a major overhaul of unemployment benefits, there was a deafening silence on the issue from treasurer Scott Morrison.

Opposition leader Bill Shorten recently promised a "root-and-branch" review of welfare payments under a Labor government, saying he wouldn't be able to live on $40 a day.

Not so Liberal MP Julia Banks who told a Melbourne radio station she could live on 40 bucks a day, saying the call to increase the rate amounted to "socialism".

And when asked if Newstart's $40 a day was "cruel" to people on unemployment benefits, Jobs Minister Michaelia Cash replied: "We focus very much on getting people off welfare and into work. The best form of welfare is a job."

The latest Deloitte Access Economics Budget Monitor also supports an increase in unemployment benefits. "Newstart hasn't kept up with national living standards for more than a quarter of a century, shrinking sharply as a share of average and minimum wages, and relative to the age pension," it said.

"And it's set to shrink even further, as it is indexed to prices rather than wages.

"We should add $50 a week to these payments, and immediately index them to wages. That would be $3 billion well spent."

One of the few mentions of older workers in the budget was the $189.7 million over five years to support those aged 45-70 to adapt and remain in work; and $17. 4 over four years for a Skills Checkpoint for Older Workers program. There was no mention of where the jobs for the "jobs ready" people will come from.

Advocacy group the Combined Pensioners' and Superannuants' Association was scathing of the lack of budget support for the unemployed.

"Newstart has lagged way behind national living standards for well over a decade and it is disappointing that the budget ignored calls to finally increase the inadequate allowance," it said in a statement.

Many older Australians have to live on this exceptionally low payment as they wait to reach pension age; they are forced to give up necessaries we all take for granted.

"The government still plans to increase the age pension eligibility age to 70, which will force thousands more people to live for longer on this meagre payment. At the same time, cost of living is skyrocketing, housing is increasingly unaffordable and there are way more unemployed people than there are jobs.