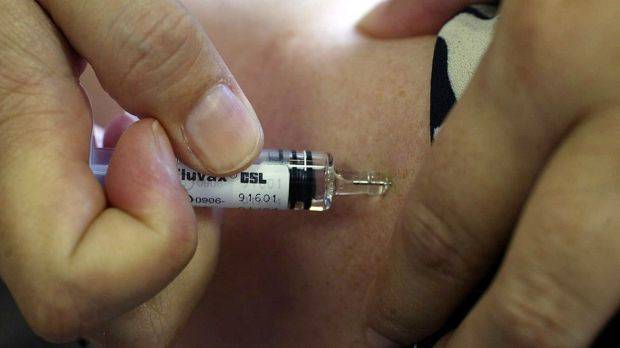 NEARLY double the number of flu cases were recorded in the ACT last year during a horror season but there was a drop in cases at aged care facilities.

NEARLY double the number of flu cases were recorded in the ACT last year during a horror season but there was a drop in cases at aged care facilities.

It comes as the chief health officer Dr Paul Kelly backed calls for the ACT government to introduce a free flu vaccine for children.

Dr Kelly said the latest figures showed last year's flu season was the biggest since the pandemic year of 2009.

Last year, there were 3099 notified cases of influenza in the ACT with 560 people admitted to public hospitals, 13 per cent of them admitted to intensive care.

The figures showed flu notifications almost doubled from 2016 while hospital admissions rose by about 40 per cent.

"There was a lot of increased activity and number of notifications but actually the disease was not more severe than previous year," he said.

"While there were more notifications and deaths reported nationally, as a proportion of the number of cases that didn't increase.

"It wasn't more severe there was just more of it."

The flu most commonly affected people aged 70 and over the most hospitalisations came in patients aged 65 to 85 with more than 300 admitted.

But there was an against trend drop in flu notifications and hospitalisations in aged care facilities.

The figures show there were 28 hospitalisations from aged care facilities dn 18 deaths.

Dr Kelly said while last year's flu vaccine proved less effective than others, it was still better than nothing at all.

"I feel we've been vindicated both with the work we've being doing with preparedness and response ... to get that result which was very different from NSW and other jurisdictions which saw large outbreaks and pressures on hospital beds," Dr Kelly said.

This week, the NSW government announced it would provide free flu vaccines for children aged six months to five years.

"They are not currently funded but since last year we have seen more cases of flu some states decided to provide free flu vaccines within their own budgets," he said.

"Anything we can do to decrease the spread of flu in under 5 group would be beneficial not only to the child but to the general control of flu through the community.

"It comes down to the feasibility of introducing that and the cost."