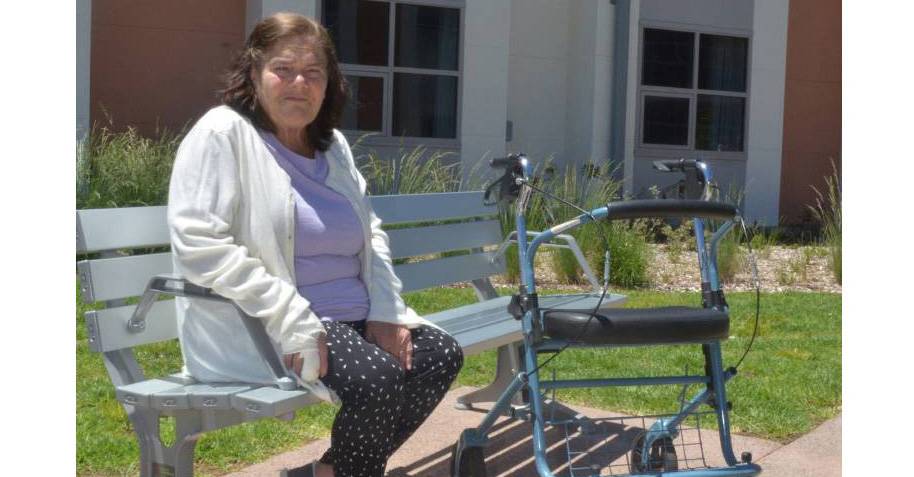 NEW HOME: Daphne is one of the first residents at the Benjamin Short Grove aged care facility at Bloomfield. Photo: DAVID FITZSIMONS

DAPHNE has finally found hope and shelter in Orange, NSW.

Being locked out of her home with nowhere to go following disputes with extended family members, unable to manage her own money and suffering health problems, the Orange woman has had a difficult past three years.

She remembers working as a fruit picker at Orange orchards and in factories in Sydney many years ago.

But she got injured, ended up on worker’s compensation, lost her job and gradually her life deteriorated.

Daphne hopes one day to be able to afford a rental house of her own.

But for now she is one of the first residents of the $16.7 million Mission Australia Benjamin Short Grove aged care facility for homeless people from Orange and Cabonne Shire.

The Bloomfield complex, with room for 60 residents, was officially opened on Monday.

It is Mission Australia’s first such facility outside of Sydney.

General manger of Aged Care, Jill Bicknell, said it was shelter at last for some of Orange’s most needy people – many who have been sleeping rough or in refuges after lives of abuse.

“They have had a horrendous life, some of them,” she told people at the launch.

“They have been beaten so badly, now they don’t have any thought process.”

The facility was opened by federal aged care minister Ken Wyatt who said the service was vital, particularly for people in regional areas, who were homeless or facing homelessness.

“It is a great story for this region,” he said.

He said the facility gave people access to basic facets of living.

“Access to services, not only a home, access to health services, other levels of support, the challenge of not finding somewhere you can bed down safely and know you can have a meal, a warm bed at night and someone who cares for you, that’s what this facility does,” he said.

“It provides three meals a day, it provides a level of love, compassion and consideration that is missing in the lives of those who now call here home.”

The facility will provide 24-hour nursing assistance plus specialist medical services including psychiatric support and physiotherapy.

“There is a growing need in this region,” she said.

“There simply aren’t enough aged care facilities like Benjamin Short Grove that specialise in caring for people with complex needs and who may have a history of homelessness or disadvantage.”

Ms Yeomans said there were particular needs in regional areas.

The facility has been funded by a $14.7 million federal government grant.

A further $1.5 million was achieved through community fundraising.