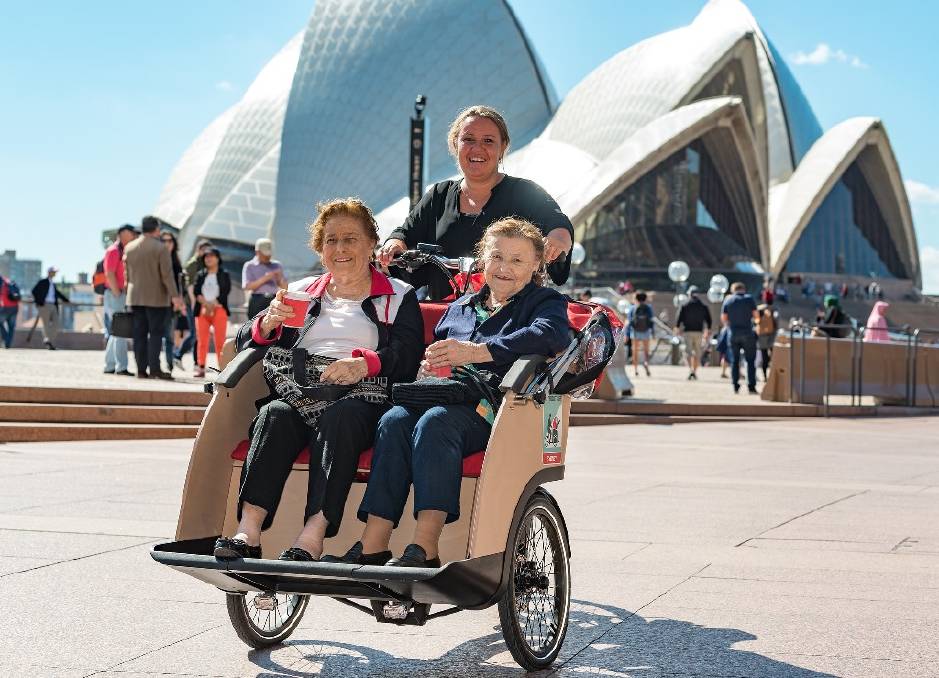 International organisation Cycling Without Age connects elderly people with volunteer cyclists who take them for rides on trishaws to help them engage with the great outdoors.

ONE year on from its launch down under, the wheels are well and truly in motion for international organisation Cycling Without Age.

The group connects elderly people with volunteer cyclists who take them for rides on trishaws to help them engage with the great outdoors.

The first Australian chapter was launched in Canberra last November, while a seventh opened in Hobart last month.

There are also chapters in NSW (Sydney, Newcastle and Tenterfield) and Victoria (Black Rock and Sandringham).

In NSW, fundraising groups are working to begin groups in Belmore, Rockdale and on the Central Coast, while in Victoria plans are afoot in Geelong and Port Lonsdale. SA and WA are also on the list.

The organisation was founded by Danes Dorthe Pedersen and Ole Kasow in 2012. Ole had begun taking elderly people for rides around Copenhagen and decided to approach Dorthe, who was then working for the City of Copenhagen, to further develop the concept. Dorthe is pleased with the organisation’s success in Australia and said the key has been its volunteers’ spirit and desire to help and learn from the elderly.

She believes everyone can identify with anxieties associated with ageing, such as the thought of moving to a nursing home, needing help to function, and loss of mobility.

“So we’d all like to contribute to a solution that may put an end to that type of isolation and loneliness,” she said. “We want all ages to be part of our societies, to make friends, to influence and have their voice heard.”

Dorthe said helping seniors integrate back into society was beneficial for the cyclists as well as their passengers. “There are so many stories and so much life experience we shouldn’t miss out on from our elderly neighbours.

“And on another note, we’d like to add to other people’s wellbeing and quality of life.”

Most young people like living life in the fast lane, but a group of young men from Danish volunteer group Cycling Without Age were more than willing to go a bit slower for the sake of some wise company.

The six volunteers used their gap year for an unusual and admirable purpose – to visit Australia and help older people get out in the fresh air and enjoy a good bike ride. During September and October, the volunteers rode from Canberra to Hobart on their trishaw bikes to spread the word about Cycling Without Age, stopping in towns and cities to offer rides.

The ride began in Newcastle on September 8 and ended in Lindisfarne, Tasmania, on October 20.