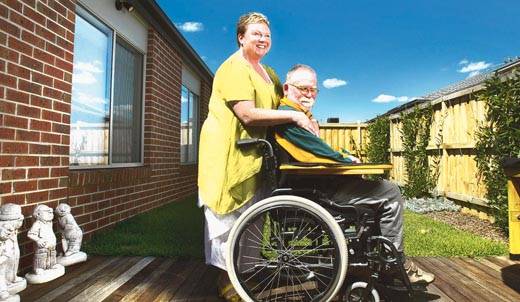 DON’T BE AFRAID TO ASK FOR HELP – Julie and Ross Collins.

FIVE years ago, life for Ross and Julie Collins changed forever when Ross suffered a substantial haemorrhagic stroke, which left the right-hand side of his body immobile.

Ross suffered a substantial haemorrhagic stroke, which left the right-hand side of his body immobile.

He had run a sports centre and was a prominent figure in indoor cricket at state, national and international levels.

Julie was a career teacher and on the way to a principal’s role.

“It all came crashing down,” Julie said. “I became Ross’ carer and thought holy crap, this is the rest of my life! How am I going to cope?”

Many plans had to be made and it was a steep learning curve for Julie.

“When Ross eventually came out of hospital and rehab, the discharge plan was effectively if anything happens, call an ambulance,” she said.

“Life became very quiet. I’d gone from busy school staffrooms to caring for someone who was still the same person inside, but now needed help doing basic things and had difficulty communicating.

“I kept my sanity early on by dealing with a whole range of people who were assisting with Ross’ care – physio, occupational and speech therapists, nurses, doctors ... I was always asking questions.

“I guess teachers tend to be a bit that way minded.

“Things have changed dramatically for us but my personality is still the same, although I think I am more of an advocate now, which you need to be in this role.”

Julie said relationships changed with different people, and some of their friends found Ross’ situation confronting. Indeed, some friends fell off the radar, but they also made new ones.

“Socialising is difficult,” she said.

“If we want to go out to a restaurant with friends, we have to make plans. I need to ensure the restaurant can cater for Ross’ diet, that there is good wheelchair access ... you can’t just make instant decisions.

“We don’t go out as much as we used to and we haven’t had a holiday since Ross’ stroke.”

With support from her family, Julie has returned to part-time work, which, she says, has made her feel a bit more like herself.

“I had three years off teaching altogether. Caring can be so isolating and I felt as if I’d lost a bit of myself in that time.

“I’ve always been a very strong person. I’m able to pick myself up. Some days are okay, some are rubbish, but you always tell yourself the next morning that things will be better today.”

“I run a carers group where we live now. It’s so good to talk to people who understand first-hand what you’re going through.

“Empathy and support from family and friends is also really important.

“But caring isn’t for everyone.

“We lived with my sister for a couple of years and she and her husband decided that if they were in the same situation, they’d opt for residential care.”

And Julie’s advice for other carers? “Remember there are many people out there you can ask for help, and join a carers group. Never stop asking questions and be a strong advocate for the person in your care.”

National Carers Week from October 15-21 is a time to celebrate carers and thank them for their dedication to their families and friends.

There are 2.8 million carers in Australia, and one in 10 Victorians play a caring role. It can be a demanding and sometimes thankless role, and it is critical that carers are supported – not only in the work they do for others but in looking after themselves so they are able to maintain their caring role.

Carers Victoria provides care and support to family members and friends with a disability, mental illness, chronic condition, terminal illness or who is an older person with care needs.