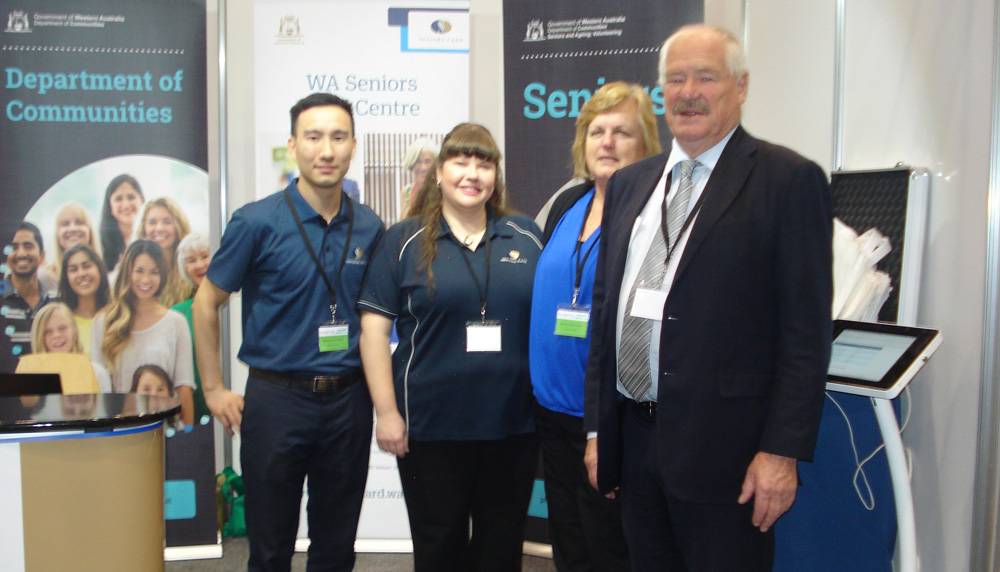 CHALLENGING TIMES – Mick Murray at the Department of Communities stand at the Care and Ageing Expo.

THE first aged care facility and community hub for Noongar Aboriginal elders is on the agenda after four years of hard work.

THE first aged care facility and community hub for Noongar Aboriginal elders is on the agenda after four years of hard work.

Indigenous community member Angela Ryder shared the vision for the facility at the inaugural Care and Ageing Expo, hosted by Leading Age Services Australia at the Perth Convention Centre in July.

A submission for a feasibility study is with the federal Department of Health via the office of Aged Care Minister Ken Wyatt.

Ms Ryder said there was a critical need for such a facility in Noongar country, which covers the South West and Wheatbelt regions through to Esperance.

“Members of my community are affected by conditions associated with ageing at a much younger age,” she said.

“While Aboriginal people make up 3 per cent of the population, we have higher rates of disability across all age groups.

“Changes occurring across our community are leaving elders without family to take on the traditional caring roles.

“Often elders are caring for their grandchildren. The need for a facility such as this is increasing.”

Ms Ryder said the facility and community hub should be managed by Aboriginal people with culturally appropriate food, language and environment.

And it should provide a “supportive, safe environment to deal with the trauma experienced or passed down the generations”.

Minimising elder abuse and overcoming isolation and loneliness of those elders whose families have moved away were vital.

“The model will be an innovative and holistic model that may well be the way of the future in aged care,” Ms Ryder said.

The vision is a joint scheme between Langford Aboriginal Association and Fortis Consulting in collaboration with Relationships Australia WA and the Indigenous community.

Opening the expo, Minister for Seniors and Ageing Ken Wyatt said it gave a bird’s eye view of the range of options available as seniors age, including the option to stay at home.

Entertainer Max Kay looked at the lighter side of ageing and urged people to do all they could to stay active.

Tax relief not on the cards

NO immediate tax relief is in sight for older West Australians looking to downsize.

WA Minister for Seniors and Ageing Mick Murray said different seniors’ groups had raised the issue with him but it was unlikely to be addressed in the state budget.

“The budget is not in great shape at the moment but I am listening to seniors’ groups and want to work with them and think about how to do things better,” he told visitors at the Care and Ageing Expo.

“It is something that should be looked at and maybe with help from the federal government we can get something done.”

Mr Murray said being a senior – he is 67 – he could relate to the issues people were facing.

Like many speakers, he noted that many people left it too late before they started making arrangements for the last stage of life.

“It’s great that we are living longer but it does present challenges for government,” he said.

“We are committed to working with the federal government to build more aged care beds and make our communities more age friendly.”