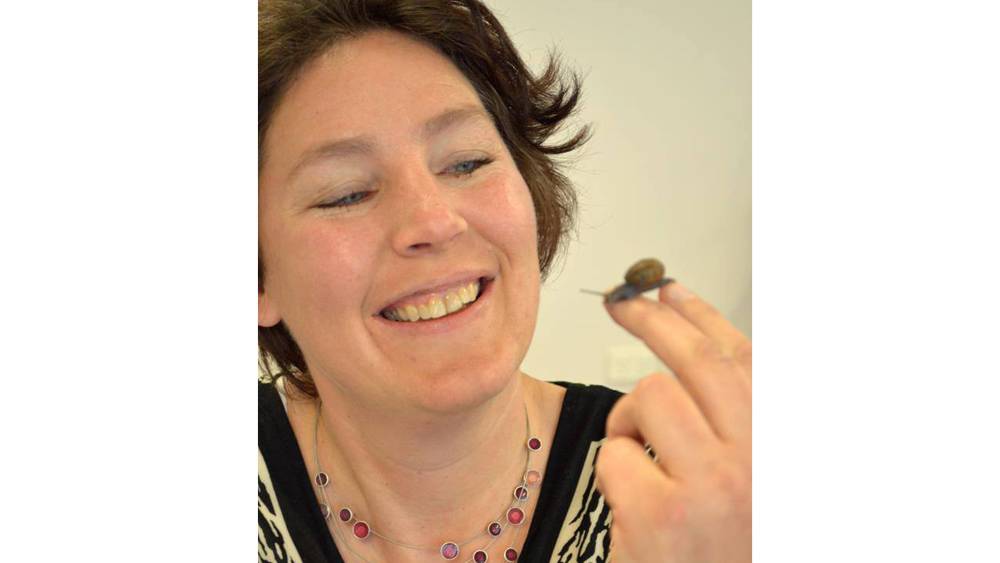 NATURAL THERAPY – Careship's Claudia Ait-Touati checks out one of her livestock.

A CARE farm in the Murray Mallee region is bringing dementia patients out of their shells – with the help of thousands of garden snails.

A CARE farm in the Murray Mallee region is bringing dementia patients out of their shells – with the help of thousands of garden snails.

The Careship Coorong snail farm is home to about 15,000 snails, all destined to end up on a plate to sate Australia’s growing appetite for escargot.

The farm in Coonalpyn, a couple of hours from Adelaide, welcomes people with early onset dementia every week to help breed, feed and harvest the small gastropods.

It is the brainchild of former hospitality worker Claudia

Ait-Touati. The Dutch-born businesswoman came up with the idea after her father was diagnosed with dementia.

“He was very depressed after his diagnosis and didn’t want to go out or eat,” she said.

That was until Claudia stumbled upon a care farm in the Netherlands.

“At the farm he was back to his old self and I thought, ‘why don’t we have anything like this in Australia?’”

About the same time Claudia was working at nearby silos and commented on how many snails there were in the grain.

When someone suggested she farm them, Claudia couldn’t get the idea out of her head. “That was when I put the two ideas together.”

Five years on, the farm welcomes up to 10 people a week and is making gourmet escargot products including snail pate and snail “sliders” (patties).

“Some of the visitors are sceptical at first, but after about half an hour they start to warm up and by the end of the session they’re talking to and even patting the snails,” Claudia said.

“They’re pretty chilled out and harmless and you can actually hear them eating.

“It’s just the slimy part that people sometimes get freaked out about. Even our project officer had a phobia of snails before she started the job!”

And with about 14,000 teeth in every snail, making sure they’re well fed is paramount for the volunteers. Other jobs include rounding up any unusually speedy escapees.

“While looking after the snails gives the visitors a sense of purpose, it’s also about being able to get their hands dirty and being outside with a group of people,” Claudia said.

“And working with snails takes the seriousness out of it. It’s a bit of fun and we all end up having a laugh.”

While her unusual livestock may be sluggish, Claudia has no intention of slowing down, with plans afoot to expand the farm and offer a dementia retreat on the property.

“We’re hoping to offer tours and have people come and stay for a few days,” she said.