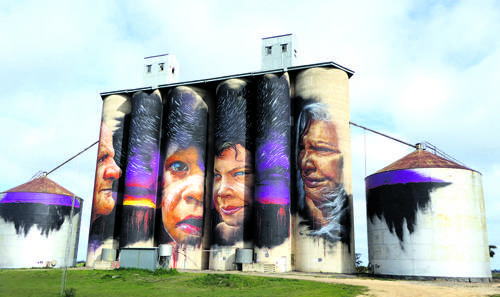 IT’S NOT GRAFFITI – The Sheeps Hill silo honours the traditional owners of the Wimmera/ Mallee region.

THE 200km Silo Art Trail in the Wimmera/Mallee region is destined to become the country's biggest outdoor gallery.

VICTORIA'S towering wheat silos have dominated the rural north-west landscape for more than a century. With many no longer in use, street artists from Australia and across the globe have transformed them into giant works of art. SUE PRESTON set out on the Silo Art Trail to find out whether the humble spray can and paint brush can transform the fortunes of small country towns.

EVERY small country town in the wheatbelt has a silo or two.

Historically they were the place where farming communities came together at harvest time to unload the grain.

When drought and tough times caused many of them to close, they became silent and idle looking down on their town’s dusty streets and shuttered shops.

Enter the artists with their paintbrushes, spray cans and cherry-pickers.

Now the 200km Silo Art Trail in the Wimmera/Mallee region is destined to become the country's biggest outdoor gallery. Already five of the six chosen grey monoliths have been painted, with the final one to begin in the next few weeks.

The essence of each town, its struggles, joys and its resilience, is depicted in the faces of the people chosen by the artist to represent the pride that exists in their town.

The trail had its beginnings in 2015 when Brisbane street artist Guido Van Helten created his famous Farmer Quartet on the Brim silos. His monochromatic photo-realistic work captured imaginations and inspired the Silo Art Trail project.

The project is led by Yarriambiack Shire Council in partnership with Melbourne street art company Juddy Roller and its creative director Shaun Hossack. It has been supported by a $200,000 Creative Victoria grant.

If travelling north from Melbourne, the trail begins at Rupanyup (population 344) where Russian Julia Volchkova has created a monochrome mural of young locals, footballer Jordan Weidemann and netballer Ebony Baker, on the huge metal grain storage bins beside the beautiful but now derelict railway station.

Thirty-six kilometres further north is Sheep Hills (where, interestingly, we saw neither sheep nor hills), which has a population of about 190. Here a striking mural by Adnate across all six silos pays homage to the Indigenous community. Represented are Wimmera elders Ron Marks and Regina Hood and children Curtly McDonald, 9, and Savannah Marks, 2.

A further 37km ahead is the town of Brim (population 150), home to Guido van Helten's Farmer Quartet, painted as a tribute to the then drought-stricken farming community.

The most recently completed silo is 67km further along at Lascelles (population 100) where Melbourne artist Rone has painted the well-known faces of Geoff and Merrilyn Horman. The couple now overlook the area where their family has lived and farmed for four generations.

Hulland was chosen for his “classic farmer looks” and strong connection to the farming community and, the story goes, because he was slim enough to fit on one of the two very narrow silos.

We meet the flannel-shirted Hulland in the Patchewollock Pub that night enjoying a quiet drink by the log fire while waiting for a delivery of poddy calves from up north.

The young farmer has received a fair amount of chiacking from his mates since landing the starring role on the silo. “Look, he’s wearing the same flannel shirt,” they joked.

So can the Silo Art Trail revitalise these towns and bring in thousands of new visitors? Only time will tell.

Locals say they are seeing more people come through but as yet there hasn't been a huge rush.

The trail is certainly deserving of visitors. Some of the small towns en route have lovely historic buildings and if you can forgo the desire for fine food and wine when you travel – this is largely the home of the bain-marie of potato cakes, pies and chiko rolls – you will be well rewarded.

THE trail can be completed in a day. I suggest you stay overnight in Stawell, three hours’ drive from Melbourne, and start fresh in the morning. Stawell has several mid-range and budget motels.

At trail’s end, the Patchewollock Hotel is a convivial place with an open fire and counter meals. Its basic rooms (with self-serve continental breakfast) are $25 per person per night. However, there is no heating or other mod cons so if you must have your TV and WiFi at night you can travel on to Ouyen where there are motels.

If you want to stop half-way through the trail, the Mallee Bush Retreat at Hopetoun on the edge of Lake Lascelles is an affordable option with prices starting at $30 per person per night.

Accommodation is in silos, cow sheds, machinery sheds, a stable and a grainstore. But rest assured these are symbolic names for modern new buildings that have been built to a farm theme. They are basic but comfortable; bring your own linen. There are low-cost powered sites, and free camping is encouraged around the lake.

Another option is to take a helicopter flight to see the trail from the air – www.grampianhelicopters.com.au

While in the area you might be lucky to run into Adele Coleman travelling with her cute caravan Clarice. The caravan is stocked with fashionable but reasonably priced shoes. Adele takes her mobile shoe shop to small country towns where women would otherwise have to travel 100km or more to buy a pair of shoes.

* Sue Preston travelled with the assistance of Visit Victoria.