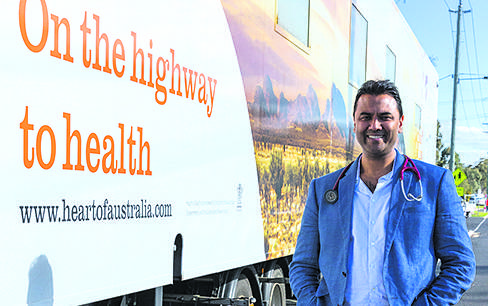 PEOPLE living in outback Queensland will benefit from increased access to specialised medical care following a heartwarming gesture by a philanthropic family.

PEOPLE living in outback Queensland will benefit from increased access to specialised medical care following a heartwarming gesture by a philanthropic family.

The Heart of Australia cardiology clinic has received a $1 million donation from a family who wished to remain anonymous.

One family member told the ABC’s Australian Story the donation was made to honour their late father’s love of the bush and belief that access to doctors in remote areas was vital.

The Heart of Australia – colloquially known as the Heart Bus – was founded by engineer turned cardiologist Rolph Gomes, who fitted out a 25-metre semi-trailer with the same specialised equipment found in a city cardiology practice.

Each month the truck travels 8000km as it visits 12 regional towns.

It also provides endocrinology and some respiratory services.

Dr Gomes said The Heart of Australia would use the donation to buy and outfit a second truck and would also look at incorporating other specialist services.

“You could never set up as a specialist in some of these areas because of the populations,” he said.

“If you go out to these areas and speak to the locals often they will say ‘We used to have a specialist in the area but they retired’. You hear these stories again and again.”

Dr Gomes founded the service because he saw lots of research being carried out into the lack of access to specialist services in rural Australia, but nobody actually doing anything about it.

He hopes the new truck will be ready early next year.

The “broad plan” was for one truck to service towns in the north and west and the other to service southern towns, with a view to possibly expanding into northern NSW.

“We have to assess the letters that have been written in and determine where the need is,” he said.

The organisation would like to hear from anyone who would like The Heart of Australia to visit their town.