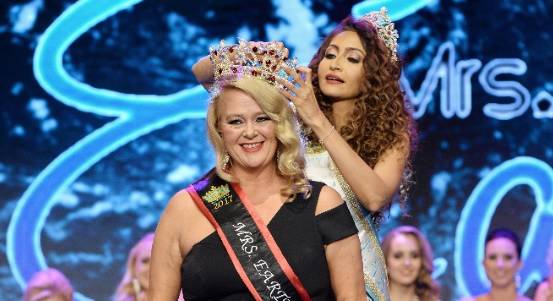 AUSTRALIA'S Suzi Dent has taken out third place at the Mrs Earth 2017 pageant in Las Vegas.

AUSTRALIA'S Suzi Dent has taken out third place at the Mrs Earth 2017 pageant in Las Vegas.

The 55-year-old from the Gold Coast beat out beauties from 36 countries.

"Apparently I beat women who won Miss World! Just goes to show that personality and 'being real' really do count," Suzi said.

Suzi isn't your average beauty queen. A self-confessed tomboy, she swapped the shorts and joggers for sequinned frocks and high heels in her attempt to bring the title to Australia.

She believes age is a state of mind rather than a life-defining figure.

"I want to help other women celebrate and embrace being over 50," she said.

"I'm a natural beauty, not a user of botox or fillers, and try to embrace a healthy mind and body with regular exercise and good nutrition."

A multiple award-winning television and advertising hair and makeup artist with 34 years' experience, Suzi is now experiencing what it's like to be on the receiving end of the beauty treatment.

She is using her pageant experience to raise awareness about a charity dear to her heart, Soles4Souls, which collects lightly worn shoes and distributes them to people in need around the world.

She has also developed a project that aims to introduce a shoe drive to every school in the country.

Suzi, her husband of 26 years, Don, and 15-year-old son, Jack, live in a home with solar-powered electricity.

The family is passionate about upcycling - furniture, clothes and household appliances.

Their mantra? New-in-the-box toys and clothes aren't necessary and upcycled bargains can always be found, better and cheaper.