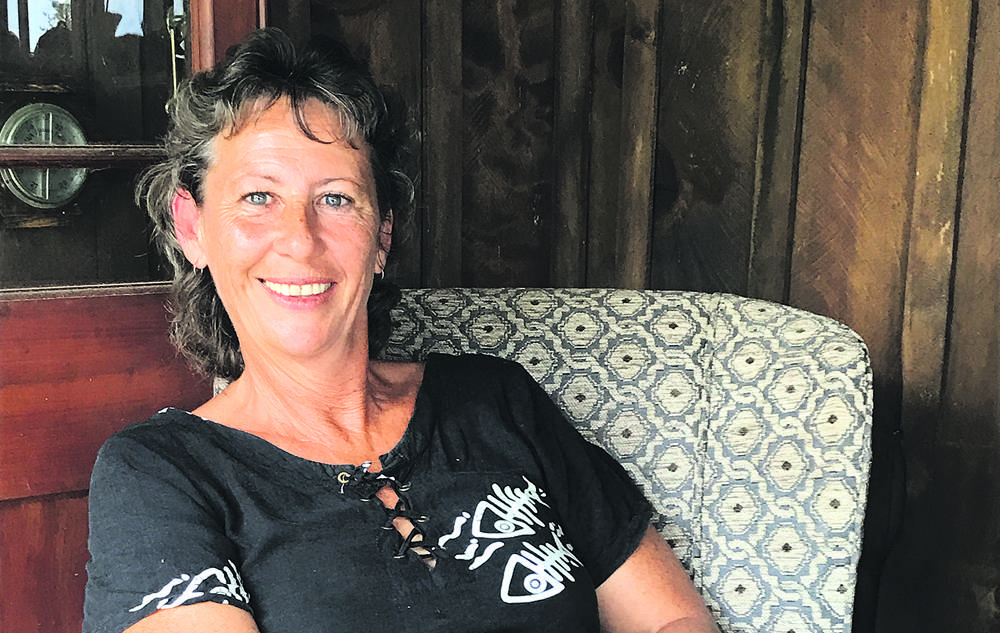 Rhonda Griffiths is proud to show visitors her family home.

FOR 37 years, Australia’s external territory of Norfolk Island has operated with its own legislative assembly – but that all changed last July.

FOR 37 years, Australia’s external territory of Norfolk Island has operated with its own legislative assembly – but that all changed last July. CHRISTINE RETSCHLAG travels to the South Pacific paradise and discovers something old, something new, and a few surprises along the way.

THE air is redolent of pine needles, sea salt, and 1970s Australia. An angry South Pacific Ocean slaps against the surrounding reef and bounces onto the island’s shores on this particular day, as if to remind visitors they’re in a remote and rugged territory.

Sure, you may have been to the Australian outback, but this is a whole new kettle of fish – or fish fry as they say here.

I’m on Norfolk Island, directly off Australia’s east coast but 1000km from anywhere.

Look around you for 360 degrees and all you will see is ocean. And if you squint a little, you will realise in many ways you’ve stepped back into 1970s Australia with all that gooey goodness you might remember.

Cast your mind back to when the shops were open for a half day on Wednesday and Saturday and you’ll find that here. No need to lock your car on this island of 1600 permanent residents; you’ll be waving to them when you pass them on the road later anyway.

As for the resident 2000 cows, they have right-of-way on the roads.

Even the road rules are a little loose, with the concept of wearing a seatbelt and undertaking a random breath test somewhat of a novelty here.

Things are still simple around these parts. You’ll hear old-fashioned radio serials on Radio Norfolk, the community radio station, and if you’re looking for a night at the flicks, head to the FernyLaneTheatre, where you can slouch in an old couch and sip on a wine, with a price list that also harks back to way back when.

The Norfolk Islander is published on Saturdays, and the local phone book is littered with nicknames.

Along the main drag The Bounty Centre is an Aladdin’s Cave of toys, games, ritz and glitz.

Further up the road you’ll find home-made soaps perfumed like Norfolk pines themselves, amid a range of lotions and potions. Walk a little more and you can buy a pre-loved book along with some organic produce grown in someone’s garden.

But things are changing.

On July 1 last year, the island’s system of self-government was replaced with a local council – a move that has caused controversy.

A staggering 68 per cent of Norfolk Islanders voted in a referendum for the right to determine their own future, but claim they have been ignored by the Australian Government.

This year, for the first time, islanders will pay income tax and, in return, will receive mainland services such as Medicare. Some residents claim they have received few services under a system designed more for an Australian country town than a remote island.

Others claim it’s just a blip in Norfolk’s already colourful history, which officially dates back to March 6, 1788, when 23 officers and convicts from NSW came to live there in search of better resources.

Captain Cook first spotted Norfolk Island back in 1774 and reported on its pine trees. Some say the Polynesians had been visiting the island for thousands of years prior to that.

You’ll learn all of this and more at the Norfolk Island Museum, which contains artifacts from the wreck of the HMS Sirius, the flagship vessel of the First Fleet.

The first European settlement lasted from 1788-1814 and supported NSW with supplies due to its more fertile land.

In 1814, everyone relocated to Tasmania and the island was totally abandoned for 11 years, save for the sailors, whalers and seafarers who stopped by.

From 1825-1855 is was reopened as a penal settlement, which took bushrangers and second offenders, some reputed to be hardcore and who were brutally punished.

Norfolk Island Museum Heritage Management Team leader Janelle Blucher says the idea was for the island to become a deterrent.

Add to its history the fact that in 1789 the Mutiny on the Bounty occurred near Tahiti, which resulted in an influx on tiny Pitcairn Island, but by 1856 the Pitcairn Islanders needed another home. Queen Victoria granted them Norfolk Island.

Norfolk IslandMuseum is one of four in the Kingston area, part of a World Heritage Site and the oldest of 11 convict sites Australia-wide.

Make sure you visit the cemetery, considered unique in that convict headstones are closest to the sea and towards the main road lay descendants of the Mutiny on the Bounty. The more recent island burials are towards the entrance.

Local historian Liz McCoy cleans the tombstones and has operated twilight tours around the Kingston area for 20 years. She says there are hundreds of ghosts on the island.

“It’s not just the history, it’s also the cruelty and brutality that went on. I don’t believe they are here to hurt you. They want you to know their presence.

“Every local has had some sort of experience. It is said to be one of the most haunted places in Australia.

“There is a part where I walk and it is like they are watching us. In the past three weeks, three different people have captured a face in the wall.”

Australian author Colleen McCullough, who died in 2015, called the island her “little slice of paradise”. On a tour with Bounti Escapes you can visit her home.

While many may be familiar with McCullough’s works, such as The Thorn Birds, few may realise her husband Richard Morgan, who still lives in the house, is a cousin of Australian singer Helen Reddy, who also has a home on the island.

The home contains a huge collection of Asian art and other relics, such as chairs from Bavarian King Ludwig’s castle and Roman glass dating back to 4th and 5th centuries AD.

For tourists, the island is slowly losing its drawcard as a tax-free haven, but there are still bargains to be had.

Visitors can save up to 30 per cent on duty-free spirits with two bottles allowed to be taken back to the mainland on production of an airline ticket and passport. Shoe shops are also pumping with cheaper sports shoes than those available on the mainland.

There’s also plenty of new things to do.

At the Jolly Roger, opened about a year ago, there’s live music five nights a week. Out at AnsonBay, the Hilli Goat Farm Tour has been operating for about two years.

Emily Ryves is the third generation to farm the property. She imported goats to specialise in cheese making and organic goat farming. On her tour, The Norfolk Way, you can view the herd and participate in milking, before indulging in a feast of goat’s cheese and other locally-made products.

Fellow Islander and local guide Rhonda Griffiths has just launched The Contemporary Islander tour showcasing her family home built during the Melanesian Mission. The 130-year-old home is a series of tradesmen huts joined together and ceilings stained with whale oil.

Wander Rhonda’s colourful gardens, sit on the verandah and taste passionfruit tart and poke. At the end of the tour, you can experience traditional weaving.

“This tour is a blend of the old and new,” Rhonda says. “We live in a beautiful house here with a lot of history.

“I want visitors to learn how we work the land. It is more about pride in our heritage and knowing where we come from. It is about guardianship.”

Air New Zealand flies direct to Norfolk Island on Mondays and Fridays from Sydney and Tuesdays and Saturdays from Brisbane, and from October-December will offer Sunday flights from Sydney – www.airnewzealand.com.au

* The writer was a guest of Norfolk Island Tourism and flew courtesy Air New Zealand.