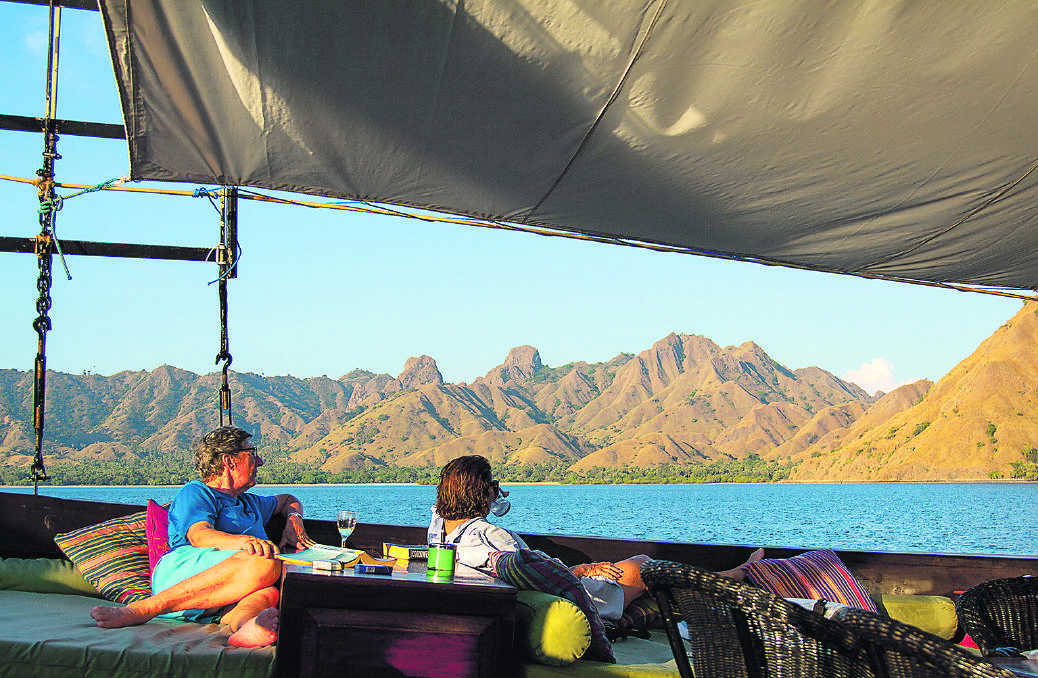 NOW THIS IS THE LIFE – Relaxing on board Al iikai.

"THIS is the best day of my life!” declares Sarah, spitting the snorkel from her mouth, an infectious grin lighting up her entire face as we tread water in a swiftly flowing channel known as Manta Alley.

“We’ve swum with manta rays and walked with dragons and it’s not even lunch time!” she enthuses.

It’s our second day looking for mammoth manta rays that inhabit Makassar Reef in the Indonesian archipelago east of Lombok.

Cruising on traditional Indonesian phinisi Al iikai, we’d anchored in the channel the previous day, launching ourselves into the water a number of times on a relaxed drift snorkel to look for mantas. We spotted just one of these elegant creatures as it briefly emerged from the depths.

Today, however, is a different story. We’ve hit the manta jackpot.

Five manta rays circle mouth-to-tail a few metres below as we hover on the surface ogling them through our masks. The largest has a wing span about the length of a small bus, while the smallest is more Mini Moke-sized.

Paddling fiercely against the current to maintain our position, we see the manta rays, their cavernous mouths rimmed by protruding cephalic lobes seemingly large enough to swallow a small human. There’s little chance of that, however, as they prefer microscopic plankton.

Despite their intimidating size they’re harmless to humans – unlike the Komodo dragons we’d seen earlier. Dragons are presumed responsible for the disappearance of humans whose whereabouts remain unknown.

These formidable lizards that look a lot like oversized lace monitor lizards found in the Australian bush, are the star attraction on a guided tour at Loh Liang onKomodoIsland.

Known as ora by locals, Komodo dragons are found on Komodo, Rinca and Padar Islands, as well as the west coast of Flores Island.

The world’s largest lizards weigh up to 100kg and are anything up to three metres in length. They’re carnivorous consumers and will eat anything: pigs, deer, carrion, water buffalo. Humans too.

Equipped with a double-pronged ability to kill their prey, they’ll use their sharp claws and serrated teeth to disembowel their victim. If that’s unsuccessful they’ve enough toxins in their saliva to poison their victim who will die a slow agonising death within 24 hours.

Our guide Juridan keeps these fearsome reptiles at bay with a forked stick and describes how adult females cannibalise their young during times of famine.

No wonder juveniles leave the nest as soon as they are able to fend for themselves – survival is a strong motivator!

While dragons, which are adept swimmers, attract much visitor attention in these parts thanks to a national park system that regulates and promotes visitation, the real star is the underwater marine world.

The currents that swirl through these waters provide a rich source of nutrients that enable coral and fish species to thrive. Cruising through waters as clear as gin, our black-hulled “pirate ship” Al iikai provides an ideal base to explore the marine world.

Built by hand using traditional methods on a beach in Sulawesi, Al iikai, which translates into Queen of the Sea, could equally refer to this striking vessel as to its Aussie expat owner Amanda Zsebik.

Growing up in Sydney’s Rose Bay she learned to sail as a teenager, instilling a lifetime love of the sea and its environs. Her enthusiasm is infectious as she encourages guests into the water.

Buying Al iikai in 2013 almost by accident, Amanda had been running a resort in east Bali for a number of years.

Coaxed by a friend to inspect Al iikai she describes a vision where she “saw my feet sink into the timber deck. I immediately felt an affinity for Al iikai and made the decision right then to buy her. It just felt right”.

She immediately stamped her style onboard, which is evident in personal touches like aromatic infusers, quality beds and linen, plump pillows and daily room servicing. As cruise director she’s a generous, caring host who embraces guests with warm hospitality.

Amanda gutted and rebuilt the 37-metre phinisi, converting her into a gentle floating luxury hotel accommodating 16 guests in air-conditioned staterooms with ensuite bathrooms and plush queen-sized beds. Upper deck cabins are bathed in natural light pouring in from large windows, while lower decks have traditional portholes.

The large foredeck with its shade awnings, plump-cushioned sunbeds and 12-seater dining table is the social hub – the perfect place to relax between snorkelling and shore excursions, eating, reading, chatting or dozing.

Most days start with a pre-breakfast swim, jumping over the side from the bowsprit for the daring, or from the boarding steps for the less brave.

Water activities dominate most days in between island hopping.

A serial snorkeller who is so at home in the water she may well have a set of gills concealed beneath her sarong, Amanda has intimate knowledge of the best snorkelling sites. Determined by wind and tide, she guides us through an extraordinary underwater world.

We drift silently past an endless carpet of dusky pink soft coral, tentacles waving gently in the current. Elegant batfish glide effortlessly and turtles forage on seagrass, unfazed by our presence. Bright orange clownfish dart in and out from their anemone habitats primping and preening for our cameras. Curious and endearing, some are barely bigger than a fingernail; others are the size of my hand.

Anchored on the northern coast of Sumbawa Island we visit the village of Wera where the sound of hammering rises above the dawn chorus of crowing roosters.

Dominating the beach are timber boat hulls in various stages of construction. Much-respected Bugis seafarers who originate fromSulawesi are lauded as master shipbuilders. For generations they’ve been building boats without blueprints, sketches or calculations, constructing mammoth vessels by eye and instinct.

The shape of each vessel’s upswept bow and eventual hull line is determined by the shape of the log used for the keel, which is the first piece of the maritime puzzle. Planking is held together using wooden dowel plugs, while gaps are caulked with coconut husk fibre hammered into place, swelling to minimise leaks once immersed in seawater.

While the men build boats the women of Wera are famously known for their colourful woven cloth. Crafted on hand looms passed down through families, bolts of fabric can be bought direct from the women’s homes.

I can’t resist buying a bolt of these gorgeous fabrics, which are used onboard Al iikai to cover cushions scattered on sun lounges and sofas.

Returning to Al iikai, our ship looks completely at home in these “boat birthing” waters. Attentive Bugis crew welcome us with chilled towels and cold drinks before donning their seafarer caps and upping anchor.

Bathed in a golden glow from a sinking sun we sail into the twilight, as relaxed and contented as our crew.

Al iikai is a luxuriously appointed phinisi (traditional Indonesian two-masted sailing ship) with cruise director and 10 crew. It can accommodate up to 15 guests in a mix of twin, double and bunk rooms. Cruises depart from Bali or Lombok with varying itineraries depending upon the time of year.

The Island Explorer seven-day, six-night cruise of the North and South Gilis starts at US$1450 per person twin share – www.indonesianislandsail.com