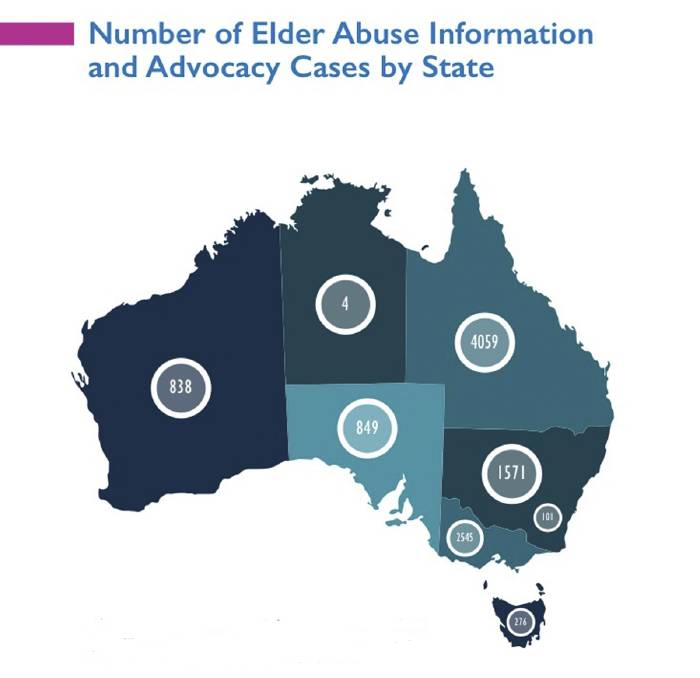 It shows Queensland had by far the greatest number of elder abuse information and advocacy cases in 2014-15 at 4059.

Victoria had the next highest figure at 2545, followed by NSW with 1571, South Australia with 849, Western Australia with 838, Tasmania with 276 and the Northern Territory with 4.

Both Queensland and Victoria have well established elder abuse reporting services and have run successful educational campaigns on the issue.

Nationally, calls to elder abuse agencies increased from 3159 in 2013-14 to 6515 in 2014-15.
Advocare chief executive Greg Mahney said the increase demonstrated the importance of raising the profile of elder abuse.

"The significant increase in calls to helplines across Australia in the last 12 months shows that elder abuse is being recognised in the community, but there is still much work to be done to identify people who are suffering," he said.

"This was closely followed by financial abuse, which was reported in 37 per cent of cases."

He said nearly 90 per cent perpetrators of elder abuse are family members, with adult sons and daughters making up 63 per cent.

Typically, abuse occurred in the person's own home.

Research suggests about 4.6 per cent of older people in Australia have reported experiencing elder abuse, but the real figures are likely to be much higher.

"Many cases go unreported for reasons of self-blame, shame and fear, and many older people suffer in silence," Mr Mahney said.

The report was released as the Australian Law Reform Commission released its issues paper informing its national Inquiry on Elder Abuse.

The inquiry, announced this year, will seek public comment on how legal frameworks can best be used to stop elder abuse.

The issues paper seeks comment on issues including whether tighter regulation is needed for Centrelink payment nominees, who can collect payments for an older person, how to prevent abuse of carer payments and the formalisation of family agreements (when an older person typically hands over assets to a family member in exchange for a promise of care).

In addition to looking at laws, the Commission will consider policy and practice guides, codes of conduct, standards, education, information sharing and the interaction of commonwealth, state and territory laws.

"With Australia's population ageing, the potential for elder abuse to affect a significant number of people in the community is very real," Commission president Professor Rosalind Croucher said.

"It is crucial to look at how we can provide better safeguards for older people from this abuse.

"Protection and autonomy are the two key principles that will inform this Inquiry.

"The Terms of Reference emphasise that all Australians have rights, which do not diminish with age, to live dignified, self-determined lives, free from exploitation, violence and abuse; and that laws and legal frameworks should provide appropriate protections and safeguards for older Australians, while minimising interference with the rights and preferences of the person."

Submissions are due by August 18.