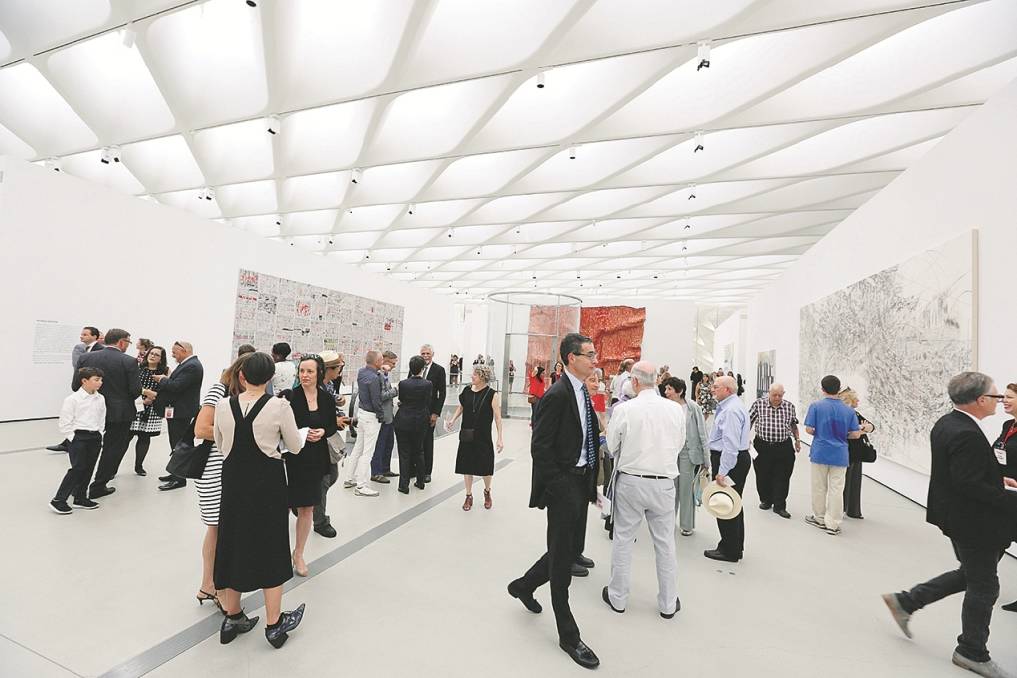 LOS Angeles philanthropists Eli and Edythe Broad have given the city of Los Angeles and art lovers throughout the world a new contemporary art museum, The Broad (pronounced Brode).

LOS Angeles philanthropists Eli and Edythe Broad have given the city of Los Angeles and art lovers throughout the world a new contemporary art museum, The Broad (pronounced Brode).

It is regarded as one of the most prominent holdings of post-war and contemporary art in the world.

Mr Broad described the museum and the collection within as “our gift to Los Angeles”. Entry is free.

“Edye and I love collecting contemporary art so we can share that experience with the public,” he said.

“We want as many people as possible to have access to the arts.”

Los Angeles is mostly known for its movie stars and shopping on Rodeo Drive, but in fact it is home to more galleries and museums than any other city in the United States.

The city is home to a range of works, from Van Gogh’s Irises and Diego Rivera’s Flower Day to Auguste Rodin’s The Thinker and Thomas Gainsborough’s The Blue Boy.

Here are 11 masterpieces you would not expect to find in Los Angeles:

Vincent Van Gogh, Irises, the J. Paul Getty Centre. One of Van Gogh’s most famous works, it was created in 1889, the final year of his life. The painting was inspired by his garden and contains influences from Japanese woodblock prints. In 1987, Irises became the most expensive painting ever sold, setting a record which stood for more than two years.

Pablo Picasso, Woman with a Book, the Norton Simon Museum. Painted in 1932, it is a dream-like portrait of Marie-Therese Walter, his mistress at the time. Picasso met the much younger Walter by chance outside a Paris department store.

Diego Rivera, Flower Day, the Los Angeles County Museum of Art. The famed Mexican artist created many paintings representing the indigenous peoples of Mexico. Flower Day, painted in 1925, is one of his most famous. Katsushika Hokusai,

The Great Wave off Kanagawa, at the Hammer Museum. The woodblock print is the first in Hokusai’s series of prints and his most famous work. It is one of the most recognised works of Japanese art in the world.

Pierre-Auguste Renoir, La Promenade, at the Getty Centre. One of Renoir’s most beloved paintings, it is exhibited in the same room as Van Gogh’s Irises. Renoir, together with Claude Monet, was one of the founders of Impressionism.

Rene Magritte, The Treachery of Images, Los Angeles County Museum of Art. A masterpiece of Surrealism and an icon of modern art. The Belgian artist challenges the conventional notion of identifying an image of something as the thing itself.

Auguste Rodin, The Thinker, the Norton Simon Museum. The bronze sculpture on a marble pedestal was first cast in 1902. It depicts a man in deep meditation and is often used to represent philosophy. This is one of a number of casts throughout the world. Lansdowne Herakles, at The Getty Villa. Found near the ruins of Roman emperor Hadrian’s villa, it portrays Greek hero Hercules with a club over his left shoulder and the skin of the mythic Nemean Lion in his right hand.

Thomas Gainsborough, The Blue Boy, at The Huntington Library. Created in 1770, it is a portrait of Jonathan Buttall, the son of a friend. Gainsborough dressed his subject in a costume dating from about 140 years before the portrait was painted.

John Singer Sargent, Dr Pozzi at Home, Hammer Museum. The painting is a portrait of Dr Pozzi, a renowned French surgeon known as the father of French gynaecology. Unlike the black frock a 19th-century physician would typically wear, Dr Pozzi is depicted in a blood red dressing gown.

Rafaello Sanzio, Madonna and Child with Book, at The Norton Simon Museum. Circa 1502-03, the Madonna’s silhouette encloses the child and frames the book, which is further emphasised by the touching hands that hold it.