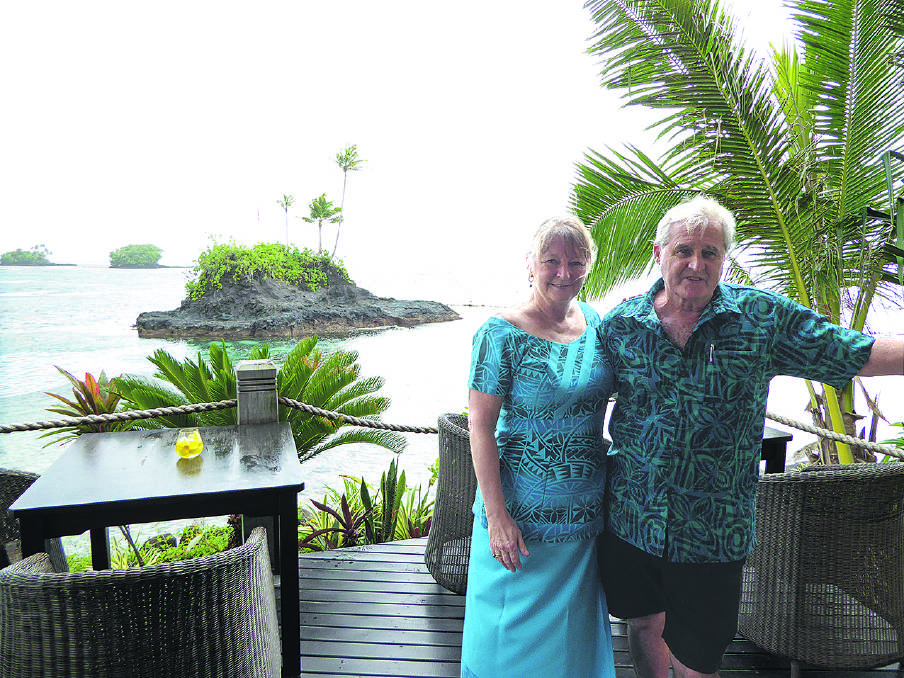 WHEN Seabreeze Resort won Samoa’s leading hotel for the third year in a row late last year it was not just a personal victory for owners, former Sunshine Coast residents Wendy and Chris Booth, but a victory for all their Samoan employees and local villages too.

WHEN Seabreeze Resort won Samoa’s leading hotel for the third year in a row late last year it was not just a personal victory for owners, former Sunshine Coast residents Wendy and Chris Booth, but a victory for all their Samoan employees and local villages too.

The couple’s late night drive back to the resort from the airport after the World Travel Awards in Hong Kong should have taken just over an hour. Instead it took more than five hours as the villagers, holding flaming lanterns aloft, lined the roadway offering their congratulations.

Others ran in front of the car, passing a specially made banner from one village to the next.

“It was a surreal experience,” Wendy said. “They really saw the award as theirs, as an honour for their district. It was like bringing home the World Cup.”

At a church service in the local village a day later, a parishioner also tells me about the night everyone stayed up until the wee hours to be part of the celebrations.

“When people are employed at Seabreeze from the village, it honours the village,” she said. “Chris and Wendy are very well respected for what they have done both for the village and the church.”

The relationship between the Seabreeze owners and the villagers is a tight-knit one, particularly since the devastating tsunami in 2009. The resort, which the couple had built some years before, was destroyed. Fortunately there was no loss of life.

“But we had nothing,” Wendy said. “We had no clothes, not even underwear. “The people from the villages brought their own washing powder down so we could start to clean up. It was a humbling experience.

“They fed us and worked with us clearing the debris. Gifts came from people we didn’t even know. Someone gave us a pair of reading glasses. “People said to us ‘Are you going to stay here now?’ But how could we walk away after that?”

So Seabreeze on the island of Upolu’s south-east coast was rebuilt, finally re-opening in 2011 with 11 air-conditioned villas including the ultimate Honeymoon Point House.

It was a massive effort with Chris, 67, and Wendy, 57, admitting they had but one day off in the first year of rebuilding and two days off in the second year.

The result is stunning. The villas, all with ocean, lagoon or reef views, are beautiful, and guests have the choice of relaxing by the infinity pool, lazing on the beach, snoozing in their private hammocks, swimming within the protection of the pristine lagoon, kayaking in glass-bottom boats, enjoying a massage on their private deck or snorkelling among the beautiful coral and fish in the lagoon.

Guests are also spoilt for choice when it comes to dining. Fresh seafood is a specialty. Going to breakfast one morning we pass a fisherman in the car park with lobsters he’d laid out in a row under the chef’s discerning eye.

You can also arrange for dinner to be brought to your deck. The service is what brings guests back time and time again. Staff stay for an average of seven years and one man tells us he walks for four hours each day getting to and from the resort. He mentions it as casually as if it was a mere 15-minute train ride.

We stay at Honeymoon Point House (you don’t need to be a honeymooner) at the far end of the resort behind a thatched gate. Beyond is a beautiful villa with windows on three sides looking out over the sea. The louvred windows are designed to provide cross-ventilation from the sea breezes.

Each day tropical flowers are scattered across the bed inside as well as on the day bed on the large deck overlooking a small rock island, a matai (chief) burial ground.

The bathroom’s expansive windows also overlook the water and are framed with hibiscus. Outside a private spa is flanked by deck chairs.

Because Seabreeze is so much a part of the community, Friday is cultural night celebrating the 3000-year-old custom Fa’a Samoa (The Samoan Way).

Age-old customs are still an integral part of life here, and are something the Booths are careful to foster and nurture. While watching beautiful traditional dances we feast on oka, which is fresh raw fish marinated in lemon juice and finished in coconut cream, sashimi-quality tuna on papaya and chilli salad, crispy breadfruit chips, seafood poached in coconut cream with tomatoes and onions, baked chicken with taro leaves and roast suckling pig.

It’s tempting not to leave the resort but it’s worth at least walking to the village with its open-sided fales (homes) encircling the malae (village green).

Each village has a meeting place where its affairs are discussed and decided upon, and one or more churches that offer traditional services on Sunday to which visitors are welcome.

It’s a cliche, but Seabreeze is the sort of place dreams are made of.

While there we hear talk about a couple due to arrive soon on their honeymoon. Apparently long before the woman met her future husband she read a story about Seabreeze. She kept the clipping under her pillow because she was determined that when or if she married, she would honeymoon here.

For Chris and Wendy Booth, Samoa is home now. Wendy admits she’s not looking forward to a time when either advancing age or ill health force them to give up the island life they love so much. However, and fortunately for future guests, that time is a long way off yet.

HIRE a car, take a taxi or wave down one of the brightly coloured buses to take you around the island.

The To Sua Giant Swimming Pool, also known as The Trench, is not far from the resort.

Two giant holes are joined via an ancient lava tube cave. The 30-metre deep swimming hole is a brilliant turquoise and can be accessed by a steep, almost vertical, ladder. Visit the home (now museum) of the late Robert Louis Stevenson who spent his final years here in the 1890s.

The locals say Stevenson was different to other Europeans in Samoa in that he treated them like family. He was known as Tusitala, which means “teller of tales”.

* Sue Preston was a guest of Seabreeze Resort and Samoa Tourism Authority.

FROM April, Seabreeze Resort will become the first adults-only resort in Samoa.

It will also introduce a complimentary in-room mini bar with a selection of wines, beer, soft drink and nibbles, replenished daily.

Prices start from $NZ408 per night for an Ocean View Villa with a-la-carte breakfast and complimentary cell phone during your stay.

The drier season is May to October. However, the weather is warm and balmy year-round with temperatures around 29 degrees.

Always ask permission before entering any land or beach. All land in Samoa, including beaches and major tourism sites, is either owned by an individual or a collective village.

Because of this many sites have a customary entrance fee which helps with the upkeep of the site and the welfare and schooling of the family.

Samoans are devout Christians. Each night there is a curfew between 6.30 and 7.30 where people must not move around the village but must devote themselves to prayer.