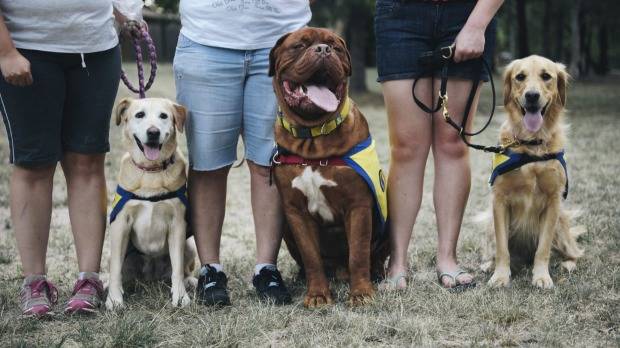 MindDogs Delilah, Doogle and Molly with their owners. The service dogs help their owners with managing their mental illness. Photo: Rohan Thomson

mindDog is an organisation that assists owners with mental illness to train their own dogs to become service dogs.

She used to be afraid to leave her Chisholm home, often preferring to fall asleep hungry than to venture outside to buy food.

That was until she stumbled across mindDog in 2012, an organisation that assists owners with mental illness to train their own dogs to become service dogs.

With the help of a certified trainer, the 32-year-old taught her six-year-old labrador, Molly, to help her overcome panic attacks. "She performs a task called grounding, where she basically becomes deadweight across my body and when I eventually feel that weight on me I come back and think OK, I'm safe, she's here," she said.

"She paws at me when I'm shaking as I'm unaware I do it, she wakes me up from night terrors ... she will guide me out of crowded areas – since I'm agoraphobic – when she notices that something isn't right."

Molly is much more than a "man's best friend" to Angel, who chose not to use her real name.

The two spend every waking and sleeping moment together, even when travelling between Angel's work desk and the printer.

"This is a dog that I have trained from scratch. It's something that is very special, extremely rare and unbreakable, which can be said for all mindDogs and their owners."

Angel, who is now an ACT mindDog director, runs the Canberra branch with a handful of other volunteers.

There are about 60 mindDogs in the ACT and 400 in Australia.

The organisation began in Sydney in 2011 after founder Cath Phillips pushed to have her dog trained and accredited as an assistance dog to help her with her own mental illness.

There was apparently no existing system of its kind in Australia.

With a trainer and psychologist, she helped make a "public access test" used in America become recognised in Australia. It ensures the dog is calm and reliable when in public. All mindDogs must pass the test yearly.

"They have to be unfazed by shopping trolleys, noise, people coming up to them," Angel said.

But it's worth the trouble of explaining, she said.

"When you you see one of our dogs in action, helping a handler through a PTSD episode, you appreciate what they do."

"There is always hope. A mindDog can make a world of difference to someone's life."